There aren’t many smartphone brands that have been able to make such a massive impact in such a short span of time. Many have tried and failed. Realme has been one of those rare brands that has been consistently delivering stellar smartphones across various price ranges. The company started with the budget and mid-range segments, and is now confidently standing toe-to-toe with premium brands like OnePlus. Realme has managed to diversify its smartphone lineup, from the C-series to the so-called number series to the high-end X series. As ambitious as the company is in 2020, it hasn’t forgotten its roots, which is the number series. And the Realme 6 series is proof that this is where the brand really wants to show its strength.

The Realme 6 series is just out and includes the vanilla Realme 6 and the Realme 6 Pro. While we say vanilla, the Realme 6 is anything but regular. It is truly a massive upgrade in every which way to its predecessor, the Realme 5 Pro (review). In fact, the company wants the Realme 6 to be known as the new “Pro.” 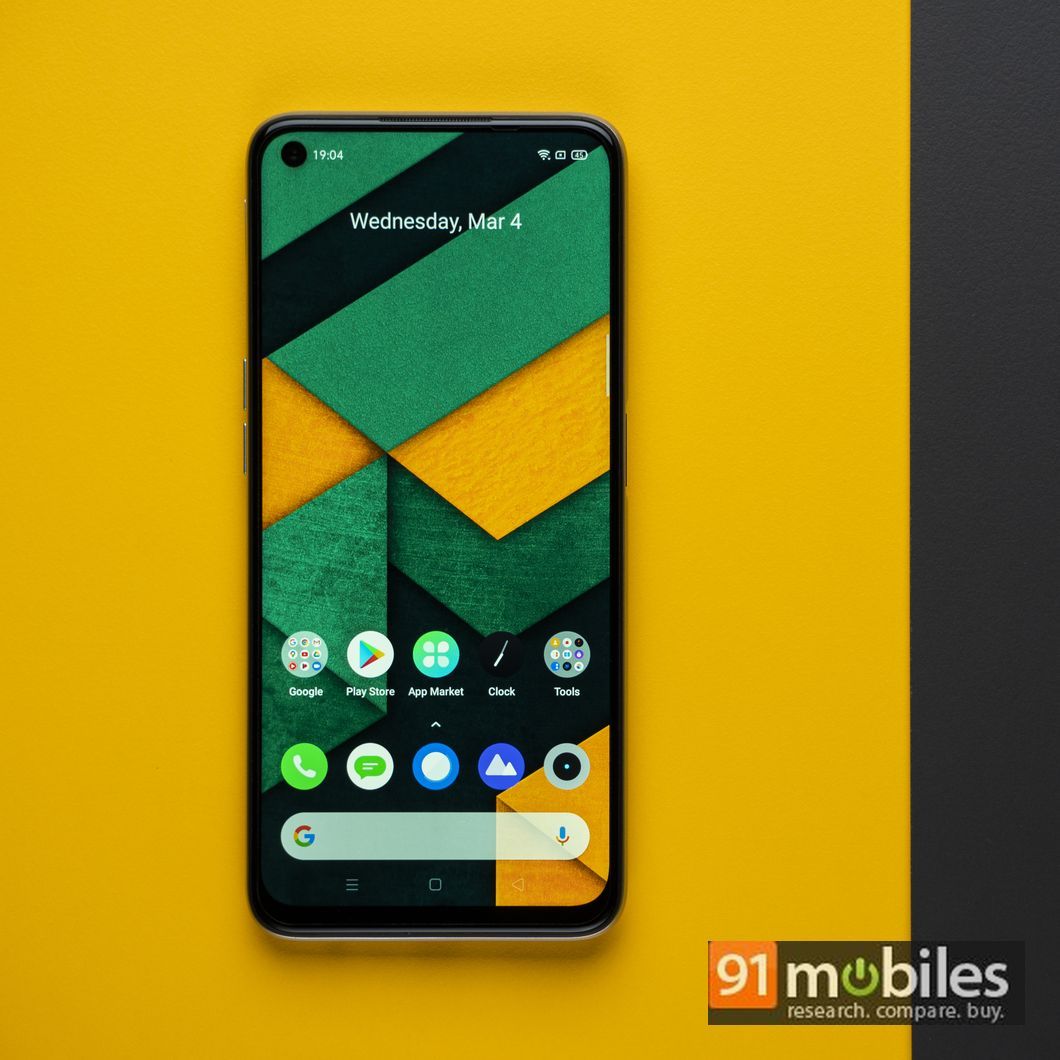 The Realme 6 is proof that one really doesn’t need to spend a bomb to get a capable smartphone. Realme 6 price in India starts at Rs 12,999, and for your money, you get a 90Hz display, powerful Helio G90T SoC, a 64MP quad camera setup and 30W fast charging, easily making it one of the best smartphones in its segment, at least on paper. Thankfully, the phone delivers where it counts, and barring the battery life, which could be better, and some spammy notifications, we didn’t find much to complain about the smartphone. For its price, we think it’s a complete package and well worth a buy.

Why pay in full when you get EMIs with 0% interest?
Buy the Realme 6 now and pay later in flexible EMIs!
Know More

In spite of how similar Realme phones look, the company has managed to set them apart by offering a unique finish on the back of each smartphone. The Realme 5 Pro had a crystal design with diamond-shaped patterns on the back. With the Realme 6, you get what the company calls a Comet design, where you see streaks of light on the rear panel originate from the bottom center of the panel. It sure looks unique, but it’s probably not the best finish that Realme has offered so far. 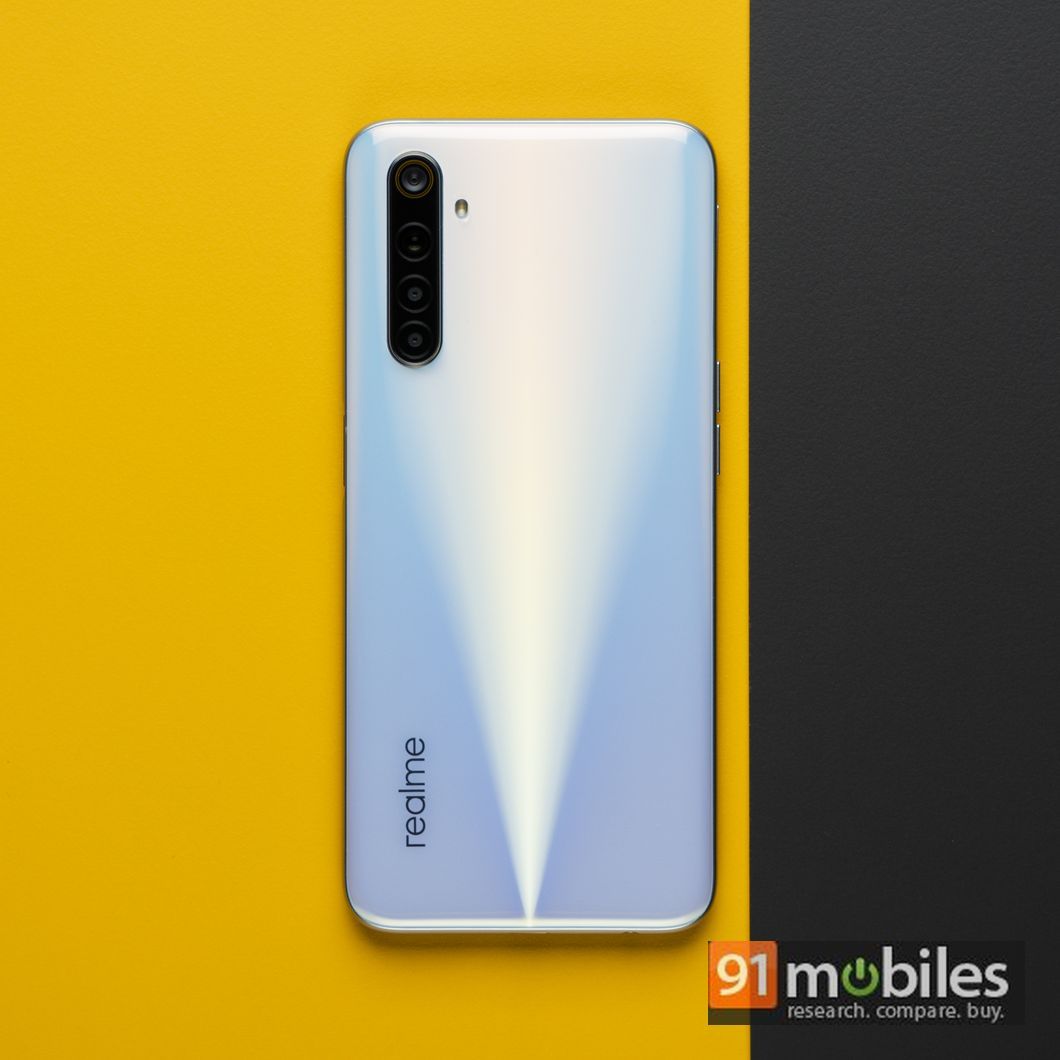 The Comet design comes in two colours – Comet White and Comet Blue. We got the white variant for review, and it is an elegant colour with hints of bluish and pinkish hue when seen at certain angles. The Realme 6 feels sleek and light despite weighing around 191 grams. The curved rear panel is plastic, which means it is more prone to scratches compared to glass. The white colour variant also benefits from not registering too many fingerprint smudges. 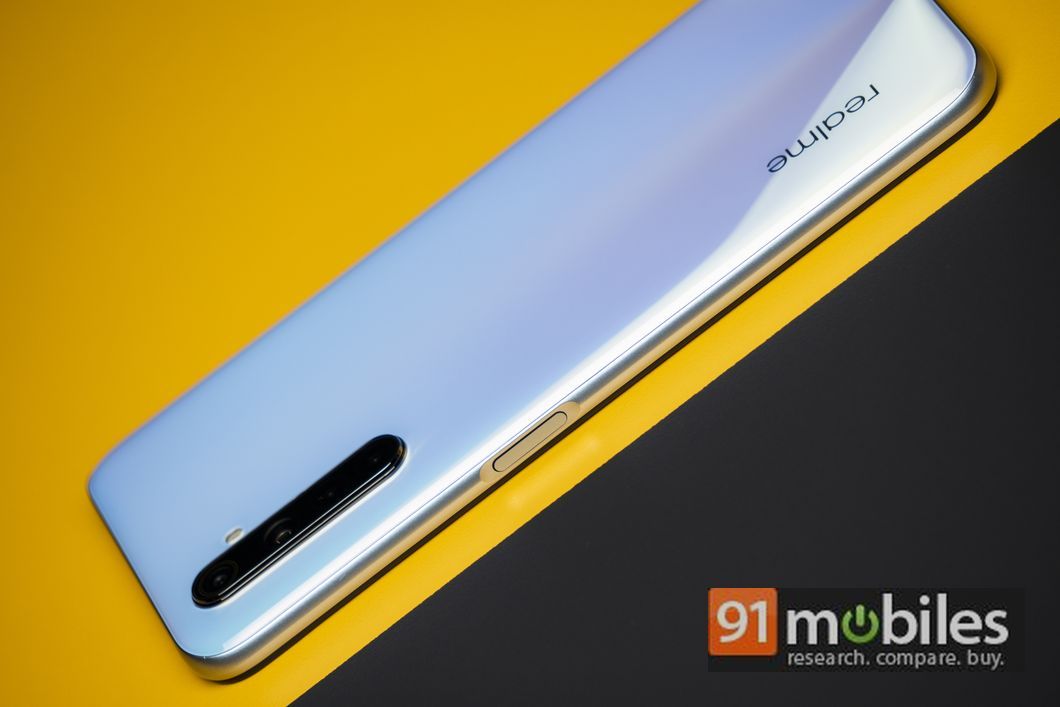 Realme has moved the fingerprint sensor from the back to the right side of the frame. An interesting design choice, and one that actually makes a lot of sense. The side-mounted fingerprint sensor is placed slightly above the centre, so your thumb naturally rests on it the moment you pick it up. After a brief getting used to time, you will eventually find your thumb naturally falling on the sensor through muscle memory.

The Realme 6 supports a triple card slot that can house two nano SIM cards and a microSD card. The bottom of the frame sees a 3.5mm headphone jack and speaker grille flanking the Type-C port.

Realme has upgraded the display from a 6.3-inch FHD+ waterdrop screen on the Realme 5 Pro to a 6.5-inch FHD+ (1,080 x 2,400) punch-hole display on the Realme 6. It has also increased the refresh rate from 60Hz to 90Hz, which is quite impressive given the price of the phone. In fact, the Realme 6 is the cheapest phone right now to offer a 90Hz LCD display. The high refresh rate means the scrolling experience is going to be smoother. And honestly, this makes the budget phone feel faster and more responsive than what you would typically find on a smartphone with a 60Hz screen. 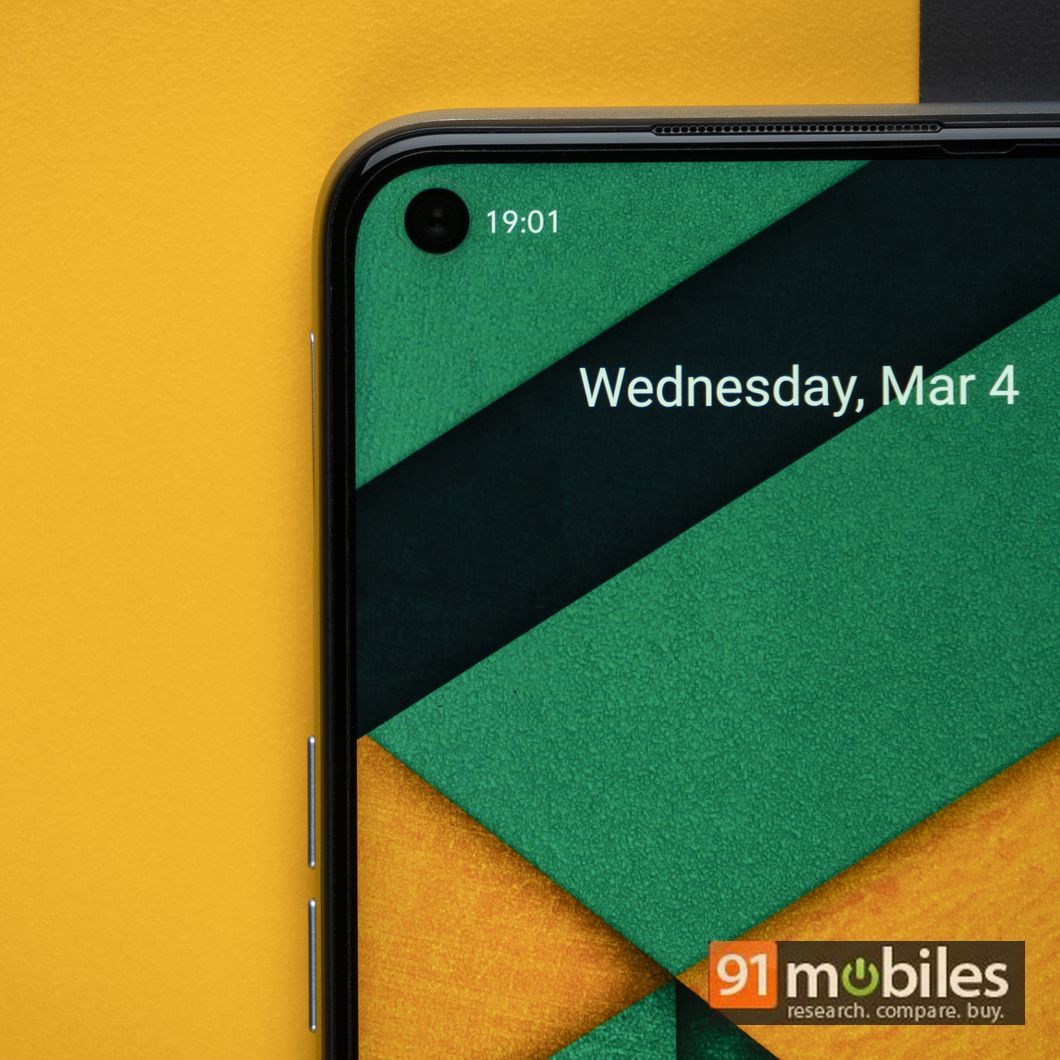 The Realme 6 display looks great with its slimmer bezels. Not only do you get a fluid scrolling experience with the 90Hz refresh rate, but the FHD+ resolution also looks sharp. The LCD panel offers good colour reproduction, although the display is on the cooler side of things, but you can change the colour temperature to your preference in settings.

The corner punch hole on the display is easy to ignore when watching videos or playing games. The display is sharp and viewing angles are decent. Brightness levels are fine indoors, but can be disappointing when outdoors under intense sunlight as the display gets harder to read.

By far the biggest upgrade to the Realme 6 is the processor. The phone is powered by the 2.05GHz octa-core MediaTek Helio G90T SoC, which is the same chipset that powers the Redmi Note 8 Pro. The Helio G90T is a gaming processor that delivers a smooth, lag-free gaming experience and snappy day-to-day usage. Realme 6 base variant starts at 4GB RAM and goes up to 8GB RAM.

In terms of benchmark scores, the Helio G90T blows away the Snapdragon 665 SoC that powered the Realme 5. It scores around 2,90,000 on AnTuTu, which is at par with what the Redmi Note 8 Pro (review) scored. Notably, the Realme 6’s Helio G90T also outscores the Realme 6 Pro’s Snapdragon 720G SoC. You can check out the scores of all three smartphones below (left to right – Realme 6, Redmi Note 8 Pro and Realme 6 Pro).

When it comes to real-world usage, the Realme 6 performs incredibly well. We saw no problems while multitasking on the 8GB RAM variant that we received for review. Day-to-day tasks such as browsing social media apps like Twitter and Instagram, checking mails and texting on WhatsApp were all handled with ease. The 90Hz refresh rate makes the scrolling experience on these apps ever so smooth, although there were a few times when we faced sudden jerks while scrolling. 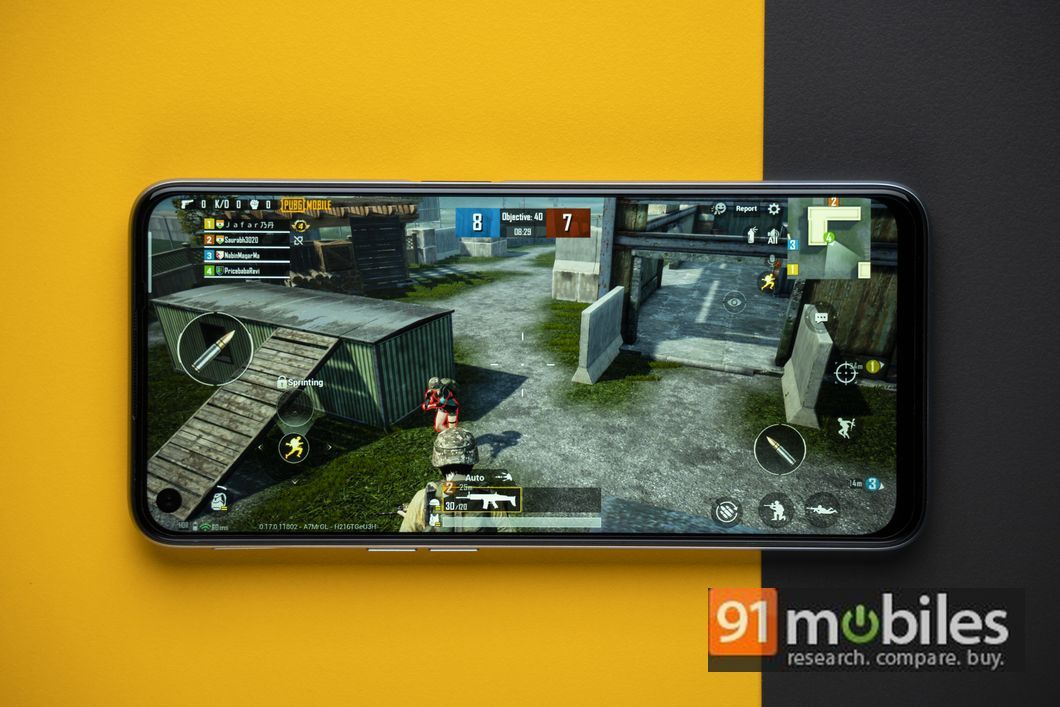 There’s not much to complain about when talking about the Realme 6’s gaming performance. We ran games like PUBG and Call of Duty: Mobile on default high graphics and the experience was generally great. These games ran extremely smoothly with no lags or stutters. Even after cranking up the graphics to extreme settings, the Realme 6 delivered a consistently smooth experience, but we did notice the phone get quite warm during gameplay.

Realme 6 ships with Android 10-based Realme UI. It’s the latest skin from the company that tries to replace ColorOS on a symbolic level. In reality, Realme UI still looks like ColorOS, albeit with a cleaner interface. By cleaner we mean the app icons and themes get a redesign. Realme UI still brings some bloatware in the form of pre-loaded apps like Opera, UC Browser and Helo, among others. Additionally, we also received a lot of spammy notifications from the default browser app, UC browser and so on. You can manually disable the notifications via settings, but they can still be annoying nonetheless.

Realme UI gets some neat features like an enhanced dark mode that turns the entire UI pure black, consistent visuals with rounded app icons and appealing colour tones, and Dual-Mode Audio that lets you connect your Bluetooth and wired earphones simultaneously.

Simply put, the powerful Helio G90T chipset combined with a high 90Hz refresh rate and snappy Realme UI software makes this affordable mid-range smartphone feel fast and buttery smooth, and is at par with the Redmi Note 8 Pro as one of the most powerful sub-Rs 15,000 phones in the market right now.

Realme 6 comes with a quad camera setup that includes a 64MP Samsung GW1 primary sensor, an 8MP wide-angle lens, a 2MP macro lens and a 2MP mono lens. The 64MP high-resolution sensor means you can expect some crisp and detailed daylight shots. The camera UI is pretty user friendly as you can easily switch between different shooting modes such as Video, Night mode, Portrait and 64MP mode by swiping through the bottom carousel. The Ultra Macro, Expert, Slo-mo and other options are tucked away under the ‘More’ section. On the top of the viewfinder, you’ll have options to enable HDR, Chroma Boost, flash and so on. 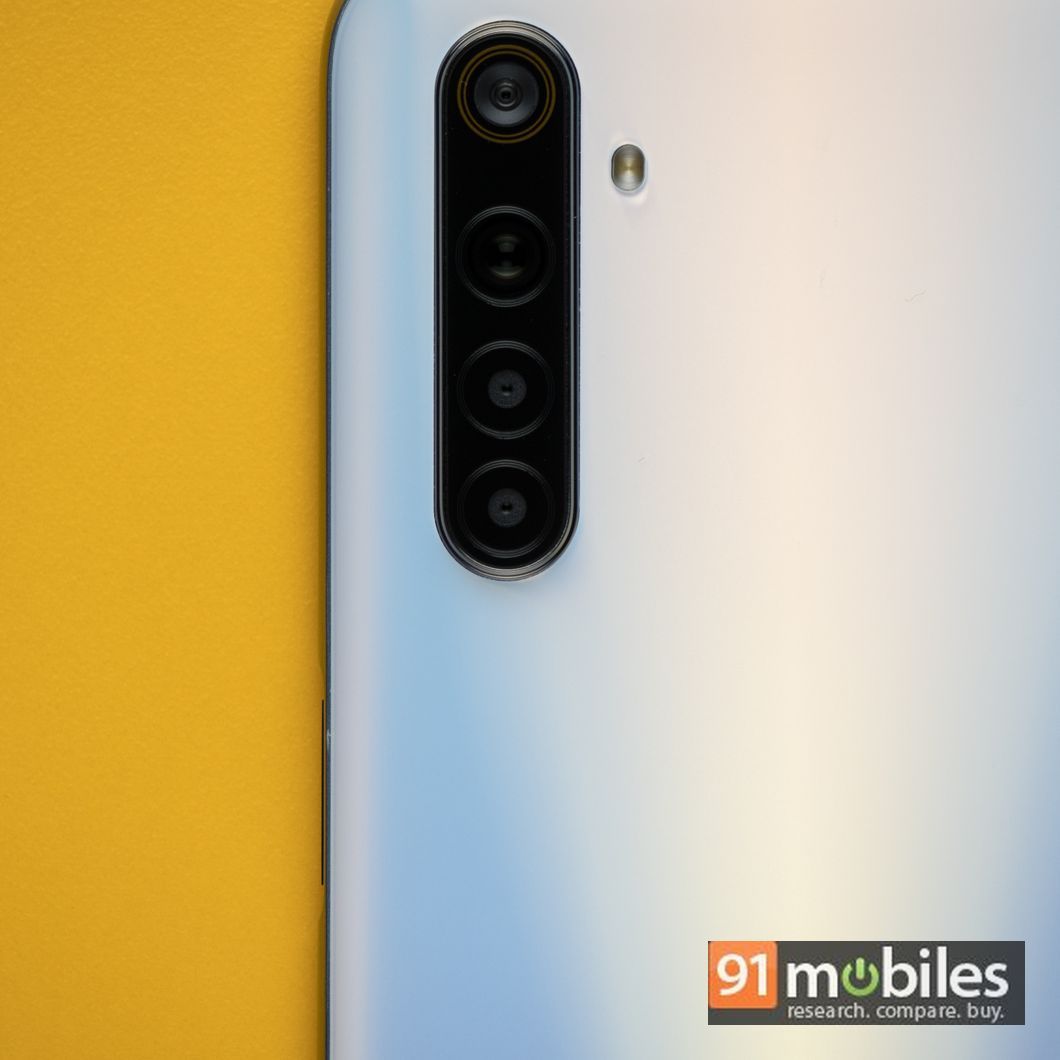 Daylight photos captured using the main camera often deliver bright and vibrant photos with HDR and Chroma Boost enabled. Colours can sometimes look too unnaturally saturated with Chroma Boost, and you will be able to capture more natural-looking colours with the feature turned off. Be default, the main camera shoots in 16MP resolution and uses pixel binning to make photos look brighter and clearer with good contrast. You can easily switch to the 64MP raw camera, which is best used in daylight conditions if you’re looking for extremely detailed photos.

The main camera does a decent job in low light with the help of the dedicated Night mode. While you shouldn’t expect exceptionally brighter low-light photos, the long exposure mode manages to reduce noise and balances exposure to make photos look clearer. The main sensor with f/1.8 aperture lets in a good amount of light so you can capture indoor photos with a good amount of exposure. The camera uses AI to detect scenes like food flowers and automatically adjusts the saturation to make it look more appealing.

The 8MP wide-angle camera also delivers bright photos in daylight, but the images lack sharpness and clarity when zooming in. Similar, the 2MP macro lens should also be used in daylight conditions only. You can use the macro camera to capture subjects as close as 4cm. The macros we captured of flowers and food showed a noticeable shift in colour tone making the images look dull. We were able to capture more attractive natural bokeh shots at 10cm distance using the main camera.

As for the front camera, we were able to capture good-looking selfies with natural colour reproduction and detailing. Both the main rear camera and front camera support EIS, so you will be able to record videos with some amount of stability, but don’t expect the results to be great. Overall, the Realme 6 offers an attractive set of cameras, which offer good daylight photography and versatility for its pricing.

In real-world usage, using the Realme 6 on 90Hz refresh rate would require you to charge the phone once by the evening. On 60Hz, the phone would last a full day, allowing me to simply charge the phone in the morning while getting ready for work. This is where the 30W VOOC fast charging support really helps, as the phone can fully charge from zero to 100 percent in less than 60 minutes.

Realme hasn’t really left anything to chance while creating this smartphone. From its punch-hole display and 90Hz refresh rate to its power-packed performance and high-resolution cameras, the Realme 6 offers pretty much everything you need in a single package. The Realme 6 is a substantial upgrade over the Realme 5 Pro and it is indeed the new “Pro” in Realme’s number series.

We feel that the pricing of the Realme 6 is justified given what the smartphone offers. This is an easy recommendation under Rs 15,000 for anyone looking for a fast and smooth smartphone, especially mobile gaming enthusiasts. While the battery life may not impress you, the 30W fast charging makes up for it. The Realme 6 has set a new benchmark in this price segment, and it will be interesting to see if Xiaomi can offer a good reply with its upcoming Redmi Note 9 series. 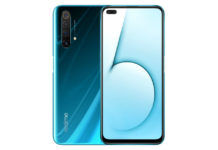 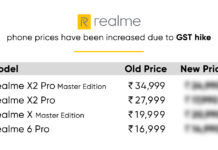 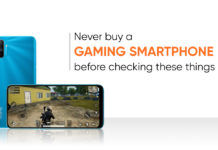 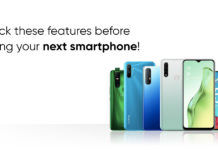 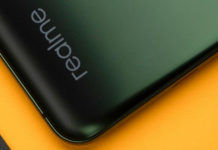 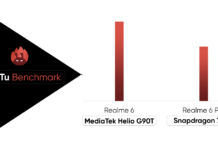 When it comes to performance, the Realme 6 is the real ‘Pro’. Here’s why 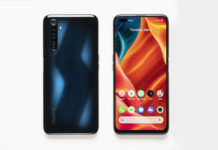 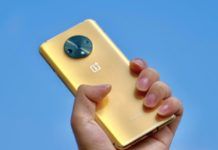 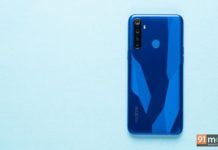