Home Comparisons Realme 6i vs Redmi Note 9: which one offers better value for...
Highlights 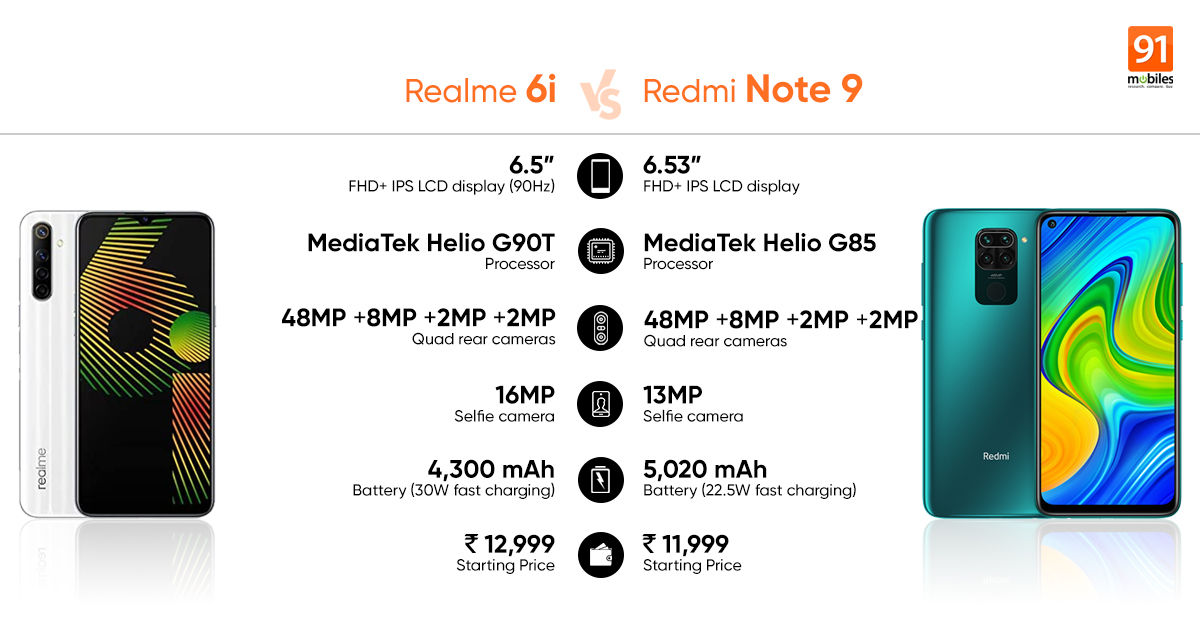 Realme 6i has been launched in India as an affordable version of Realme 6, which was introduced earlier this year. Thereby, it doesn’t come as a surprise that the Realme 6i shares most of its specifications with its sibling. The new handset touts the same design and specifications as the Realme 6, including a 90Hz refresh rate screen, chipset, battery, and fast charging tech. However, the phone has slightly downgraded cameras and a price tag starting at Rs 12,999 instead of Rs 14,999. The Realme 6i will be up against Xiaomi’s recently launched Redmi Note 9 smartphone. Here are a price and specs-based comparison of the two phones to help you decide which one offers better value for money.

Realme 6i vs Redmi Note 9: Price in India

The Realme 6i comes in just two variants: 4GB RAM + 64GB storage and 6GB RAM + 64GB storage, which have been priced at Rs 12,999 and Rs 14,999 respectively. The smartphone comes in Lunar White and Eclipse Black colours and will be on sale via Realme.com and Flipkart from July 31st onwards. 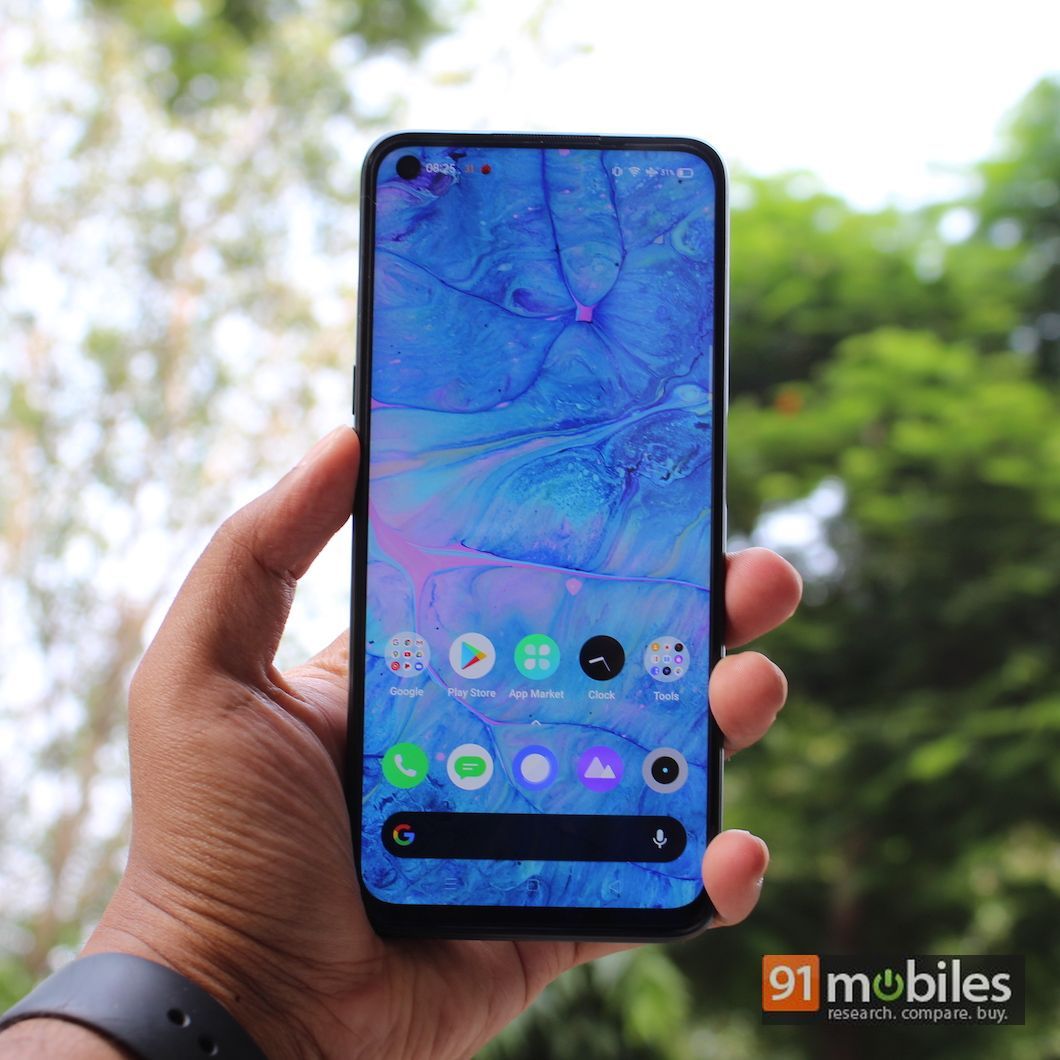 The Redmi Note 9 is slightly cheaper than Realme 6i, with its price starting from Rs 11,999. This is for the base 4GB RAM + 64GB storage variant, while the 4GB RAM + 128GB storage and 6GB RAM + 128GB storage option come with a sticker price of Rs 13,499 and Rs 14,999 respectively. The Redmi Note 9 is available in four colours, namely Scarlet Red, Aqua Green, Arctic White, and Pebble Grey. The phone is available for sale on Amazon.in and Xiaomi’s official e-store.

Realme 6i vs Redmi Note 9: Design and display

The Realme 6i and Redmi Note 9 both ship with a punch-hole display, with the cut-out at the top-left corner for the selfie camera. You can barely even tell them apart visually from the front side. Around the back, however, the Realme 6i has vertically-aligned quad camera setup, whereas the Redmi Note 9 features the quad cameras in a squarish module, with a fingerprint scanner just below. 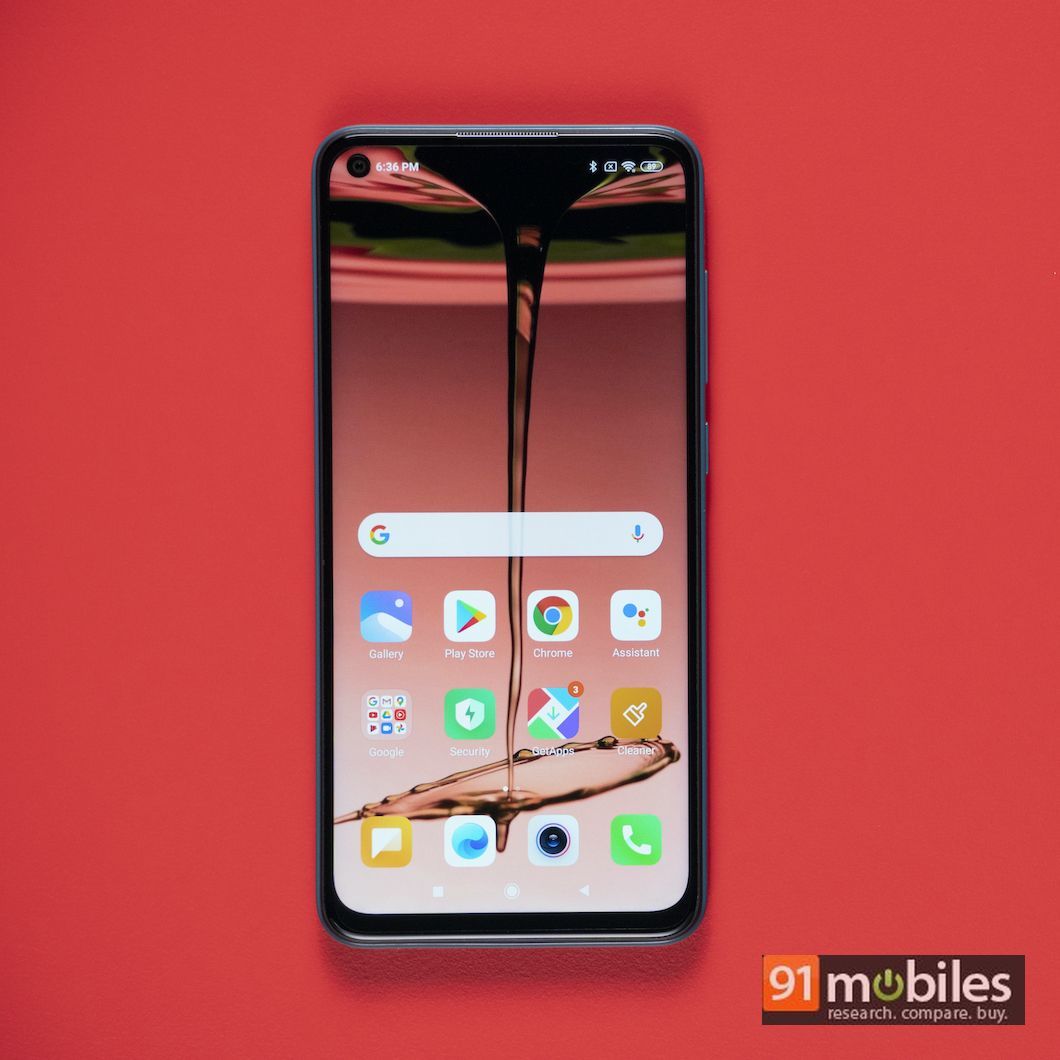 The Realme 6i has a side-mounted fingerprint scanner embedded underneath the power button on the right spine. Both phones have USB Type-C port for charging placed in-between the speaker grille and 3.5mm headphone jack at the bottom edge of the handset.

Realme 6i vs Redmi Note 9: Specifications

Coming to the specifications, the Realme 6i features 6.5-inch FHD+ display with 90Hz refresh rate, Corning Gorilla Glass, a screen-to-body ratio of 90.5 percent and 20:9 display aspect ratio. At the helm of the phone lies MediaTek Helio G90T chipset, which is the same chipset that rocks slightly expensive Realme 6, coupled with up to 6GB RAM and 64GB user-expandable storage onboard. Software-wise, the Realme 6i boots Android 10-based Realme UI out of the box. 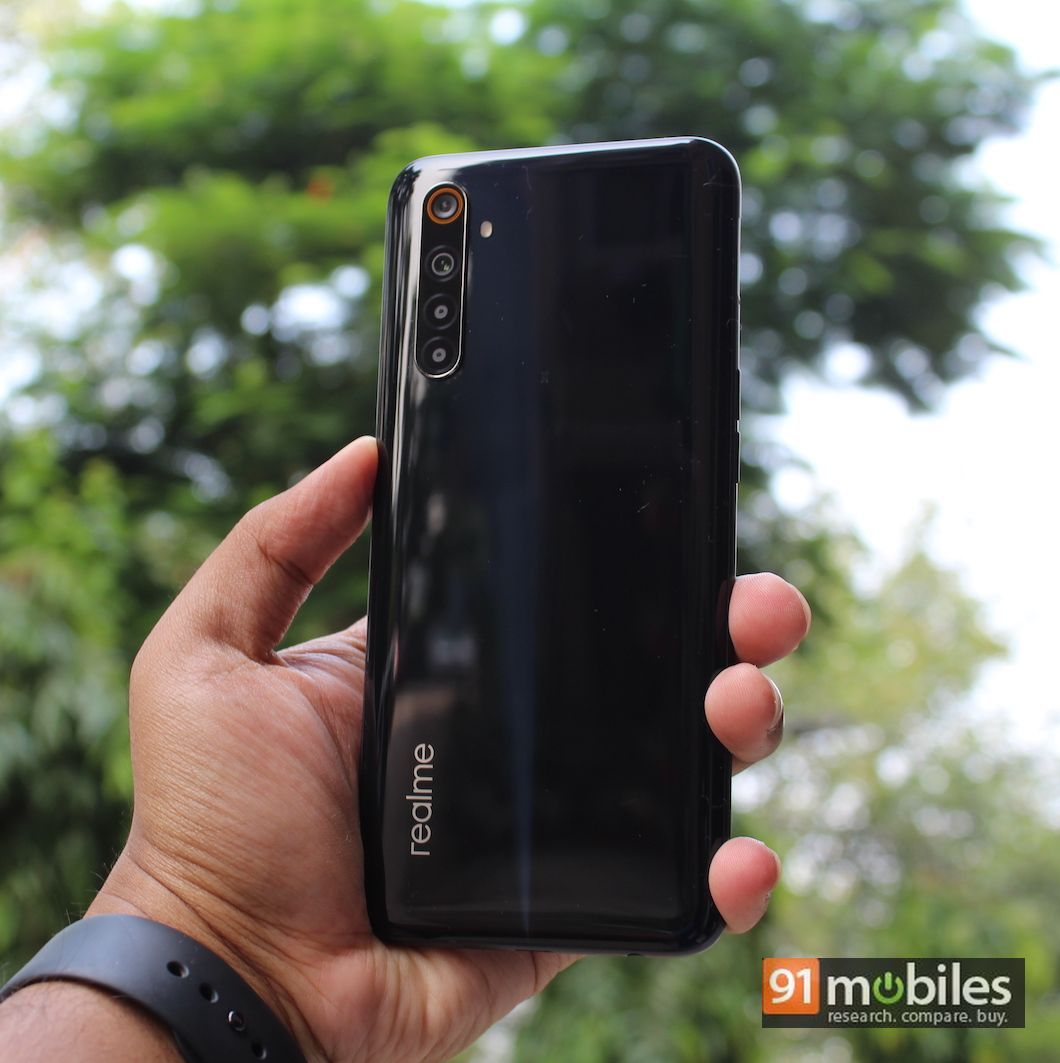 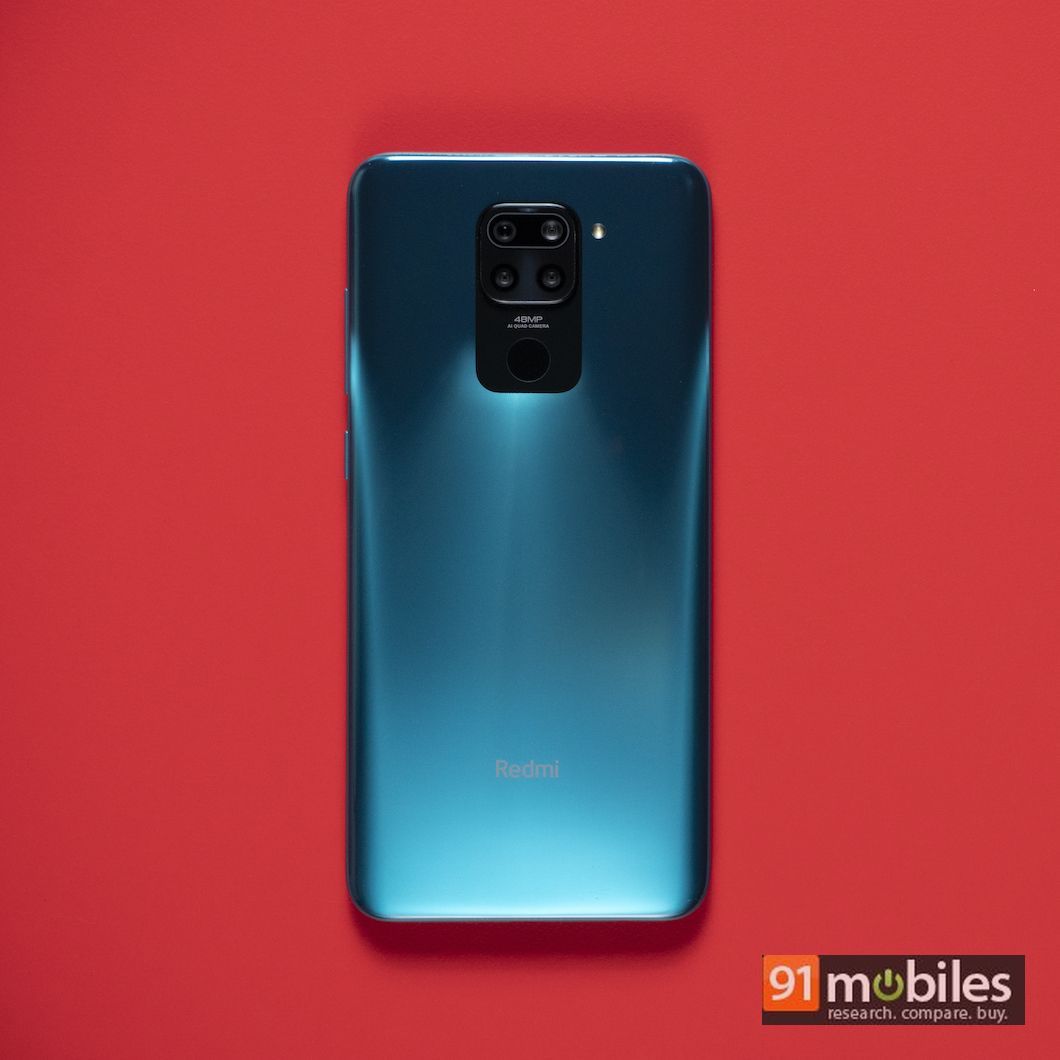 The Redmi Note 9, on the other hand, has similar specifications as its counterpart but with downgraded 60Hz refresh rate screen, 13MP selfie camera, MediaTek Helio G85 SoC, and 22.5W fast charging tech. The phone, however, has a 128GB storage variant as well and a slightly beefier 5,020mAh battery. Connectivity options on the Redmi Note 9, as well as Realme 6i, include 4G VoLTE, Wi-Fi, Bluetooth v5.0, GPS/ A-GPS, USB Type-C port, and a 3.5mm headphone jack. The Redmi phone also has an IR blaster and runs MIUI 11 atop Android 10 out of the box.

Realme 6i vs Redmi Note 9: Verdict

On paper, the Realme 6i appears to be a better choice among the two as the handset features a higher refresh rate display, an impressive mid-range gaming-focused chipset, 30W fast charging support, and front camera with 16MP resolution. However, it needs to be taken into account that the handset is Rs 1,000 expensive than the Redmi Note 9 and doesn’t come with beefy 5,020mAh battery, 128GB storage option, and IR blaster.