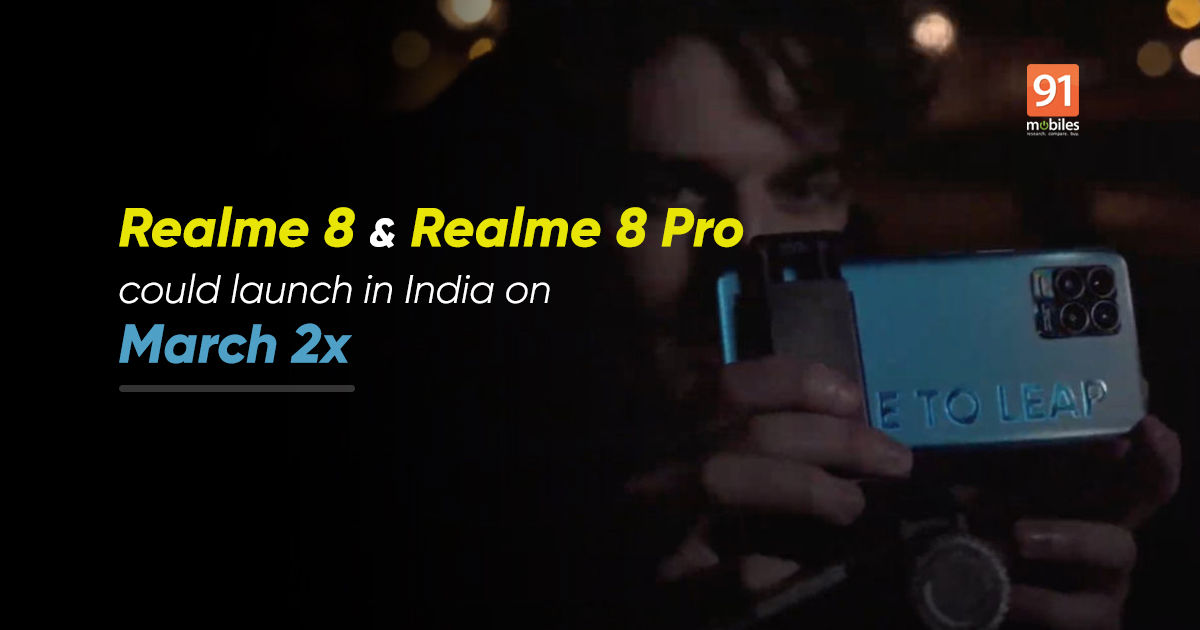 The alleged Realme 8 and Realme 8 Pro India launch date has been revealed by tipster Abhishek Yadav in a tweet. He claims that the new Realme mobile phones will launch in the country on March 25th, with the company said to be making the announcement in a week or so. The Realme 8 will be a 4G-only affair, but the Realme 8 Pro will be available to buyers in 4G and 5G variants, he further added. As teased by the company, the Realme 8 Pro specifications will be headlined by a 108MP primary camera. The phone is also expected to come with a beefy battery and 65W fast charging. The 5G chipset of the Pro model remains a mystery at the moment, but its 4G variant — as well as the vanilla Realme 8 — is rumoured to come with the Snapdragon 700-series SoC under the hood. Here’s a quick look at everything we know so far.

Starting with Realme 8 Pro 4G specifications, the device is expected to be powered by Snapdragon 730G chipset coupled with 6GB or 8GB RAM, and 128GB storage onboard. The smartphone will include a quad-camera setup stacked in a squarish module at the back. The camera setup will consist of the 108MP Samsung ISOCELL HM2 primary sensor, same as the one found on the Xiaomi Mi 10i and Redmi Note 10 Pro Max. The sensor will deliver 3x zoom and 4K video recording support at 120fps. Additionally, the cameras will be backed by the New Starry Mode along with support for timelapse video, tilt-shift, and portrait mode with three new filters, per the company.

The Realme 8 Pro is also expected to pack a 4,500mAh battery and support 65W fast charging. In addition to the Gradient Blue colour, the phone is also rumoured to come in Infinite Black and Illuminating Yellow colour options.

The Realme 8, on the other hand, is said to be available in Cyber Silver and Cyber Black colours. The phone is rumoured to rock Snapdragon 720G SoC under the hood paired with 4GB / 8GB RAM options and 128GB storage onboard. Details on the handset’s cameras, battery, and other specs haven’t been revealed yet.

There is no word on the Realme 8 and Realme 8 Pro prices in India at the moment.