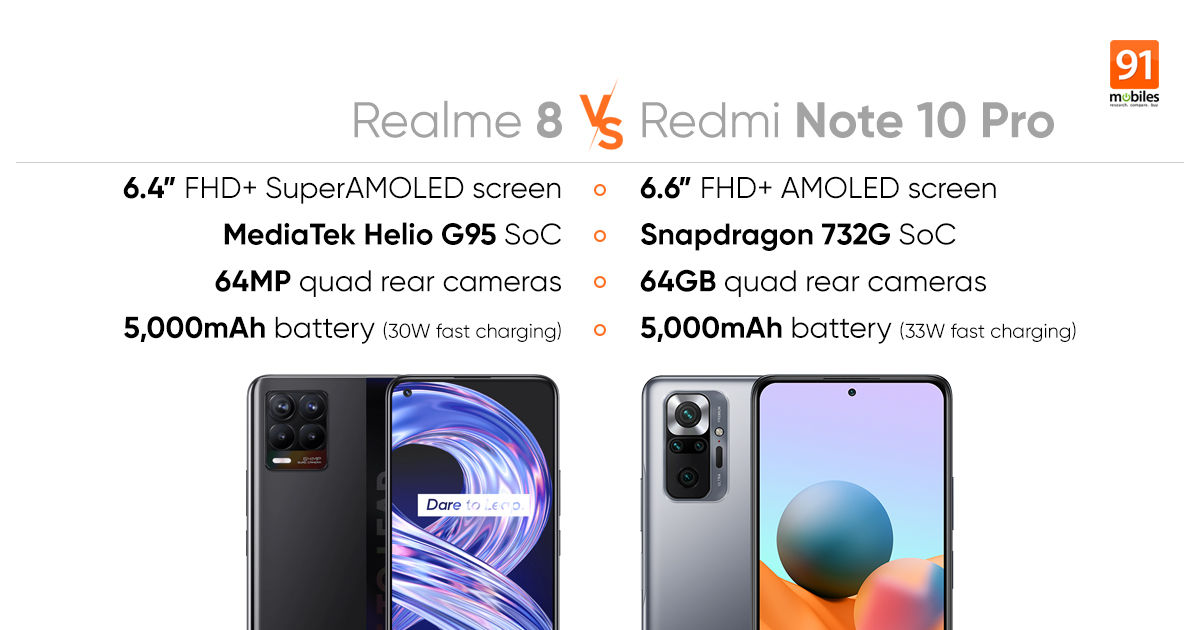 The Realme 8 India launch told us everything about the phone, including its price in India and specifications. It will compete with the likes of the Redmi Note 10 Pro, which was launched last month for a similar price. Realme and Xiaomi have been at loggerheads ever since the former’s entry into the Indian market as an affordable smartphone provider. Realme’s decision to recycle hardware between devices has worked out so far, but will the Realme 8 hold up against the Redmi Note 10 Pro? Let’s take a look at how the Realme 8 price in India, specifications, and features fare against those of Redmi Note 10 Pro in a head to head comparison.

Getting your hands on either device, however, will be a daunting task, because they’ll only be available via flash sales. It is quite common for a device to sell out within minutes, if not seconds of going on sale. Furthermore, there seems to be no sign of the Redmi Note 10 Pro base variant anywhere, with Xiaomi choosing to sell only the 6GB + 128GB version everywhere.

Although both phones come with nearly identical specifications, the Realme 8 loses out majorly due to its MediaTek Helio G95 chipset. While it is a competent piece of hardware in its own right, it falls flat against the Redmi Note 10 Pro’s Qualcomm Snapdragon 732G across the board, although not by a lot. This is due to the fact that the Snapdragon 732G two Kryo Gold cores’ slightly higher clock speeds (2.3GHz). In contrast, the Helio G95 uses two ARM Cortex-A76 cores clocked at 2.0GHz. However, the MediaTek Helio G95’s ‘efficiency Cortex-A55 cores are clocked higher, (2.0GHz vs 1.8GHz) so it could do better in some low-power tasks. Furthermore, the Snapdragon 732G’s Adreno 618 GPU is also faster than the Helio G95’s ARM Mali-G76 MC4. Qualcomm chipsets also come with some bonus features such as support for aptX and the likes.

The Redmi Note 10 Pro is the clear winner here because of its larger 6.7-inch AMOLED screen clocked at 120Hz. It is also HDR10 certified and has a peak brightness of 1,200 nits. While the Realme 8 also features a 6.4-inch AMOLED screen, its peak brightness is a tad lower at 1,000nits. Furthermore, its refresh rate is significantly lower at 60Hz. HDR10 support is absent, too.

The Redmi Note 10 Pro and Realme 8 come with a near-identical camera configuration. The former does, however, have a slightly better piece of hardware. Both phones have a primary 64MP sensor and 8MP ultra-wide-angle lens and 2MP depth sensor. The Redmi Note 10 Pro uses a 5MP macro lens instead of the 2MP sensor on the Realme 8. Lastly, both smartphones feature a 16MP selfie camera. It is hard to determine just which camera is better. It all boils down to the software optimisations provided by RealmeUI and MIUI 12.

Battery, software and other features

Both the Realme 8 and Redmi Note 10 Pro pack a 5,000mAh battery. However, the Redmi Note 10 Pro supports 33W fast charging, while the Realme 10 cuts that down to 30W. The extra 3W means little in real-world performance, though. Similarly, both phones run Android 11 out of the box, customised with the company’s in-house Android forks. Wireless connectivity features are identical across both phones too, such as dual-band Wi-Fi and Bluetooth 5.1 However, the Redmi Note 10 Pro does come with a handy (and often neglected) IR Blaster. One can use that with the Mi Remote app to control household appliances such as TVs and ACs.