Home Comparisons Realme 8s vs Realme 8i vs Motorola Edge 20 Fusion: benchmarks and... 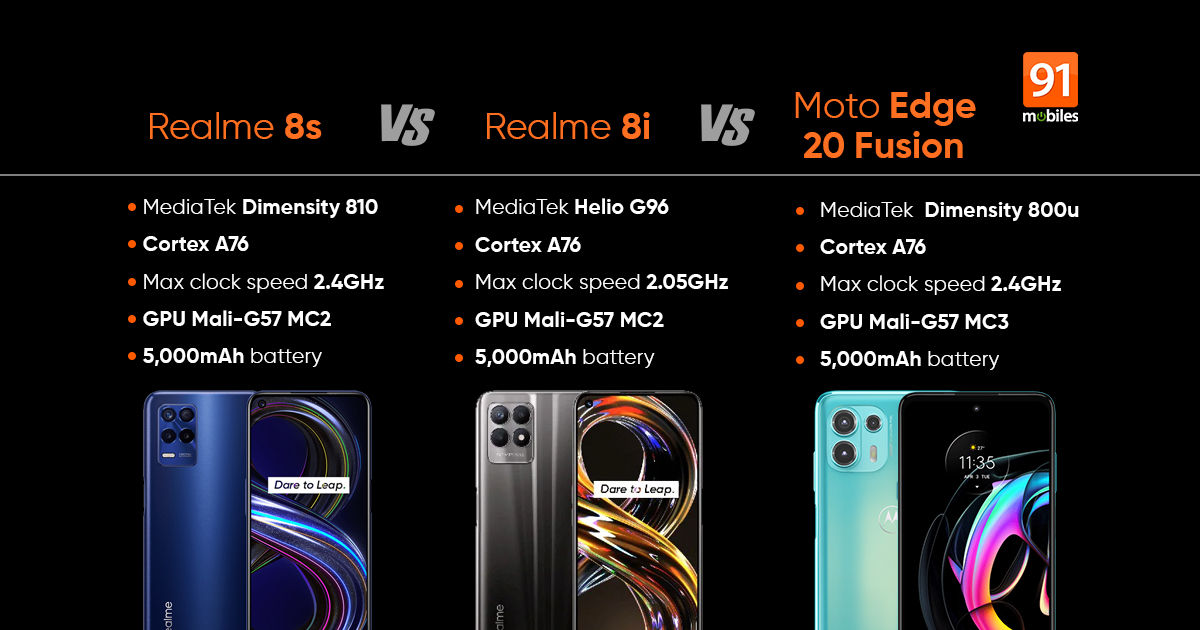 Realme has just announced two new phones as part of its signature number series and they come in the form of the Realme 8s and Realme 8i (review). Both devices have something different to offer in the Rs 15,000 – Rs 20,000 segment where they compete with smartphones from the Redmi Note 10 Pro series. The Realme 8s is the first phone to be announced with the 5G-capable MediaTek Dimensity 810 chipset while the Realme 8i runs on MediaTek’s Helio G96 chipset. Realme has been touting the performance capabilities of both the devices in their respective price brackets. I recently compared the performance of a few Mediatek Dimensity-powered smartphones to gauge the processing jump provided by different Dimensity chipsets as one moves up the tiers. So it’d be interesting to see how the new chipsets stack up. 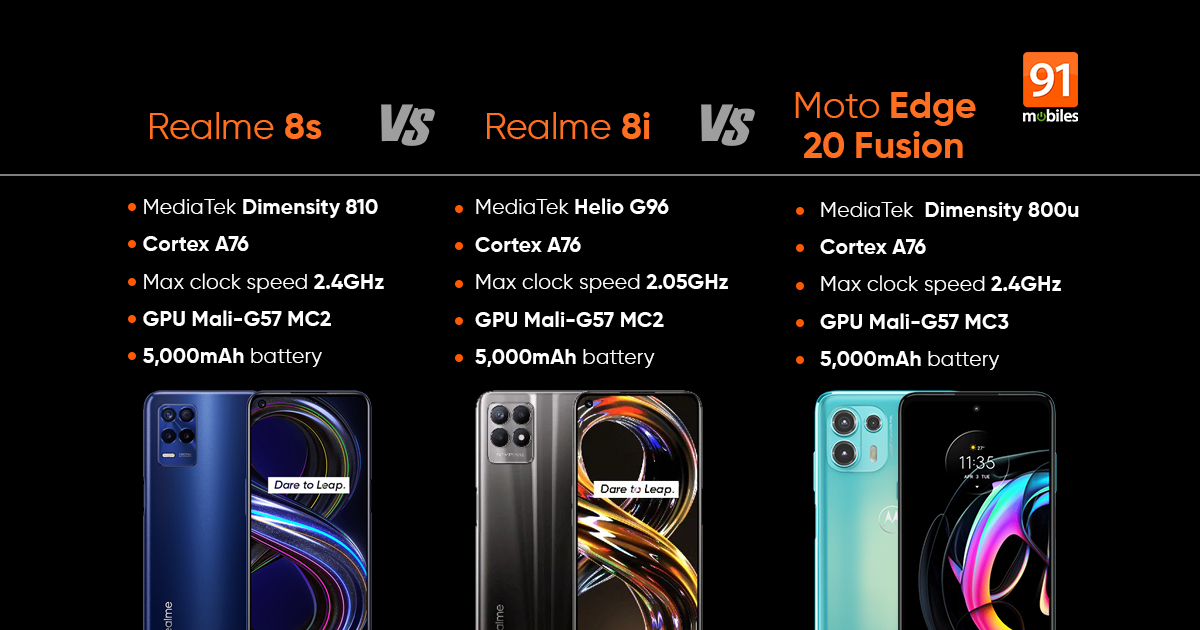 The Realme 8i starts at Rs 13,999 while the Realme 8s starts at Rs 17,999 which is nearly a difference of 25 percent in price. The question is whether this translates to an equivalent difference in performance between the 8s and 8i. Let’s find out in this comparison with the help of benchmarking data and a 30-minute test of BGMI. For the sake of diversity, I’ve also thrown in Moto Edge 20 Fusion which is powered by the Dimensity 800u SoC.

Geekbench 5 provides single-core and multi-core performance scores for the device CPUs. The Helio G96 powering the Realme 8i has dual-core Cortex A76 CPUs with 2.05GHz clock speed, while its efficiency cores are the usual six Cortex A55s clocked at 2GHz. It gets single-core and multi-core scores of 527 and 1,658 in Geekbench. On to the Realme 8s which houses the new Dimensity 810 chipset. This SoC has four Cortex A76 performance cores clocked at 2.4GHz along with four efficiency cores that have a frequency of 2GHz. It scored 608 and 1,821 in Geekbench. For the Moto Edge 20 Fusion running on Dimensity 800U, which has the same configuration of cores as the 810, the scores were 586 and 1,732. One thing to also note here is that the Dimensity 810 and 810u have been made using much more power-efficient 6nm and 7nm manufacturing processes respectively, while the Helio G96 is nearly double at 12nm. The true implications of this will be clearer in terms of battery usage and heating of the three devices under sustained loads. As such the Geekbench 5 score of the Realme 8s is higher than the 8i but only by about 14 percent in single-core usage and about 10 percent in multi-core usage. The Moto Edge 20 Fusion lies in between the two but is closer in performance to the 8s than 8i.

To get an overall metric of various aspects of a smartphone’s performance, Antutu is a very useful tool. Apart from the CPU usage, the benchmark also makes note of the GPU, memory, and the user interface. As such, the Realme 8s gets a very decent overall score of 380,233 while the Realme 8i logged 339,581. The Moto Edge 20 Fusion’s score of 370,121 again lies much closer to the Realme 8s than the 8i. In terms of gains, the 8s was ahead of the 8i by a margin of 10 percent while the Edge 20 Fusion’s gains were about 9 percent. Interestingly, the GPU score on the Edge 20 Fusion is the highest, but it falters slightly on the UX and CPU scores as compared to the Realme 8s. The overall gain in temperature while conducting the test is indicative of the 8i’s lower power efficiency. The 8s gained just about 1 degree during the benchmark’s run while the Edge 20 Fusion actually dropped nearly 2 degrees. In comparison, the Realme 8i gained about 8 degrees even though the benchmark on the device had started at about three degrees below the 8s’ initial temperature.

With a focus on the GPU, 3DMark’s Wild Life benchmark gives a score based on the phone’s graphical capabilities. As far as the GPU is concerned, the Dimensity 810 uses the Mali-G57 MC2 which is the same as the Helio G96 while the Dimensity 800u utilises the Mali-G57 MC3. The Realme 8i understandably comes last at 1,093 and the Moto Edge 20 Fusion proves its GPU capabilities again with the highest score amongst the three devices at 1,602. The Realme 8s score of 1,234 happens to be much closer to the Realme 8i than to the Moto Edge 20 Fusion since the 8s and 8i have the same GPU. In terms of percentage, the Realme 8s has about 23 percent lower GPU performance as compared to the Edge 20 Fusion and about 12 percent higher than the Realme 8i.

Running Battlegrounds Mobile India is a strenuous task in itself as the game demands a lot of resources from the phone. Running the game for 30 minutes should give an idea of how good the smartphone is in terms of battery dropped and temperature gained. Since all phones have an equal 5,000mAh battery capacity, the test will be on an even footing. Firstly, all three phones can run the game at Ultra Frame Rate settings with graphics set at Balanced which provides up to 45fps. The Realme 8s delivered a smooth frame rate throughout the game and managed to keep the temperature gain to 7 degrees, while the battery dropped was 6 percent. In comparison, the Moto Edge 20 Fusion ran cool at just about 4 degrees of temp gained and the battery dropped by about 5 percent. Lastly, the Realme 8i ran slightly hotter with an 8 degree gain in temperature while the battery dropped by 8 percent. All the phones delivered constant frame rates, managing 45fps easily even through the expansive rendering of BGMI’s Miramar terrain. The Realme 8i showed a few dropped frames but overall the experience on all three phones in terms of gameplay was very similar.

From this comparison, it is clear that the performance gains on the Realme 8s are slight as compared to the difference in price between the two devices. Also, the Moto Edge 20 Fusion, priced at Rs 21,499, offers more-or-less the same amount of processing prowess, but moves ahead in terms of graphical capabilities. Of course, there are so many more metrics to judge a smartphone but if you are to go purely on the basis of performance, the gap between the Realme 8i and 8s is not much. Even so, the overall power efficiency of the latter does make a notable difference in battery life which should also be put into consideration.