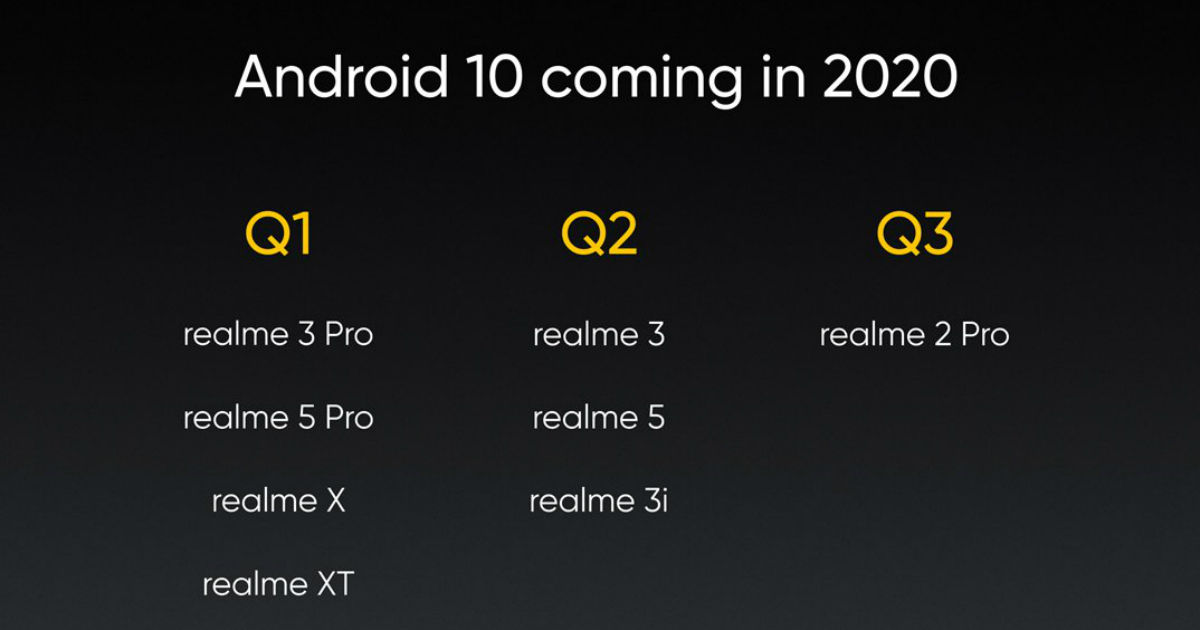 At the Realme XT India launch event, the company has announced the Android 10 upgrade schedule for its smartphones. The Realme XT, 5 Pro, X, and 3 Pro will be the first to receive the Android 10 update, the schedule reveals. These Realme smartphones are scheduled to receive the update in the first quarter of 2020. Those who have the Realme 5, 3, and 3i smartphones will have to wait for the second quarter of the year to get a taste of the new version of Android. Lastly, in Q3 2020 (when Android 11 will be hitting the market), only Realme 2 Pro will get upgraded to Android 10. We can expect the Realme XT 730G to launch with Android 10-based custom UI onboard when it launches in December.

This schedule leaves out a bunch of low-end Realme phones with just Android Pie. These include Realme 1, 2, C1, and C2 as well as the selfie smartphone Realme U1.

The brand currently uses the ColorOS Android-based custom skin on all its phones. However, we can hope to see the long-awaited RealmeOS, based on Android 10, in the flesh finally when the brand announces the Realme XT 730G. It was in the rumour mill as early as January this year but was confirmed only in August. The company is already testing it with a small set of users. The RealmeOS will be released for all of the brand’s devices, but it is not necessary all the builds are based on Android 10. Therefore, the Realme 1, 2, C1, C2, and U1 may get an Android Pie-based RealmeOS instead. We will have to wait it out till December at least to figure out if it is indeed rolling out sooner rather than later.