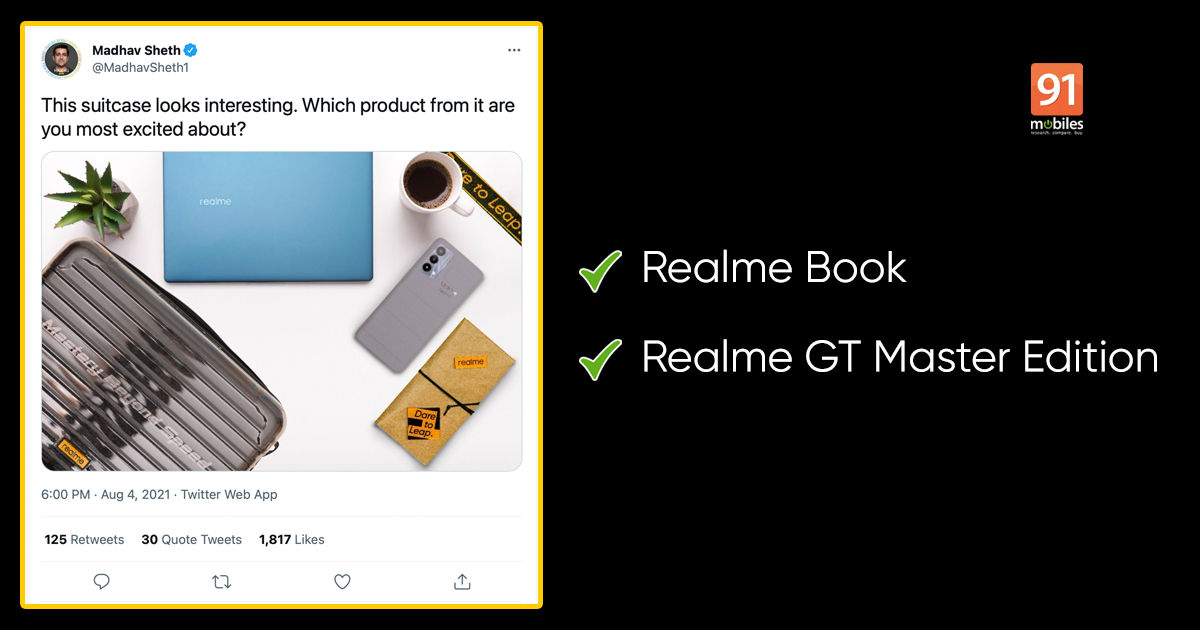 Realme GT and GT Master Edition series phones are scheduled to launch in India on August 18th, as confirmed by the company’s India head Madhav Sheth this week. The executive has assured the phones will have specifications similar to the global variants and that the Realme GT leather edition will also find its way to the Indian market. When asked about Realme Book — the Realme laptop, Sheth said it is a new product category for the company and that they’re eager to see how Indian users would receive it. Sadly, the exact launch timeline was not revealed during the Q&A video. However, that changes now as Realme Book has been teased to launch in India alongside the Realme GT on August 18th.

This suitcase looks interesting. Which product from it are you most excited about? pic.twitter.com/pKC1FcYb6Q

The teaser image posted on Twitter showcases the Realme GT Master Edition alongside the Realme Book laptop in the Blue colour option. The tweet reads “This suitcase looks interesting. Which product from it are you most excited about?” While the Realme chief hasn’t explicitly mentioned the Realme laptop will launch on the same stage, the teaser comes as plenty of evidence to suggest the same. In addition to the Blue colour, there might be a Grey option at launch. The recent teaser image shows the laptop could have a 180-degree hinge.

According to leaked specifications, the Realme Book is said to sport a 14-inch LCD FHD display and is expected to be powered by the latest 11th generation Intel Core processors, and is likely to be upgraded to Windows 11 OS when it’s made available. The Realme Book is said to be priced around the Rs 40,000 mark for the base variant. It should be interesting to see how Realme intends to take on the RedmiBook laptops that were launched in the country earlier this week.