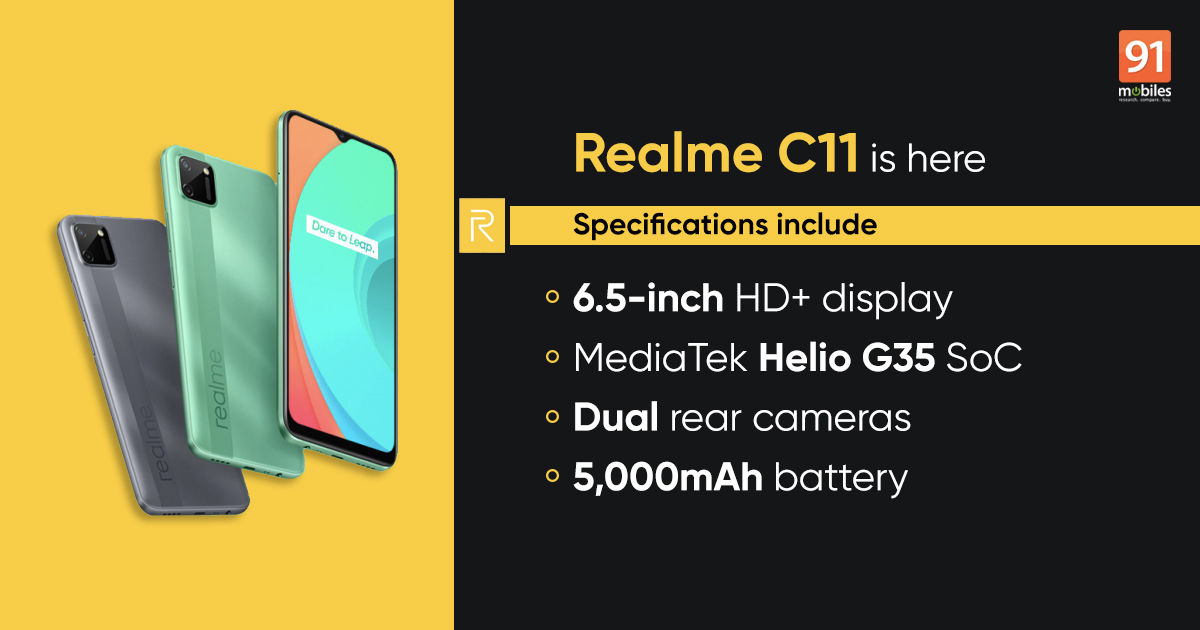 Realme C11 has been launched in India as the company’s newest entry-level smartphone. The device comes as a successor to Realme C3 from earlier this year and features dual-rear cameras, waterdrop notch display, and an all-new geometric design. The all-new Realme C-series phone touts a square-shaped camera module that includes dual cameras. Other key Realme C11 specifications include the 5,000mAh battery, MediaTek Helio G35 chipset and Nightscape mode for the primary camera. Here’s a quick look at the Realme C11 price in India, sale date and specifications.

Realme C11 price in India is set at Rs 7,499 for the sole variant with 2GB RAM and 32GB storage variant. The handset comes in Mint Green and Pepper Grey colour options and will see its first sale on July 22nd on Flipkart and Realme.com.

Coming to the Realme C11 specifications, the entry-level phone runs on Android 10-based Realme UI out of the box. It sports a 6.5-inch Mini-drop notch display with an HD+ (1600×720) resolution. This is India’s first phone powered by the gaming-focused 2.3GHz MediaTek Helio G35 chipset, which comes with the HyperEngine technology and is equipped with the IMG PowerVR GE8320 GPU. The Realme C11 come with 2GB RAM and 32GB internal storage that is further expandable up to 256GB using a dedicated microSD card slot.

Coming to the Realme C11’s cameras, you get a dual camera setup on the back headlined by 13MP primary sensor and 2MP depth sensor. Up front, the phone gets a 5MP sensor on the front for selfies and video calling. The Realme C11 houses a 5,000mAh battery with standard charging support fuels the handset. Connectivity options include 4G LTE, Dual SIM support, Wi-Fi, Bluetooth, GPS, 3.5mm headphone jack, and microUSB port. There is no fingerprint scanner for security, but you do get face unlock.