91mobiles.com
Home Comparisons Realme C11 vs Narzo 10A: which Realme phone should you buy under...
Highlights 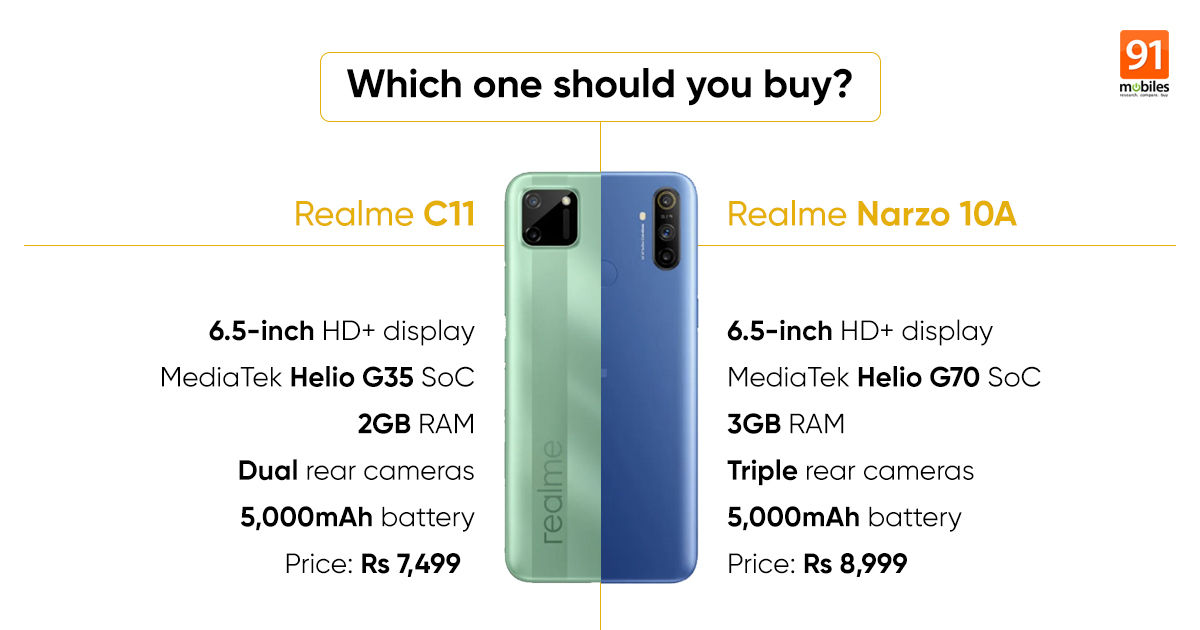 Realme C11 (review) was launched in India on Tuesday as an entry-level smartphone and successor to the Realme C3. The newest entrant to the Realme C series brings a fresh new design language and a brand new MediaTek G series chipset. The Realme C11 falls in the sub-Rs 10,000 segment, which means it will be going up against other budget smartphones, some of which come from Realme itself. Today. we’re looking at how the Realme C11 compares to the Realme Narzo 10A (review) in terms of pricing, specifications, and features to help you understand which phone is a better buy.

Realme C11 vs Narzo 10A: price in India and sale date

Realme C11 price in India has been set at Rs 7,499 and it comes in a single variant with 2GB RAM and 32GB internal storage. The smartphone is available in Mint Green and Pepper Grey colours and will go on sale in India for the first time on July 22nd on Flipkart and Realme.com. The Realme Narzo 10A price in India starts at Rs 8,999 for the variant with 3GB RAM and 32GB storage. The 4GB + 64GB variant is priced at Rs 9,999. The next Narzo 10A sale date has not been revealed yet. The phone comes in So Blue and So White colours.

Realme C11 and Narzo 10A both offer unique designs in the budget segment. The former brings a geometric design that sees a square-shaped camera module at the back and a textured rear panel. On the other hand, the Narzo 10A brings a smooth matt finish with a large and bold Realme branding across the rear panel. If you’re looking for a fresh design language in the sub-Rs 10,000 segment, we feel the Realme C11 will be the way to go.

That being said, an important feature to note is that the Realme Narzo 10A gets a rear-mounted fingerprint sensor whereas the Realme C11 does not and can only be unlocked through face unlock.

Realme C11 vs Narzo 10A: specifications

While the Narzo 10A gets a triple camera setup as opposed to a dual camera setup on the Realme C11, it does not come with a dedicated night mode. The Realme C11 does come with a Night mode feature, which makes it stand out in this segment. The Narzo 10A gets a 12MP main camera, 2MP portrait lens and a 2MP macro lens. The Realme C11 gets a 13MP main and 2MP portrait lens. If you’re a fan of macro photography, the Narzo 10A is your best bet, but if you’re looking for a budget phone with a dedicated night mode for slightly better low light shots, the Realme C11 is worth looking at.

Other features are more or less similar on the two phones. Both the Realme C11 and Realme Narzo 10A get a similar 6.5-inch HD+ LCD display, 5,000mAh battery capacity, and 10W charging speed. This means you’re likely to get a similar display experience and battery performance out of both the smartphones. We managed to get a day and a half of battery life on a single charge on both the phones.

Realme C11 vs Narzo 10A: which one should you buy?

The Realme C11 is a good-looking budget smartphone, but we feel that may not be enough for buyers spending Rs 7,499 on a phone. The smartphone lacks a fingerprint sensor and offers only 2GB of RAM. The Helio G35 chipset is also underwhelming and will not be able to run games smoothly.

By spending Rs 1,500 more, you can get the Realme Narzo 10A, which arguably gets you more bang for the buck. It offers a fingerprint sensor, 3GB of RAM to start with, a faster MediaTek Helio G70 chipset and more cameras. The choice between the two looks pretty simple when you consider these factors.