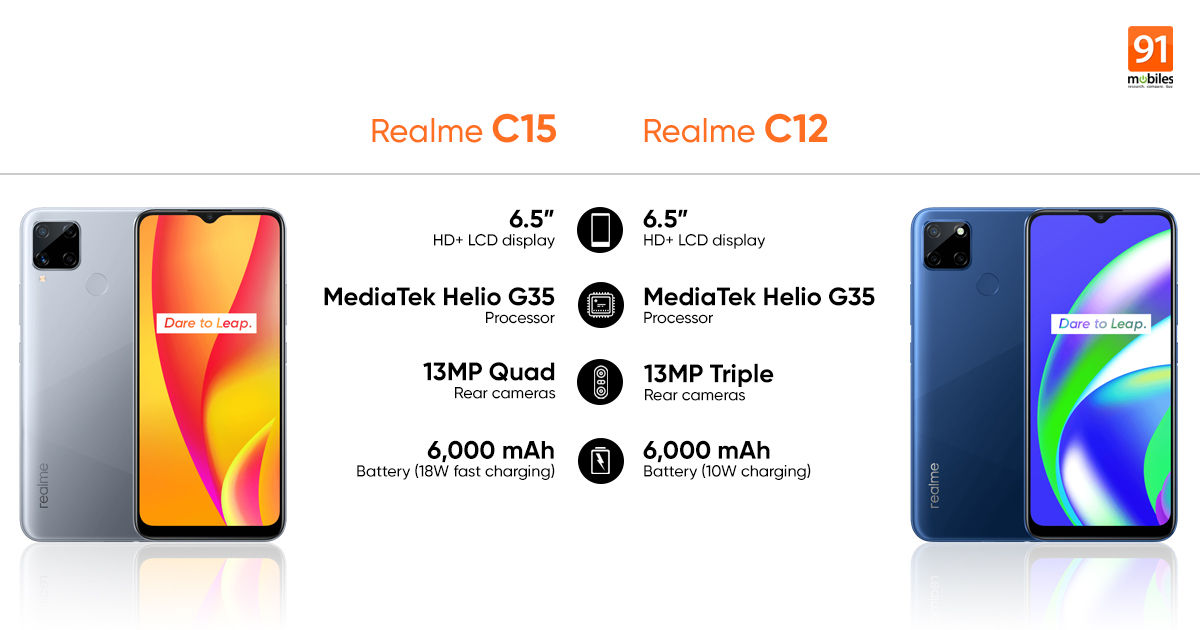 Realme C12 and Realme C15 have been launched in India as the newest entry-level smartphones from the brand. The new Realme C-series phones join the Realme C11 (Review) under Rs 10,000. Both the phones share similar specifications and designs, including a waterdrop display, a square-shaped rear camera module, and a rear-mounted fingerprint sensor. The Realme C12 and C15 come with the MediaTek Helio G35 SoC, a massive 6,000mAh battery, and up to 18W fast-charging support. Additionally, Realme Buds Classic wired earbuds have also been launched in India.

Realme C15 flaunts a 6.5-inch HD+ LCD display with a waterdrop notch to accommodate the selfie snapper. Powering the handset is the MediaTek Helio G35 SoC coupled with up to 4GB RAM and 64GB expandable storage. The phone runs on Android 10 OS with Realme UI and features a rear-mounted fingerprint sensor for security. The Realme C15’s quad-camera setup at the back includes a 13MP primary sensor, an 8MP 119-degree ultra-wide-angle sensor, a black and white sensor, and a retro sensor. For selfies, there is an 8MP snapper for selfies and video calling. Connectivity options include Dual 4G VoLTE, Wi-Fi, Bluetooth v5.0, GPS/GLONASS/Beidou, MicroUSB, and 3.5mm Audio jack. The phone is equipped with a 6,000mAh battery and supports 18W fast-charging.

The Realme C12 gets the same 6.5-inch HD+ display with a waterdrop notch and is powered by the same Helio G35SoC coupled with 3GB RAM and 32GB storage that is expandable via microSD card. It runs Android 10 OS with a Realme UI custom layer on top. As for the cameras, the Realme C12 has a triple camera setup that includes a 13MP primary sensor, a retro camera, and a B&W lens. They have support for Super Nightscape, Chroma Boost, Slow-mo video recording, and 1080p video recording. There is a 5MP selfie snapper on the front and a rear-mounted fingerprint sensor for security. The Realme C12 packs a 6,000mAh battery with 10W charging and is splash-resistant. Connectivity features include 4G LTE, Wi-Fi, Bluetooth, and GPS.