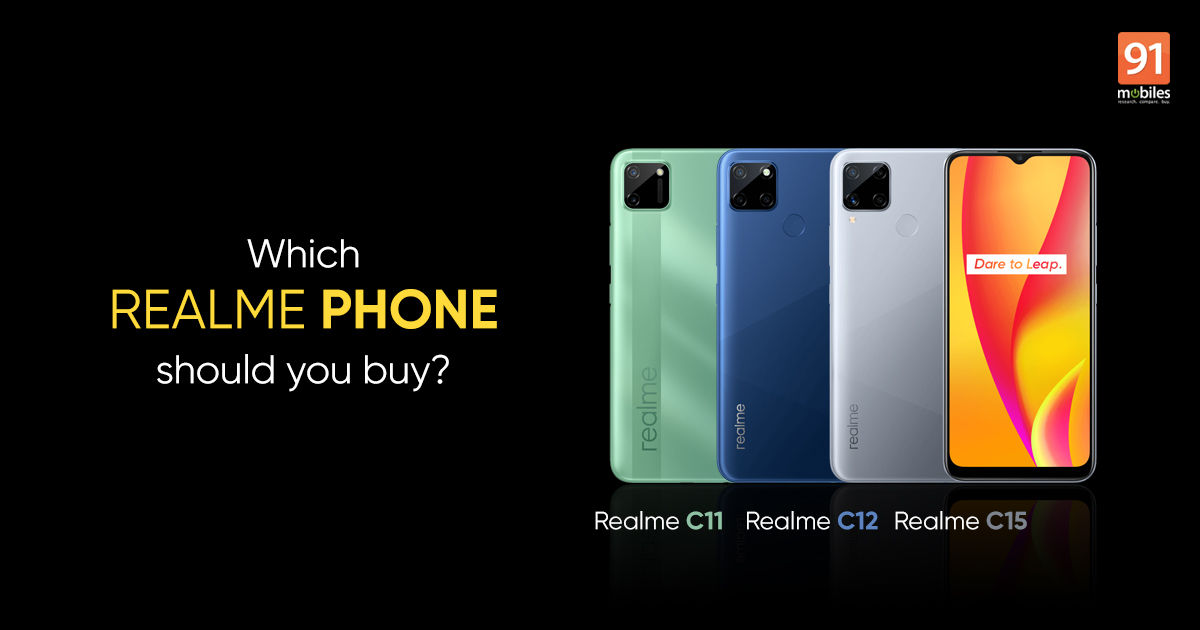 Realme has refreshed its budget C series with the launch of the Realme C11, Realme C12, and Realme C15 smartphones in India. The Realme C11 arrived last month while the Realme C12 and C15 made their debut in the country on Tuesday. All three models are affordable phones priced under Rs 10,000. The phones share a lot of the same design elements and specifications, which can make it slightly difficult to tell them apart. In this article, we break down what each of the new Realme C-series smartphones offer, so you can decide which one you should buy.

Realme C11 (Review) went official in India last month with a price tag of Rs 7,499. The model comes with 2GB RAM and 32GB internal storage and is available in Rich Green and Rich Grey colours. The Realme C11 sports a 6.5-inch Mini-drop HD+ (1600×720) display at the front and a Geometric Art design at the back. The rear panel gets a matt finish and a square-shaped camera module that houses a 13MP dual camera setup.

The Realme C11 does not come with a fingerprint sensor and only offers facial recognition. The phone is powered by the 2.3GHz MediaTek Helio G35 chipset paired with 2GB RAM. It packs a 5,000mAh battery and supports standard 10W fast charging over micro-USB port.

The Realme C12 (Review) price in India is set at Rs 8,999 for the model with 3GB RAM and 32GB internal storage. The smartphone also sports a 6.5-inch HD+ waterdrop display and is powered by the MediaTek Helio G35 SoC much like the Realme C11. One of the main differences between the two phones is that the Realme C12 features a rear-mounted fingerprint sensor.

Another USP of the phone is that it packs a 6,000mAh battery. However, the phone supports a standard 10W charging speed. The Realme C12 gets a 13MP triple camera setup that includes a macro lens and a B&W lens.

The USP of the Realme C15 is that it comes with a quad-camera setup, which is a first for a Realme C-series phone. The camera system includes a 13MP primary sensor, an 8MP ultra wide-angle sensor, a black and white sensor, and a retro sensor.

Which Realme C-series phone should you buy?

If you’re on a very tight budget, then the Realme C11 should offer you more or less the same performance as the Realme C12 as they are both powered by the MediaTek Helio G35 SoC. The Realme C12 has the advantage of offering a fingerprint sensor and bigger battery, which you can consider over the Realme C11 if these two features are important for you. We are yet to review the Realme C15, so we will reserve our opinions about the phone for a later date.