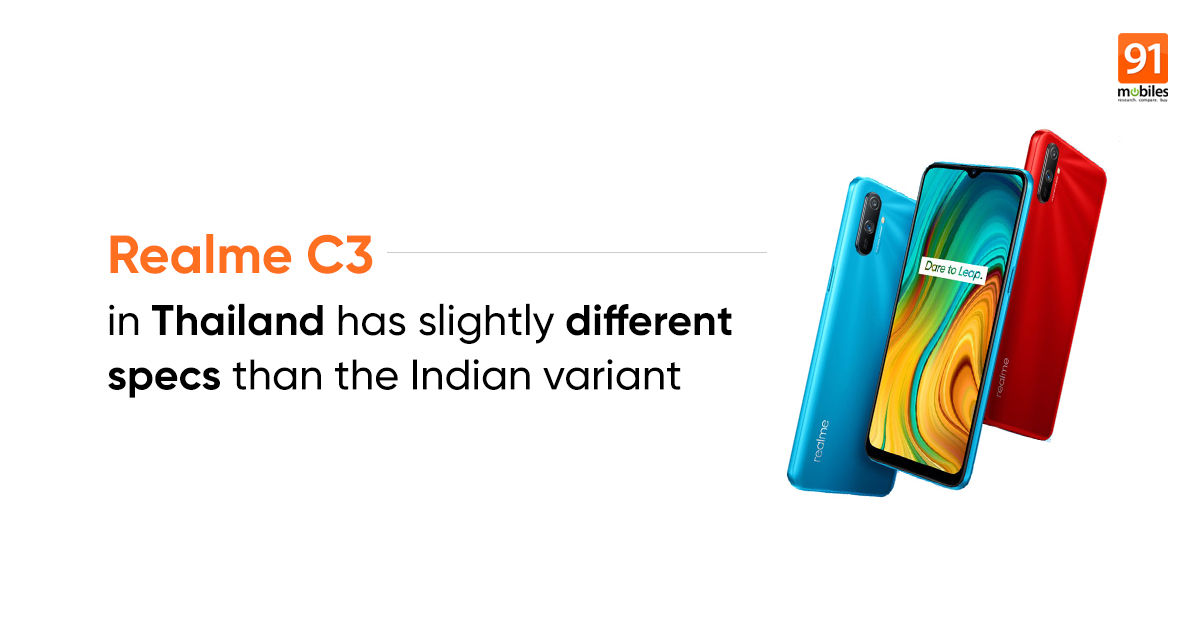 Realme C3 (review), which was launched in India earlier this month, has now been launched in Thailand. The model that has been launched in Thailand is slightly different to one launched in India, mainly in the camera and security department. To recall, the Realme C3 Indian variant features dual cameras, but the version in Thailand offers triple cameras. The phone comes with an additional 2MP macro lens, which is lacking in the Indian variant. Apart from that, the Realme C3 also ships with a rear-mounted fingerprint scanner. The rest of the Realme C3 specifications remain the same. It’s powered by MediaTek Helio G70 chipset and sport a 6.5 inch IPS LCD display with waterdrop notch atop. The Realme C3 is also equipped with a beefy battery cell and runs the latest Android 10-based Realme UI out of the box.

The Realme C3 price in Thailand is set at BAHT 3,999 (~Rs 9,000) for the base 3GB RAM and 32GB storage variant. This is slightly higher than its Indian counterpart. The Realme C3 with the same configuration in India has been priced at Rs 6,999, while the top-end 4GB RAM and 64GB storage option costs Rs 7,999.

The Realme C3 4GB RAM variant price in Thailand is currently unknown. The handset comes in two colour options: Frozen Blue and Blazing Red, with a new sunrise design on the back.

Coming to the specifications, the Realme C3 sports a 6.5-inch HD+ Mini drop display, 89.8 percent screen-to-body ratio, 20:9 aspect ratio, and Gorilla Glass 3 protection. The phone has 2Ghz MediaTek Helio G70 chipset paired with up to 4GB RAM and 64GB expandable storage under the hood. The handset is driven by a 5,000mAh battery with reverse charging support, while Realme UI with Android 10 takes care of its software side of things.