91mobiles.com
Home Comparisons Realme C3 vs Redmi 8A: which smartphone should you consider?
Highlights 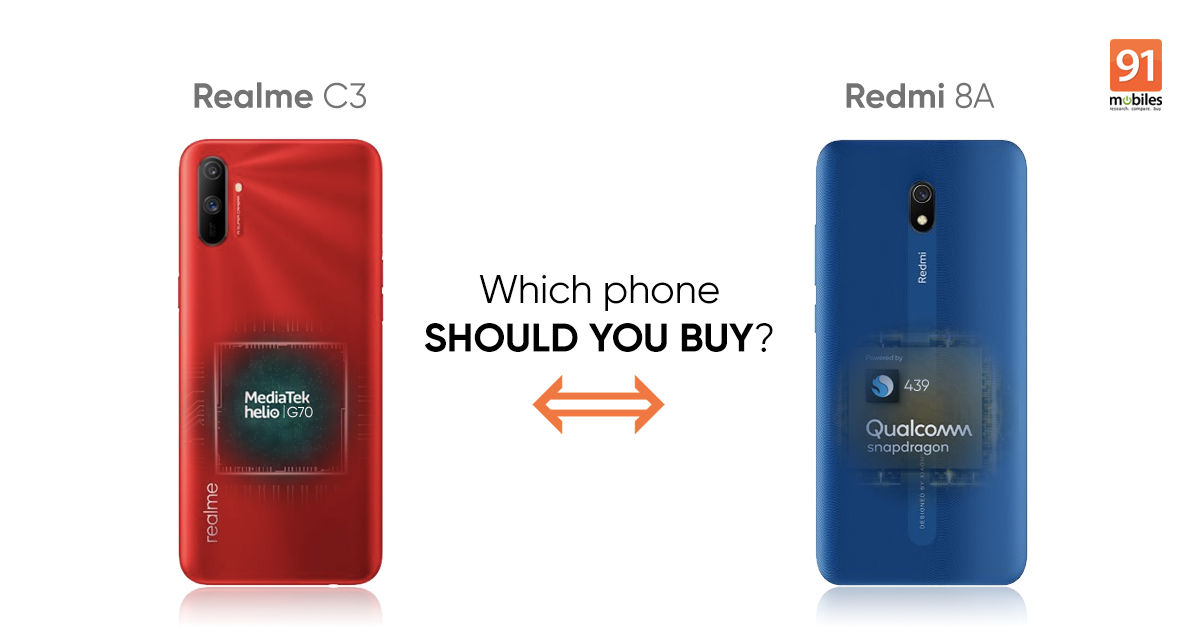 Budget smartphones in today’s world no longer involve compromise. With features like tall displays, minimal bezels, multiple cameras, and even Artificial Intelligence (AI) being offered as part of the package these days, even smartphones priced below Rs 10,000 are quite capable. On this note, we have with us two such devices — the Realme C3 and the Redmi 8A, which are packed fairly similarly in terms of features and specifications. While the Redmi 8A is powered by Qualcomm’s Snapdragon 439 SoC, the Realme C3 goes all out in the budget segment by using a gaming SoC — the MediaTek Helio G70. Here’s a look at a few key comparison points between the two smartphones, which should help understand which of the two should you be considering.

Straight off the bat, the Realme C3 has a clear performance advantage over the Redmi 8A. The Realme C3’s G70 chipset has two Cortex-A75 high performance cores clocked at 2GHz, and six Cortex-A55 cores clocked at 1.7GHz. In comparison, the Redmi 8A is powered by the Qualcomm Snapdragon 439 SoC, which comes with four Cortex-A53 cores clocked at 1.95GHz, and four more A53 cores running at 1.45GHz. This makes the MediaTek-powered Realme C3 a significantly better performer in terms of pure number crunching. Furthermore, the Realme C3’s G70 chipset includes the Mali G52 GPU for handling graphics, which is a better performer than Qualcomm’s Adreno 505 GPU that comes along with the Snapdragon 439 SoC.

The MediaTek Helio G70 chipset powering the smartphone features HyperEngine Game tech, which acts as a game booster of sorts – it automatically switches the device to a seamless low latency network mode to keep online games running smoothly. Moreover, the HyperEngine tech offers great power efficiency and resource management algorithms to extend the battery life, ensuring you can enjoy long gaming sessions without looking for a charger. On the other hand, the Redmi 8A doesn’t offer a dedicated gaming mode or any such tech to make the experience better.

Like other metrics, this too is a clear victory for the MediaTek-powered Realme C3. While the Redmi 8A comes with only a single, 12-megapixel rear camera, the Realme C3 features two rear cameras, including a 2-megapixel depth assistance unit. This is made possible thanks to MediaTek’s Helio ISP, which supports dual cameras even in this segment, and also supports high frame rate video recording of up to 240fps. With such clear abilities and a clear difference in the cameras in use, the Realme C3 is the very evident winner of this contest. 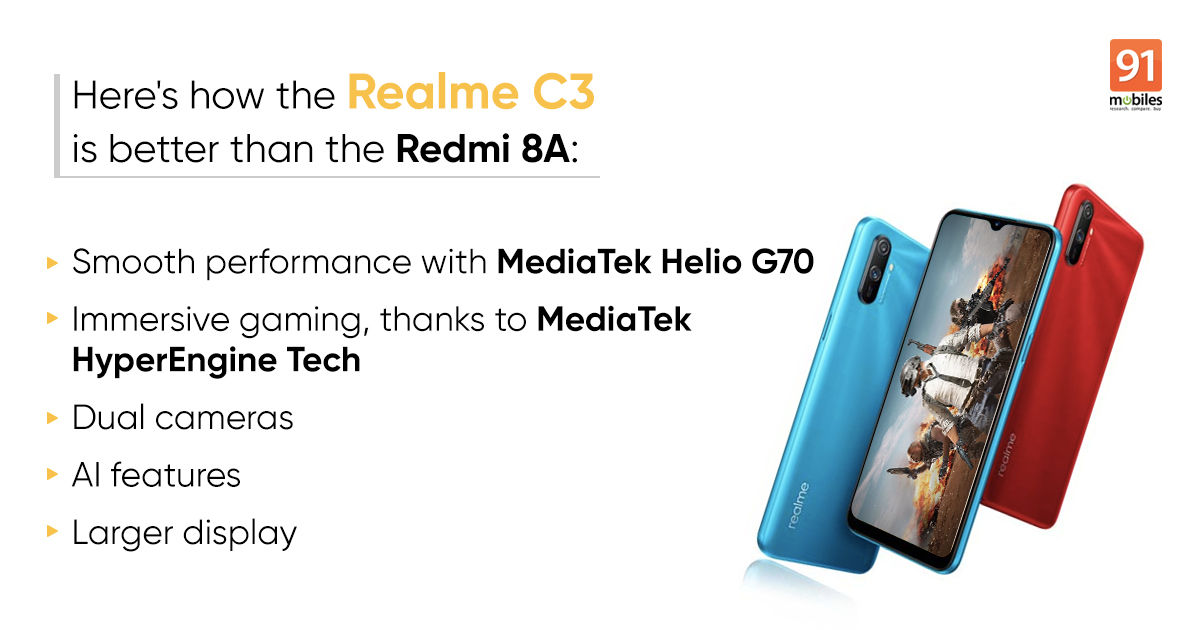 In terms of other features, the Realme C3 still stands ahead of its competition. A major reason behind this is the presence of the MediaTek NeuroPilot AI algorithm. This artificial intelligence understands people’s usage patterns and adjusts aspects such as CPU process distribution automatically to strike an optimum balance between power and efficiency. Lastly, while both phones only have HD display panels, the Realme C3 comes with a larger, 6.55-inch display, in comparison to the 6.22-inch screen of the Redmi 8A. With most individuals demanding larger displays to optimally consume content, the MediaTek-powered Realme C3 comes out of this contest as a clear winner.