91mobiles.com
Home Feature Realme could beat Apple at its own game with MagDart 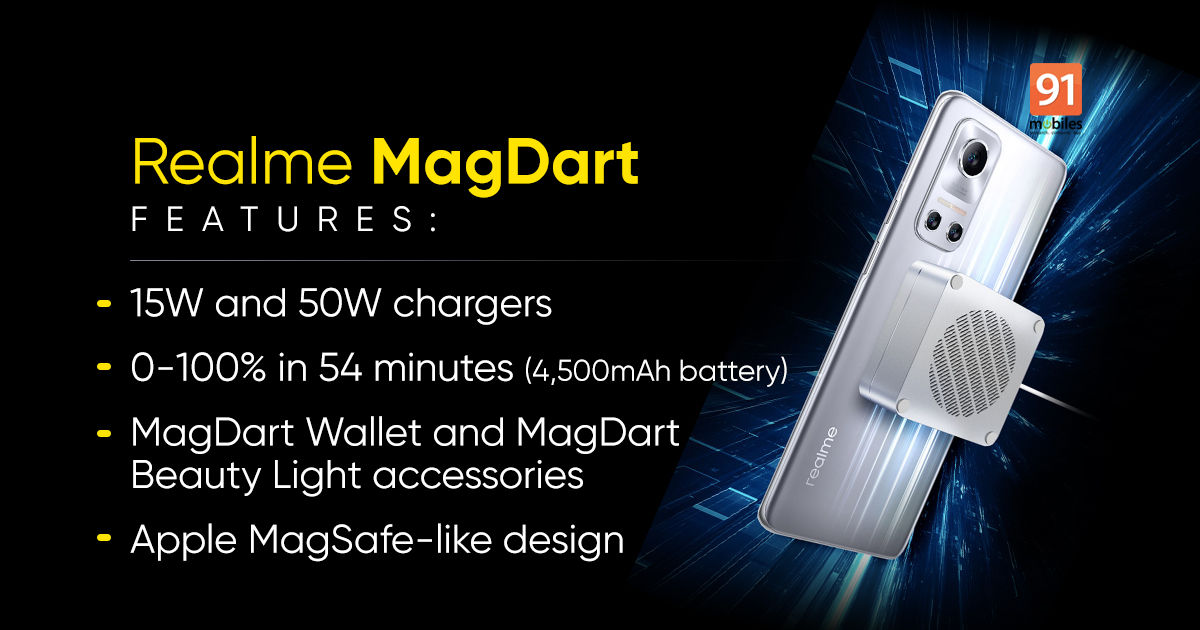 When Apple introduced the notch on its iPhones, Android phone makers got the green light to do the same on their phones. When Apple removed the 3.5mm headphone jack on its iPhone, some Android OEMs followed suit. And when Apple removed the charger from the iPhone retail box, well, you know how the story goes. Last year, Apple came out with a pretty unique solution to eventually killing off the Lighting port – MagSafe. This is Apple’s proprietary technology for magnetic wireless charging and accessory-attachment. iPhone 12 models can be wirelessly charged magnetically using MagSafe chargers from Apple. This idea was too good to be left un-copied, which is why Realme has stepped up to become the first Android OEM to bring the solution in the form of MagDart.

Realme MagDart is a pretty clear and unapologetic ripoff of Apple’s MagSafe. Realme has confirmed that MagDart on the upcoming Realme Flash concept phone is the first Android magnetic wireless charging solution. The circular magnet on the back of the Realme phone will allow you to magnetically attach a puck-shaped or a block-shaped charger that were unveiled recently. 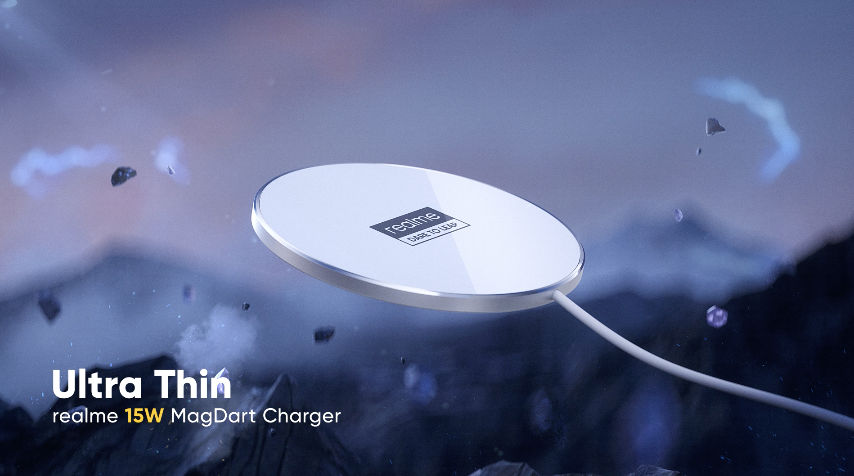 Realme MagDart will support up to 50W fast charging

Here’s where Realme is taking things a step or two ahead of Apple. The brand claims that its MagDart charger is 440 percent faster than the competition. The only competition right now is Apple’s MagSafe, which charges at 15W output. Realme showcased that the larger MagDart charger with a cooling fan will wirelessly charge a Realme phone at 50W output, which is mighty impressive and crushes Apple’s MagSafe charging speeds. The Realme charger will be able to charge a 4,500mAh battery in just 54 minutes, while Apple’s MagSafe charger takes almost 4 hours to charge the iPhone 12 with a 2,775mAh battery. 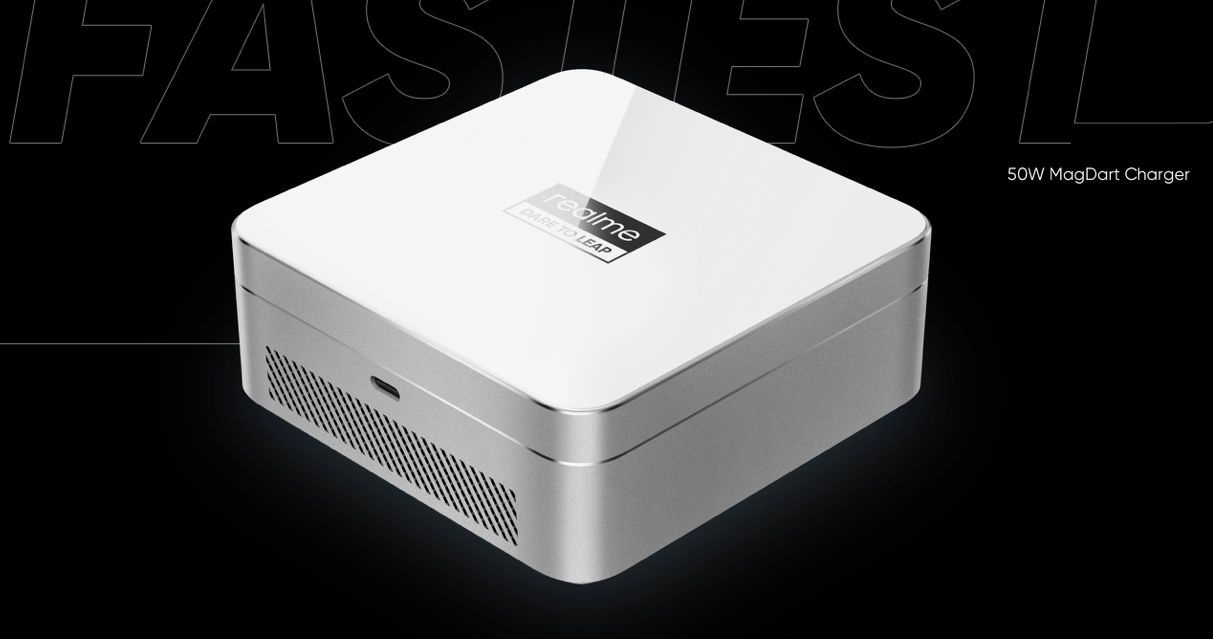 Realme is one-upping Apple in accessories as well

As you would expect, it’s not just MagDart chargers that were announced. Realme is also going to release MagDart accessories like the MagDart Wallet and MagDart Case much like Apple does with MagSafe. Notably, Realme tried to one-up Apple by introducing the MagDart Beauty Light. The brand clearly has more MagDart accessories in mind and they are likely to arrive with affordable price tags. Meanwhile, Apple has been slow at introducing new MagSafe accessories in the market, which third-party brands are taking advantage of. 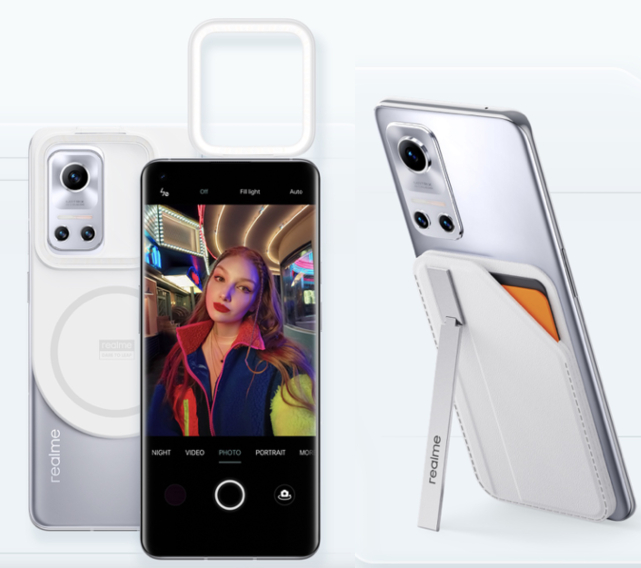 Realme calls itself the democratiser of 5G phones. The brand has launched several affordable 5G devices in the Indian market, with the cheapest one being the Realme 8 5G. It seems the company will also look to be the democratiser of magnetic wireless charging accessories, although it doesn’t quite have a ring to it. Accessories had been a major source of revenue for Apple in the past, and Realme stands to benefit by being the first Android OEM to launch magnetic wireless charging accessories.

Realme phones can actually go port-less before the iPhone

We have been talking about Apple going port-less for a few years now. After Apple axed the headphone jack, there were speculations that the company would eventually remove all the ports on the iPhone and go completely wireless. MagSafe is yet another step for Apple to go port-less. However, until MagSafe wireless charging offers faster charging speeds, Apple won’t ditch the Lightning port so soon.

Realme has the ability to beat Apple here and offer port-less phones in the near future. Think about it. Realme’s MagDart already supports 66W fast charging, which is on par with its wired charging solution. The brand also offers a range of wireless audio products, so it can get rid of the headphone jack. So, a Realme phone with no ports sounds very possible in 2021 as compared to a port-less iPhone in 2021.