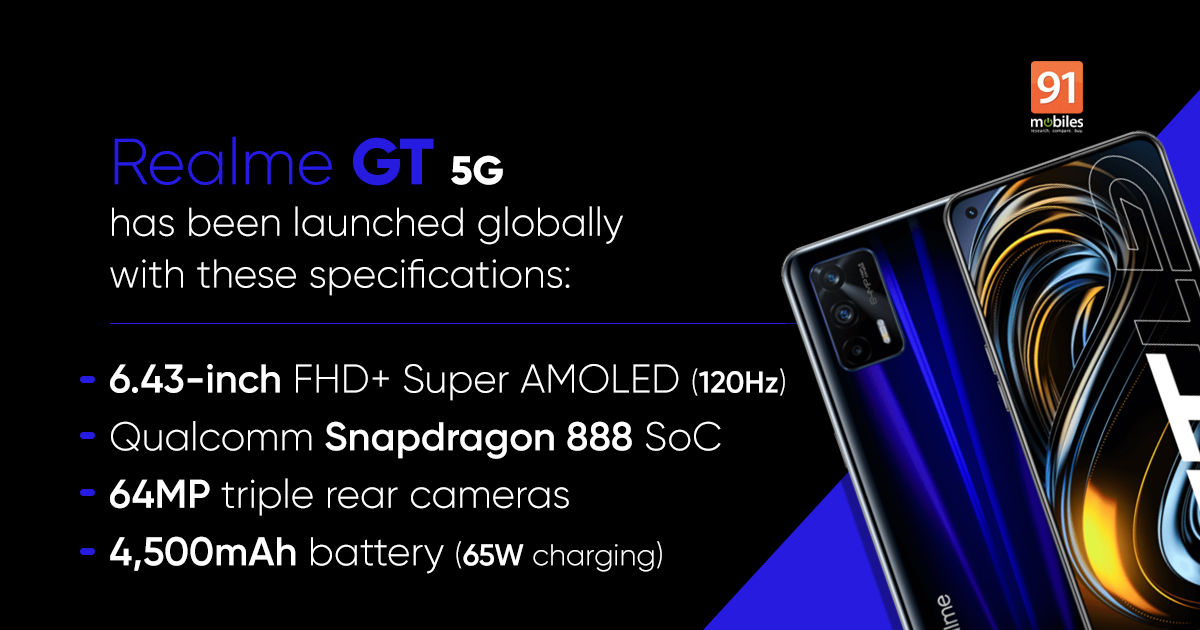 The Realme GT 5G price is EUR 449 (approximately Rs 39,850) in Europe for the base variant, which has 8GB RAM + 128GB storage. The company has also launched a 12GB + 256GB model at EUR 599 (approximately Rs 53,170). The company has announced an Early Bird Price of EUR 369 (approx. Rs 32,750) for the base model. The Realme GT 5G will be available in select European countries at the moment, including, Poland, Spain, Russia, and Thailand, with additional markets to follow. The Realme GT 5G will go on sale in these countries on June 21st from multiple retailers including AliExpress and Amazon.

The Realme GT 5G comes equipped with a 6.43-inch display. It has a full-HD+ resolution, a 120Hz refresh rate, and a 360Hz touch-sensing rate. The screen has a punch-hole mounted to the top-left corner of the screen. According to the brand, the Realme GT 5G has two light sensors (probably for adjusting screen brightness), and 4096 levels of auto-brightness. Oh, by the way, there is also an in-display fingerprint scanner.

Holding true to the flagship nature, the Realme GT 5G uses the Snapdragon 888 SoC, the top-of-the-line chipset from Qualcomm. As I mentioned earlier, the phone can be had in two configurations: 8GB RAM + 128GB storage and 12GB RAM + 256GB storage. To keep the SoC temperature in check, the phone has a stainless steel cooling system. Coming to the software, the Realme GT 5G ships with the Android 11 OS and Realme UI 2.0 customization.

The Realme GT 5G has three cameras at the rear: a 64MP primary sensor, an 8MP ultrawide lens, and a 2MP macro camera. For selfies, you get a 16MP camera. The primary camera at the rear can record 4K videos at 60 frames per second, whereas, the front camera is limited to 1080p recording at 30 frames per second.

The 4,500mAh battery of the Realme GT 5G supports 65W charging, which, according to the brand, will charge the phone from zero to 100 per cent in just 35 minutes. The Realme GT 5G supports the 5G network. Plus, you get two SIM card slots, dual-band Wi-Fi 6, Bluetooth v5.2, dual-band GPS, NFC, a 3.5mm audio jack, and a USB Type-C port. There are also stereo speakers onboard. You can get the phone in three color options: Dashing Silver, Dashing Blue, and Racing Yellow. The last color variant has an ‘Ultra-fine-grain Leather 2.0,’ which is fingerprint-resistant.

The Realme GT 5G will launch in India later this month, but the company is yet to reveal the launch date.

While you wait for the Realme GT India launch, you can check out news about the upcoming smartphones as well as popular product recommendations on our Facebook, Twitter, and Instagram pages and head to our YouTube channel for the latest videos.