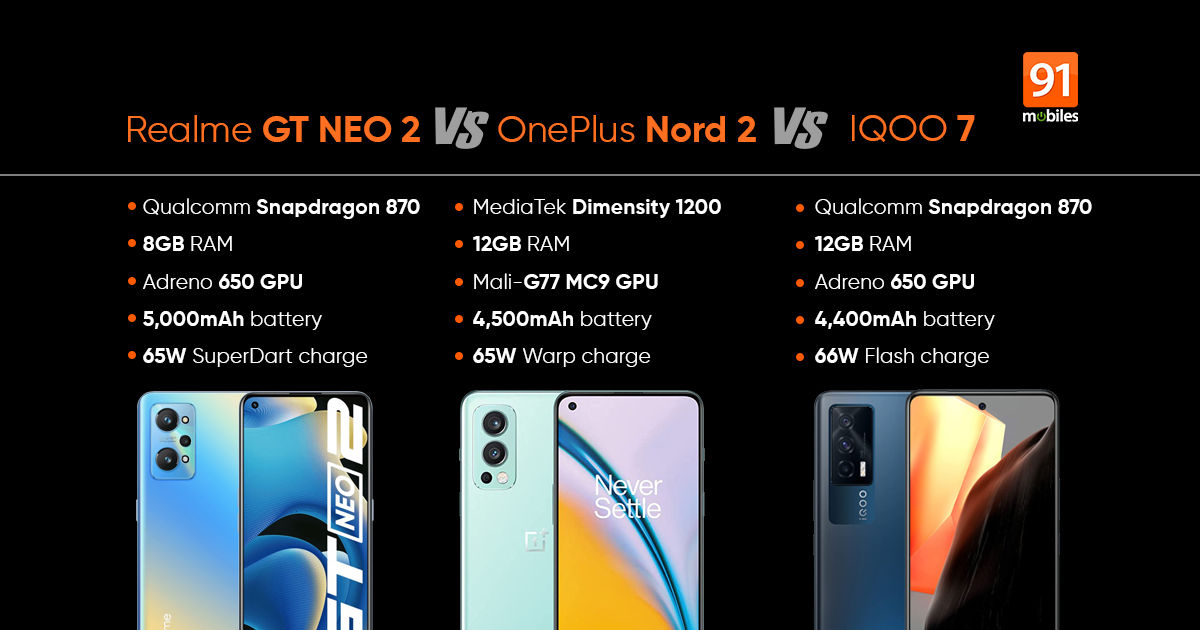 Realme’s latest power-packed smartphone comes in the form of the GT NEO 2 (review) and its starting price of Rs 31,999 is quite compelling for the specs on offer. This is the first phone from the brand to harness the processing capabilities of Qualcomm’s Snapdragon 870 chipset. As a budget flagship smartphone, the Realme GT NEO 2 obviously has a lot of competition from several other OEMs. The OnePlus Nord 2 (review) and iQOO 7 (review) are two other devices in this price segment that have been doing quite well since their release and it seems only fitting to pit them against the GT NEO 2. In this comparison let’s look at how all three smartphones fare in terms of benchmark numbers, BGMI gaming, battery test, and charging speeds. 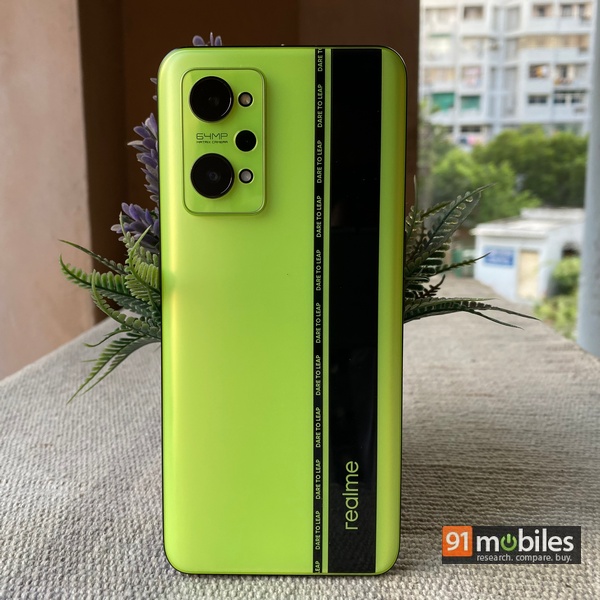 Before the comparison let’s get some basic specs out of the way.

Benchmarks such as Geekbench give a fair idea about the single-core and multi-core functionality of a smartphone’s chipset. All three phones operate on a 1+3+4 architecture instead of the usual big.LITTLE configuration. In the case of the Qualcomm Snapdragon 870, the chipset relies on one ‘Prime’ Cortex A77 CPU spinning at 3.2GHz, three performance Cortex A77 cores which have a 2.42GHz clock speed, and four efficiency Cortex A55 cores. The Dimensity 1200 packs in a 3GHz Cortex A78 alongside three other Cortex A78 cores spinning at 2.6GHz and four efficiency Cortex A55 CPUs. I should also mention that the Snapdragon 870 actually has a larger 7nm fabrication process being used as compared to 6nm on the Dimensity 1200 indicating that the latter should be slightly more power-efficient. Realme GT NEO 2 got multi-core and single-core scores of 3,122 and 1,016 respectively. The OnePlus Nord 2 returned scores of 2,633 and 818 while the iQOO 7 gets scores of 3,049 and 973. Both the Snapdragon phones are clearly at an advantage over the Dimensity-powered Nord 2, more so in the multi-core department.

Antutu factors into its overall score the GPU capabilities, how good the UX is, and the memory as well alongside CPU performance. The Realme GT NEO 2 got an overall score of 722,028 while the Nord 2 and iQOO 7 scored 622,228 and 711,148 respectively. The GT NEO 2 has the highest score while having lower RAM than both its competitors. While the iQOO 7 has a comparable overall score, the Nord 2 is in fact lower by about 14 percent than the GT NEO 2. In terms of temperature gain and battery dropped, all three phones are about the same.

All three phones have been quite impressive in the graphics department, but to find out which phone has the best GPU capabilities, 3DMark’s Wild Life is a reasonable metric. While running the simulation, the Realme GT NEO 2 returned a score of 4,227 with an average frame rate of 25.30fps. The Nord 2 got a score of 4,178 with a frame rate of 25fps while the iQOO 7 got 4,212 with 25.20fps. As is clear, from this test, all three devices fared similarly in terms of handling a heavy graphical load.

Lastly, it is also important to know how much of the performance on a chipset is throttled under sustained load. The CPU Throttle app is quite helpful for determining this through a 30-minute cycle. On the Realme GT NEO 2, the peak performance was maintained at about 90 percent for the duration of the test, which is quite impressive but the CPU manages to get really hot at 95 degrees. On the Nord 2 however, peak performance drops slightly below 80 percent but maintains a much cooler 50 degrees temperature. The iQOO 7 fluctuates between 80 – 85 percent peak performance and also runs quite hot at 90 degrees. It is clear that the Nord 2 throttles the most but does so to maintain healthy CPU temperatures while the GT NEO 2 retains a lot of its performance but at the expense of running hot.

Battlegrounds Mobile India can be considered a demanding and performance-intensive game, and is also very popular in the Indian market. To run the game at HDR graphics and Extreme frame rate options is at the absolute top of the configuration pedestal at the moment. The iQOO 7 and the Realme GT NEO 2 are able to run the game on this configuration without a hitch. However, the Dimensity 1200-powered Nord 2 is only able to run the game at Smooth graphics coupled with Extreme frame rate. The option for UHD graphics is labelled as coming soon. This is a limitation that should be considered by BGMI enthusiasts while purchasing the device. In any case, to keep the comparison fair, I ran the game at the Smooth-Extreme configuration on all three devices for 30 minutes. On the OnePlus Nord 2, the device ran quite well without any noticeable frame drops but did get heated up by about 8 degrees for the duration of the test and dropped 9 percent battery. The same numbers for the Realme GT NEO 2 were 6 degrees and 5 percent while for the IQOO 7 they were 7 degrees and 7 percent. It is important also to know that the GT NEO 2 has a bigger 5,000mAh battery giving it a distinct advantage over the other two devices.

PCMark has a very useful tool to gauge the real-life battery performance of a smartphone by looping a simulation of everyday tasks on the device. Based on this the benchmarks return a time score that gives a very good idea of how long the smartphone can last. The Realme GT NEO 2 has a bigger battery and scores 15h 26m on the test. Surprisingly the iQOO 7 with the smaller 4,400mAh battery manages to get a time of 18h 58m which is about 20 percent longer than the GT NEO 2. The OnePlus Nord 2 comes last with a score of 13h 38m.

All devices have about the same charging speeds with the iQOO 7 having a slightly faster 66W charging as compared to 65W on the other two devices. For the GT NEO 2, the device took only 27 minutes to charge from 20 to 100 percent.  However, the iQOO took 35 minutes to do the same with its smaller battery. The quickest amongst the lot was actually the Nord 2 which took just 23 minutes to juice up.

I think it is clear from this comparison that the Realme GT NEO 2 is a performance and gaming champ. The device’s CPU does run a bit hot under sustained loads, but overall the cooling system on the device does a good job of maintaining peak performance. As far as gaming goes, only a Snapdragon 888-powered device can oust the GT NEO 2 from its pedestal and the device is very likely to appease BGMI enthusiasts. The battery life as a whole is above average and should last you a day at least although in that department the iQOO 7 does look to be better. Charging speeds on each device are quite consistent and the Nord 2 does win a point here but by the barest of margins. Overall, the Realme GT NEO 2 is a spectacular performance beast that you should definitely consider if you are a power user.