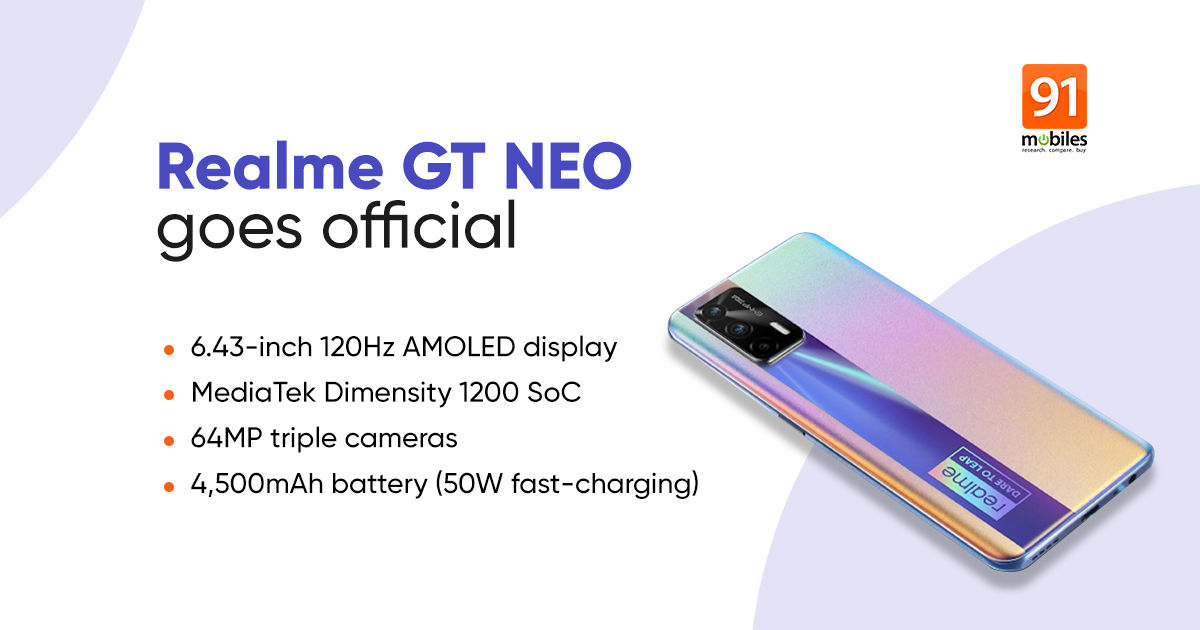 Realme GT Neo price and specifications have been revealed as the phone is officially launched in China. It is a variant of the Realme GT that launched earlier this month with the Snapdragon 888 SoC. The Realme GT Neo comes with a punch-hole camera, triple rear cameras, and a dual-tone gradient finish. Realme GT Neo specifications include the MediaTek Dimensity 1200 5G SoC, a 6.43-inch AMOLED display, and a 4,400mAh battery with 65W fast-charging support. The phone is expected to launch in India soon as it has received the BIS certification. Realme GT Neo sports a 6.43-inch FHD+ AMOLED display, with a 120Hz refresh rate and corner punch-hole camera. It is powered by the MediaTek Dimensity 1200 SoC paired up to 12GB LPDDR5 RAM and 128GB UFS 3.1 storage that should be further expandable via a microSD card. The phone runs on Android 11-based Realme UI 2.0 custom skin on top and has an in-display fingerprint sensor for security and a 4,500mAh battery with 50W fast-charging support.

As for cameras, Realme GT Neo has triple cameras at the back with a 64MP primary sensor, an 8MP wide-angle lens, and a 2MP camera. Connectivity features could include 5G, 4G LTE, Bluetooth 5.1, dual-band Wi-Fi, GPS, and USB Type-C port for charging and data transfers. The handset measures 8.4mm in thickness and weighs 179 grams. Other features include a GT mode and VC cooling technology.