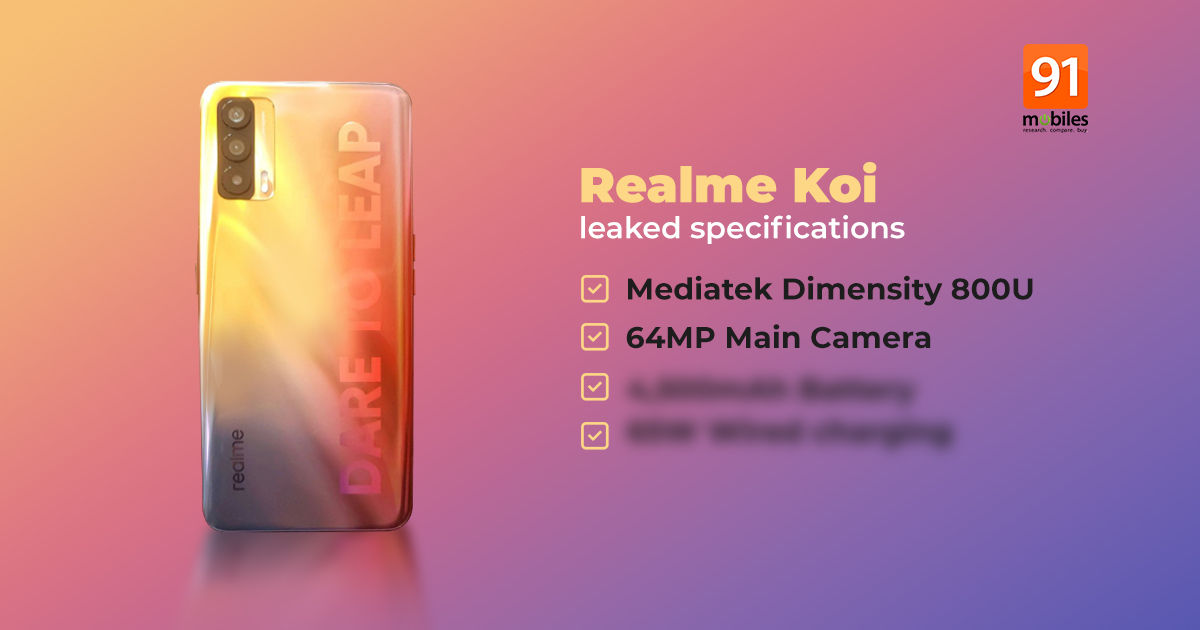 The Realme Koi launch was recently teased by the brand on Weibo; the upcoming smartphone is expected to be a part of the new series that will also include the Realme Race handset. Now, alleged live images of Realme Koi aka Realme V15 — which will apparently be the actual marketing name of the phone — have surfaced on Weibo and spotted by Twitter user @yabhishekhd. Alongside the shots, @yabhishekhd has shared some Realme Koi (V15) specifications, which suggest it will be a premium mid-range offering rather than a flagship.

Realme Koi (V15), as seen in the live images, has a 64MP triple rear camera setup and an LED flash arranged in a rectangular module at the top left corner. It has Realme branding and the company’s ‘Dare to Leap’ tagline etched on the back panel. The phone seems to have a glossy finish and gradient colour scheme. The volume rocker is on the left, while the power button is placed on the right. Since it doesn’t have a fingerprint sensor cutout, it could be placed within the display, meaning we can speculate the Realme Koi (V15) may arrive with an AMOLED display.

As for the specifications, Realme Koi (V15) is tipped to come with Mediatek Dimensity 800U chipset and 50W fast-charging support. The smartphone will reportedly weigh 176 grams. The live images show the handset will pack a 64MP primary sensor and while details regarding the other two sensors are a mystery, we can speculate they could be a wide-angle lens and a depth or macro sensor. Unfortunately, that’s pretty much everything we know about the Realme Koi at the moment but since the brand had started teasing it officially, we hope to learn more information going forward. Stick around.