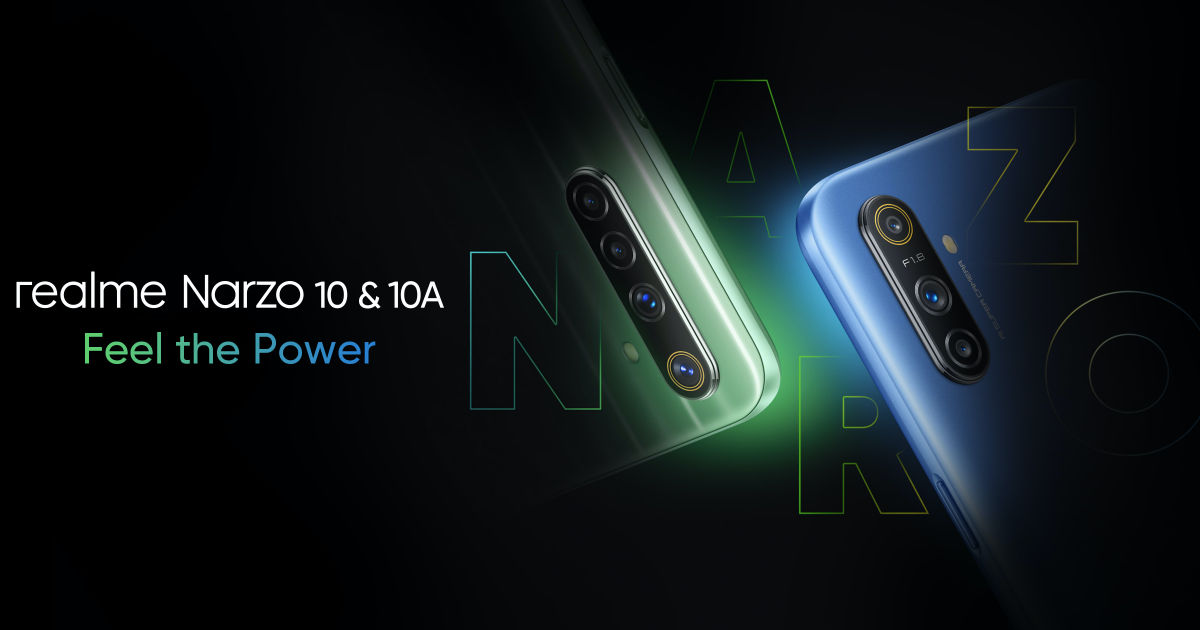 “Realme Narzo 10 and Narzo 10A will launch in India on March 26th with key specifications like 5,000mAh battery, fast charge support and gaming processors”

Realme Narzo 10 and Narzo 10A are the names of the upcoming Narzo series phones, and the company has now confirmed they will be launching in India on March 26th through an online event that will begin at 12:30 PM. The teaser poster reveals the former will have a vertically quad-camera setup, while the latter will have triple cameras. The design of the Realme Narzo 10 is similar to the recently launched Realme 6i in Green Tea colour. While the Narzo 10A will be available in at least Blue colour option and possibly a polycarbonate build. The Realme website has revealed key Realme Narzo 10 and Narzo 10A specifications ahead of the India launch event, including details like 5,000mAh battery, fast charging support and the fact that they will be powered by gaming processors.

Get ready to #FeelThePower as we unleash the bold and the unique with #realmeNarzo10 and #realmeNarzo10A!
Launching at 12:30 PM, 26th March on our official channels.
Know more: https://t.co/fMrX6tt9CJ pic.twitter.com/0W2pZQoZAP

The Realme 10 will have 48MP AI quad-camera setup at the back, which possibly is the Samsung GM1 or the newer GM2 sensor. Realme also confirmed the phones will ship with “A Class processor for the first time in India” that is built for gaming. It is unclear what these processors are at the moment. If the Narzo 10 is indeed a rebranded Realme 6i, then it could feature the Helio G80 SoC. This would make the Narzo 10 the first smartphone to launch with the Helio G80 processor in India.

The Realme website further reveals that the Narzo 10 series will feature a 5,000mAh battery with quick charge support. The Realme Narzo 10 and Narzo 10A will also flaunt 6.5-inch displays with 89.8 percent screen-to-body ratio and a waterdrop notch to house the selfie snapper.

Now that we know that the Realme Narzo 10 series is launching in India on March 26th, it won’t be long before we know the full specifications and prices of the two smartphones. Based on the details shared by the company on the official website, the Narzo 10 and Narzo 10A look like budget smartphones that could slot below the Realme 6.