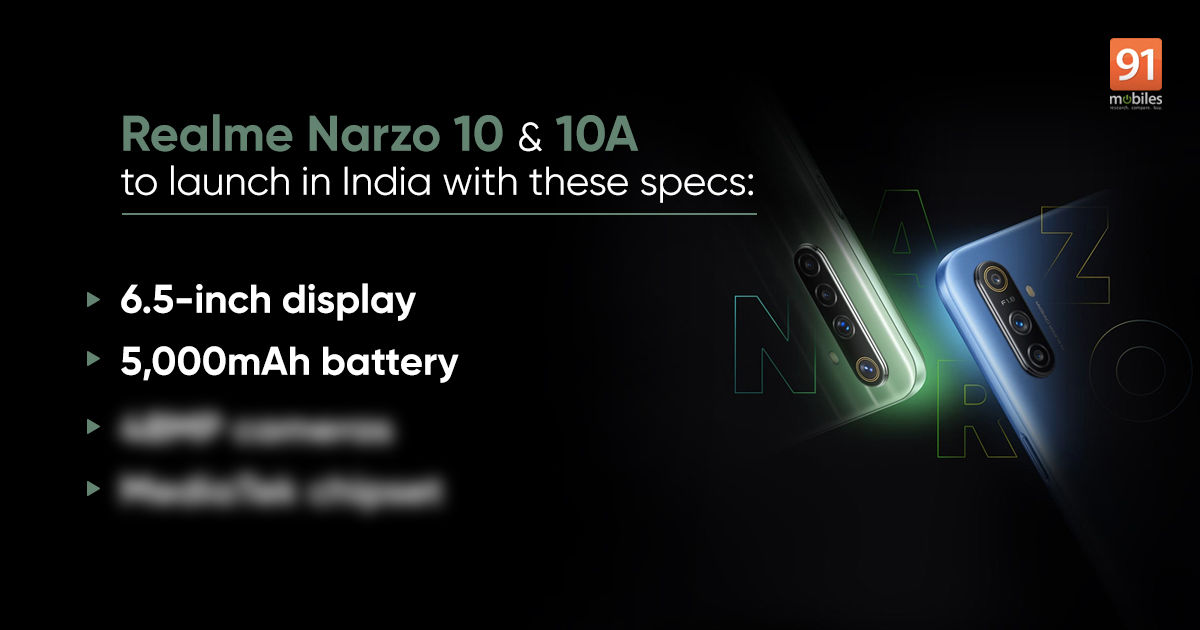 Update: Realme announced on Monday that it has postponed the launch of the Narzo 10 series indefinitely. This comes a day after the Ministry of Home Affairs said that e-commerce platforms will not be able to deliver non-essential products like smartphones during the lockdown.

Realme Narzo 10 series managed to generate a lot of buzz last month as the new series was announced out of nowhere by Realme. While the Indian launch of the handsets was initially scheduled to be on March 26th, following the lockdown announcement from the government, the launch was postponed indefinitely. The brand has rescheduled the launch date to April 21st, but this may also change given that e-commerce platforms cannot sell non-essential products like smartphones until the lockdown ends, as per the new directive by the Ministry of Home Affairs. In case you have forgotten, Realme is expected to launch the Narzo 10 and Narzo 10A, and here’s a quick roundup of everything we know about their specifications, expected prices in India and launch date.

As stated above, the Realme Narzo 10 series is expected to launch on April 21st via an online-only event. However, with e-commerce platforms not allowed to deliver non-essential commodities until May 3rd, it is unclear whether Realme will go ahead with the launch tomorrow or whether the company will be forced to reschedule the event.

The Realme Narzo 10 price in India has been tipped to be under Rs 15,000 but its actual price could be closer to Rs 10,000 as the series is expected to be positioned under the Realme 6 series. If that is the case, the Realme Narzo 10A might come with a price tag of around Rs 9,000.

Realme Narzo 10 has been confirmed to feature a 6.5-inch display with 89.9 percent screen-to-body ratio and a waterdrop notch for the selfie camera atop. The handset is said to be driven by “A Class processor for the first time in India”, which is speculated to be MediaTek’s gaming-centric Helio G80 chipset. This would make the Narzo 10 series the first smartphone to launch with the Helio G80 processor in India. While RAM and storage variants for the Narzo 10 are not yet clear, the Realme 6i comes with choices for 3GB or 4GB of RAM, and 64GB or 128GB of native storage.

For photography, the Realme Narzo 10 will sport quad rear cameras with 48MP primary sensor – presumably Samsung’s GM1 or the newer GM2 sensor. This could be paired with an 8MP 119-degree ultra-wide sensor, a 2MP 4cm macro lens, and a 2MP B&W depth sensor with f/2.4 aperture, just like the Realme 6i. The handset may feature a 16MP shooter with f/2.0 aperture on the front for selfies and video calling.

The Realme Narzo 10 will house a 5,000mAh battery with fast charging support that is likely to be 18W. The handset may boot Android 10-based Realme UI out of the box and sport a rear-mounted fingerprint scanner for security. In terms of connectivity, the phone could feature Dual SIM 4G VoLTE, Wi-Fi, Bluetooth 5, GPS/ GLONASS/ Beidou, USB Type-C, 3.5mm headphone jack, and FM radio. Lastly, the phone may measure 164.4 x 75.x 9.0mm and weigh 195g.

Realme Narzo 10A is expected to be a watered-down version of the Realme Narzo 10. The handset will be the first offering from the brand to rock triple rear cameras. The camera resolutions are unknown at the moment. The Realme Narzo 10A, meanwhile, could feature a 6.5-inch waterdrop notch display, 5,000mAh battery, and MediaTek Helio G80 chipset.