“Realme Narzo 10 series India launch date is still set for March 26th, but the company will be postponing the first sale of the Narzo 10 and Narzo 10A”

Realme Narzo 10 and Narzo 10A smartphones are scheduled to launch in India on March 26th. The company says that it has pre-recorded the launch event, which will be live-streamed on Thursday at 12:30 PM. However, due to the spread of the coronavirus in India and state lockdowns across the country, the company has announced that it will be postponing the sale of the Narzo 10 series, while the launch event on March 26th will proceed as per schedule. In addition to postponing the Narzo 10 sale date, the brand will be putting current stocks on hold and will halt its ‘Make in India’ facility till further government notice. Realme is also telling its staff to work from home, Realme India CEO Madhav Sheth said in a tweet. This comes just a day after Xiaomi postponed the first sale of the Redmi Note 9 Pro Max. 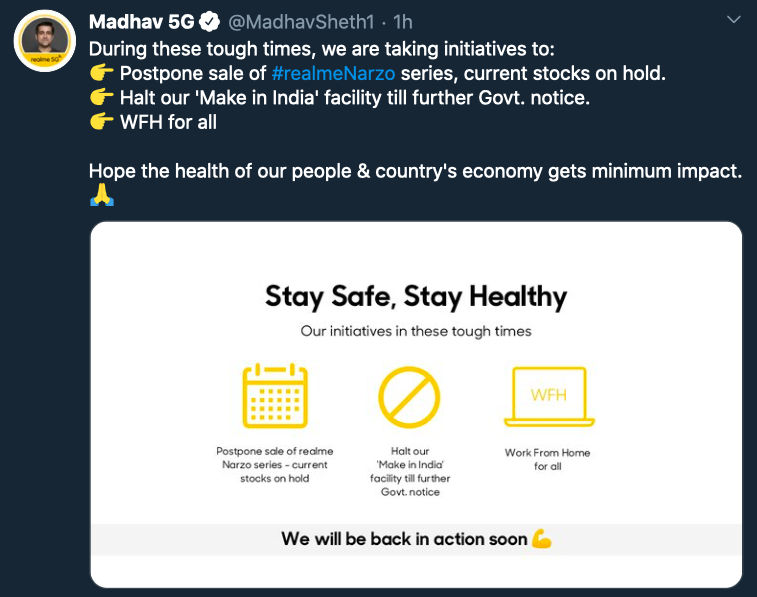 Realme Narzo 10 and Narzo 10A specifications

So far we know that the Realme Narzo 10 and Narzo 10A are confirmed to flaunt 6.5-inch displays with 89.8 percent screen-to-body ratio and a waterdrop notch to house the selfie snapper. Both the phones will launch with gaming-centric chipsets and should run Android 10 OS with Realme UI custom skin on top. Both the phones are also expected to feature a rear-mounted fingerprint sensor for security.

In terms of optics, the Realme Narzo 10 will ship with a 48MP AI quad-camera setup at the back, which possibly is the Samsung GM1 or the newer GM2 sensor. The Narzo 10A, however, will have a triple camera setup at the back. Both the phones are confirmed to rock a 5,000mAh battery with quick charge support. Connectivity options include Dual SIM 4G VoLTE, Wi-Fi, Bluetooth 5, GPS, USB Type-C, 3.5mm headphone jack, and FM radio. Noted tipster Ishan Agarwal tipped the Realme Narzo 10 price will start under Rs 15,000, but the actual pricing could be closer to Rs 10,000 and should be positioned under the Realme 6 series.