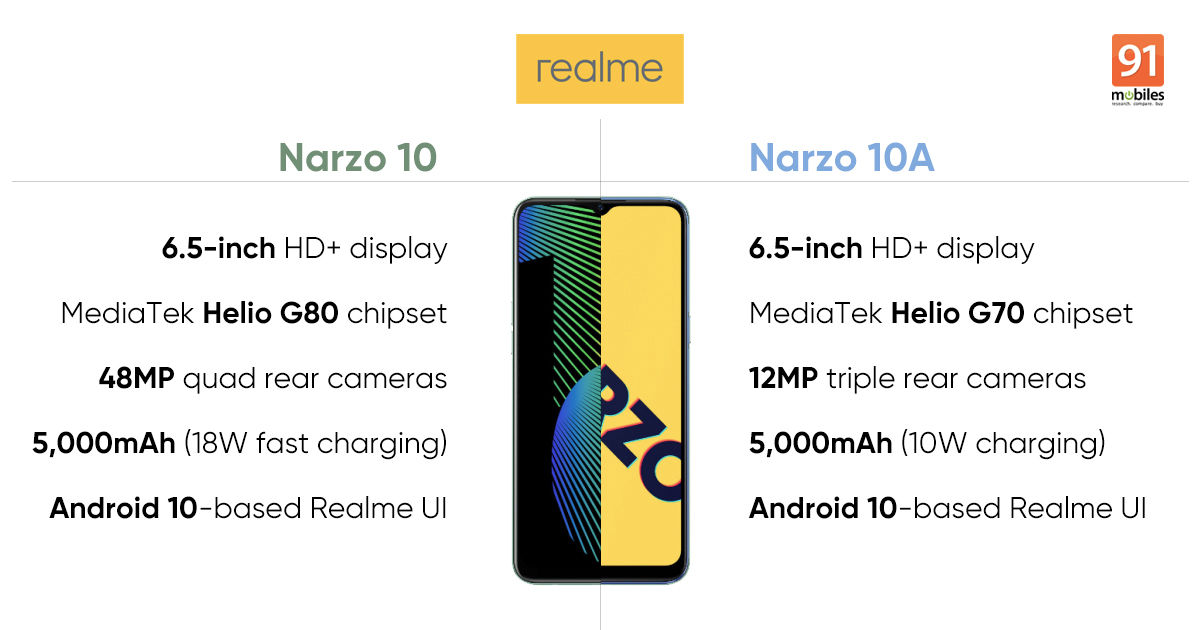 Realme Narzo 10 and Narzo 10A price in India

The Realme Narzo 10 has been priced in India at Rs 11,999, whereas the Realme Narzo 10A comes with a sticker price of Rs 8,499. The handsets will be available for sale in the country starting from May 18th onwards via Flipkart and Realme’s official website.

The Realme Narzo 10 comes with 4GB RAM and 128GB user-expandable storage, whereas the Narzo 10A ships with 3GB RAM and 32GB storage onboard. The storage on both offerings is further expandable up to 256GB via a dedicated microSD card slot.

The design for Realme Narzo 10 is inspired by Realme X Ginger and Garlic edition smartphone. The phone has a dual-tone finish and will be available for sale in That Green and That White colour options. The Realme Narzo 10A, on the other hand, features matte finish and comes in So White and So Blue hues.

Apart from this, both Realme Narzo 10 and Narzo 10A feature 6.5-inch HD+ display with waterdrop notch atop, 20:9 aspect ratio, and Gorilla Glass 3. The phones run Realme UI atop Android 10 out of the box. There is a rear-mounted fingerprint scanner for security. Connectivity options include 3.5mm headphone jack, Wi-Fi, Bluetooth 5.0, 4G LTE dual SIM slots, and GPS/ GLONASS. The Realme Narzo series measures 164.4mm x 75.4mm x 9.0mm and weighs 199 grams.