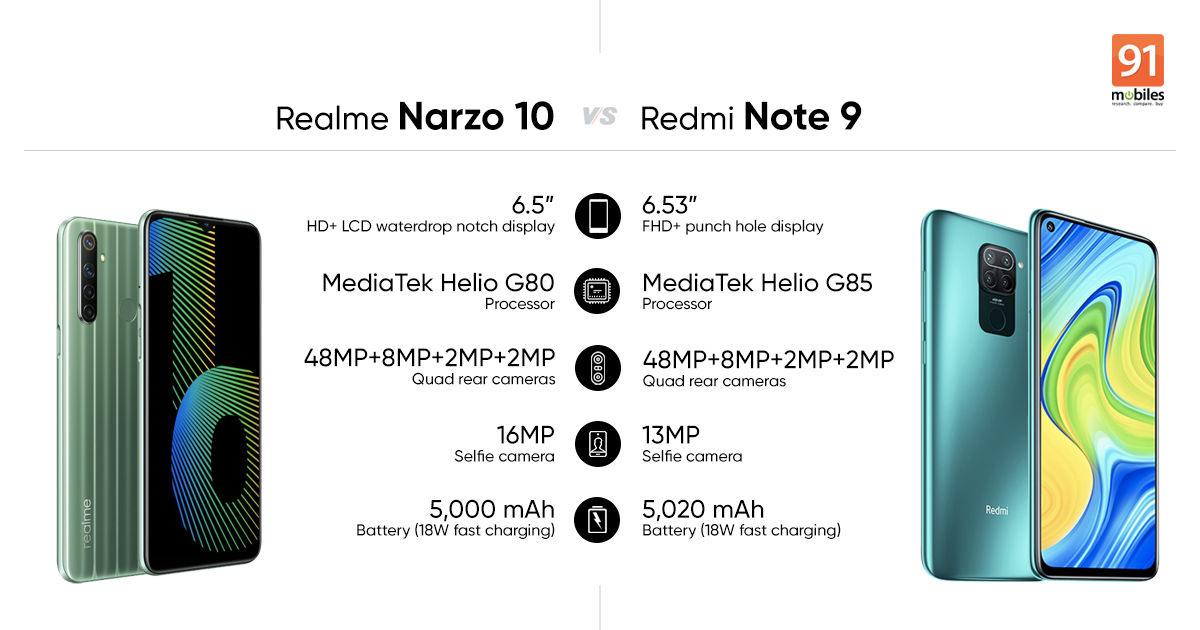 Realme Narzo 10 ships with a 6.5-inch HD+ waterdrop notch display. The phone’s design is inspired by Realme X Master Edition smartphone from last year. The rear panel has dual-tone finish and quad cameras vertically-aligned in the top left. As for the spine, the Realme Narzo 10 has a volume rocker on the left spine and power button on the right. The bottom edge houses USB Type-C port, speaker grill, and 3.5mm headphone jack.

The Redmi Note 9, on the other hand, is almost identical to its elder siblings Redmi Note 9 Pro and Note 9 Pro Max. There is a punch-hole display on the front and quad rear cameras aligned in 2×2 grid on squarish camera module at the back. The handset features a 6.53-inch HD+ display of LCD variety with punch-hole for the selfie camera in the top right corner. The volume rocker and power button are aligned on the right spine, whereas the USB Type-C port, headphone jack, and speaker grille are at the bottom edge.

The Realme Narzo 10 is powered by MediaTek Helio G80 chipset, which is aided 4GB of RAM and 128GB storage onboard. In contrast, the Redmi Note 9 has MediaTek Helio G85 SoC, which is basically the same chipset as Helio G80 but with tweaked GPU performance. This means that the Note 9 should offer slightly better graphics compared to Narzo 10. The Redmi handset also ships with up to 4GB RAM and up to 128GB storage onboard. Both phones have a dedicated microSD card slot; however, Narzo 10 supports storage expansion up to 256GB, whereas the Redmi Note 9 supports 512GB external storage.

Software-wise, the Realme Narzo 10 runs Android 10-based Realme UI out of the box, while Redmi Note 9 boots MIUI 11 atop Android 10.

We’ll have to wait for the review to determine the real-world difference between the phones’ camera performance, but on paper Realme Narzo 10 and Redmi Note 10 both sport exactly the same optics on the back. The two handsets rock quad rear camera setups, consisting of a 48MP primary sensor with f/1.8 aperture, an 8MP ultra-wide-angle sensor with 119-degree field-of-view, and a 2MP depth-of-field sensors for portraits, and a 2MP macro lens. As for selfies, Realme Narzo 10 has a 16MP f/2.0 front camera, while the Redmi Note 9 gets a 13MP f/2.25 shooter for selfies and video calling.

Both Realme Narzo 10 and Redmi Note 9 feature a 5,000mAh battery with 18W fast charging support. There is a rear-mounted fingerprint scanner for security, and in terms of connectivity, they feature 4G LTE, dual SIM slots, Wi-Fi, Bluetooth 5.0, GPS/ GLONASS, and a dedicated 3.5mm jack for audio, so little difference there.

The Realme Narzo 10 price in India is Rs 11,999 and the smartphone comes in only 4GB + 128GB configuration. The handset will be available for sale in the country in That Green and That White colour options starting 12pm on May 18th via Flipkart and Realme.com.

In contrast, the Redmi Note 9 price in Europe is set at $199 (approx Rs 15,000) for the 3GB RAM and 32GB storage variant and goes up to $249 (approx Rs 18,700) for the 4GB + 128GB option. In India, the phone is likely to be priced much more competitively. Looking at the market dynamics, the Redmi Note 9 price in India may start around Rs 12,000. The handset comes in Forest Green, Polar White and Midnight Grey colours.