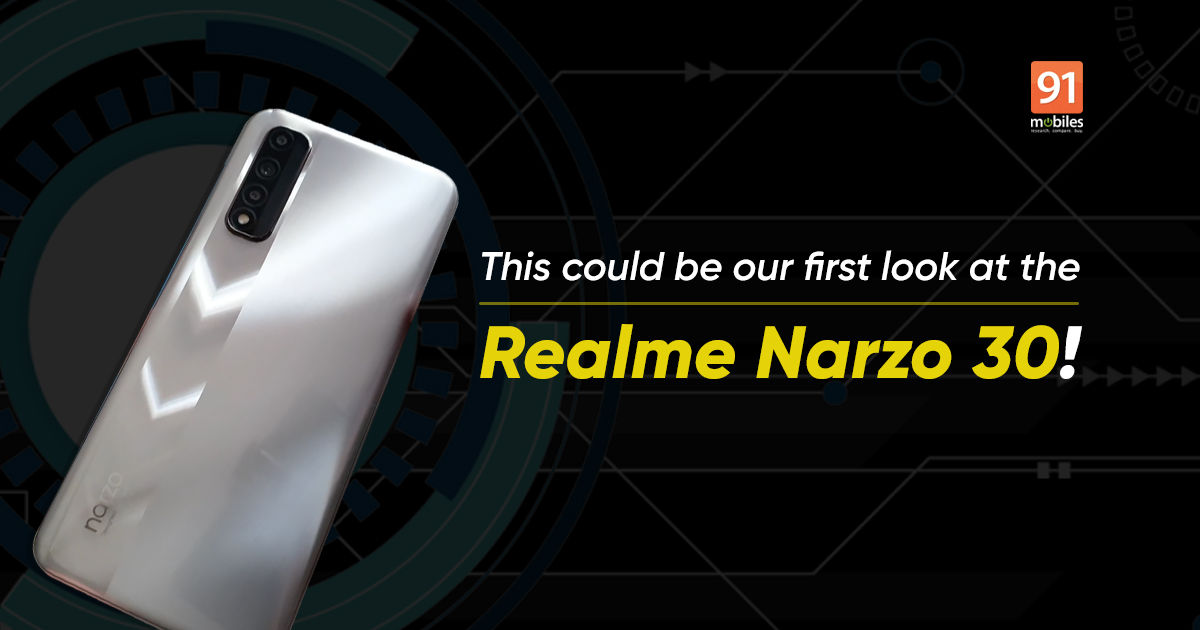 Realme Narzo 30 Pro and Narzo 30A were launched in India back in February as successors to the Narzo 20 Pro and Narzo 20A. However, the brand hasn’t launched the vanilla Realme Narzo 30 yet, but the company did reveal that it was in the works in both 4G and 5G versions. Now, Realme has officially confirmed the Narzo 30 launch date in Malaysia is May 18th. Ahead of the launch, Mark Yeo Tech has posted the unboxing video of the device, revealing the entire design and key specifications. Let’s have a look at what the Realme Narzo 30 has to offer.

The Realme Narzo 30 has a punch-hole cutout on the top left corner for the selfie snapper and slim bezels. The back of the phone has a rectangular camera module with triple sensors and an LED flash. We also see Narzo branding on a vertical strap with an arrow pattern. The volume rockers are on the left spine, while the fingerprint sensor is placed on the right side. The phone seems to be available in a silver option. Realme Narzo 30 sports a 6.5-inch FHD+ LCD display with a 90Hz refresh rate and 580 nits brightness. It is powered by the MediaTek Helio G95 SoC, which is similar to that of Realme 8 and Redmi Note 10S. The Geekbench listing showed it will have 6GB of RAM, but we can speculate there could be a 4GB model as well. It is said to run Android 11-based Realme UI 2.0 custom skin out of the box. As for optics, the Narzo 30 will have a 48MP triple camera setup at the back with a 2MP macro lens and a 2MP B&W sensor.

The phone is said to get a 16MP snapper on the front for selfies and video chats. A 5,000mAh battery with 30W fast-charging support fuels the phone. Realme Narzo 30 is said to have a USB Type-C port, 3.5mm audio jack, and a dedicated microSD card slot for memory expansion. The phone is said to weigh 192grams, and 9.4mm thick.