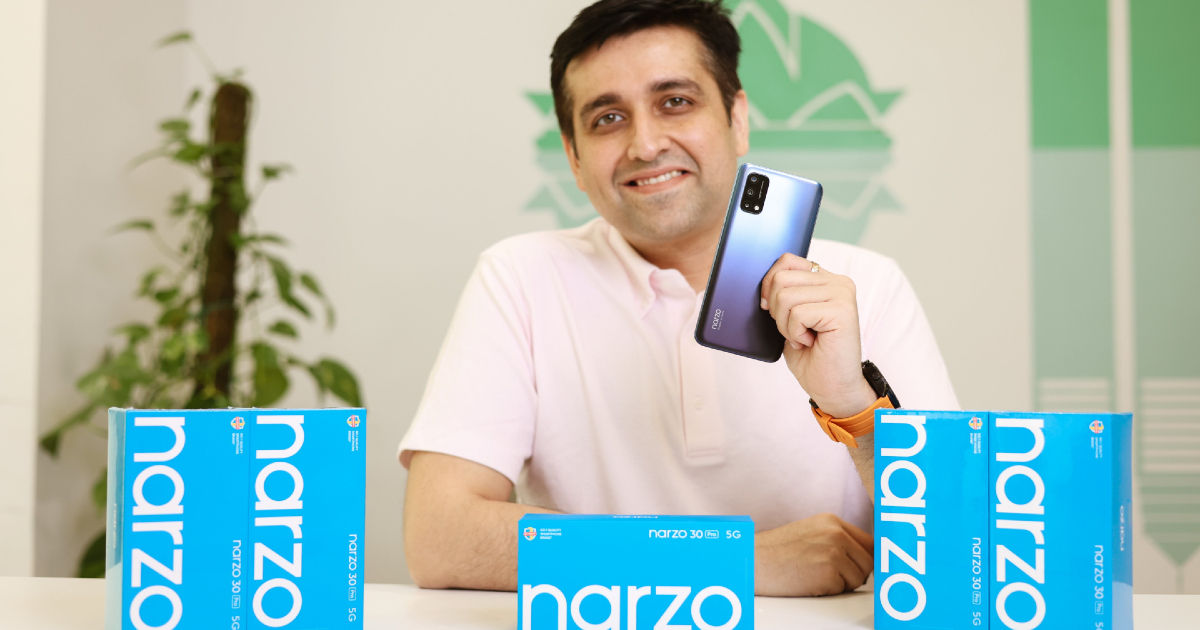 After the Narzo 10 and Narzo 20 series, the Realme Narzo 30 series is gearing up to launch in India soon and speculations are rife that it may happen before the end of this month. Now, in an exclusive interview with XDA Developers, Realme CEO, Madhav Sheth has revealed key Narzo 30 specifications and more about the upcoming lineup. The top executive has officially confirmed that one of the devices in the Realme Narzo 30 series will be powered by the MediaTek Dimensity 800U and have 5G connectivity, which should be the Narzo 30 Pro going by the recent leaks and developments.

Separately, Madhav Sheth tweeted an image that shows him holding the Narzo 30 Pro 5G in his hand. The phone is shown in a gradient blue colour with a rectangular rear camera module that seems to house triple cameras. M

Glad to announce a new program named #MadhavsTechSquad, where #realmeCommunity members will get a chance to review our upcoming offerings, before we launch it to the masses.

Kicking off the program off with 5 #realmeFans for the upcoming #Narzobyrealme Launch. Stay tuned! pic.twitter.com/9IRJnvLgCR

“One of the devices in the Narzo 30 series will sport the latest MediaTek Dimensity 800U 5G processor at a never-before-seen price,” said Sheth. Considering the Realme X7 also ships with the same chipset and is priced at Rs 19,999, the upcoming Narzo phone could be cheaper than that. Furthermore, Madhav says that 5G is the key focus this year and it was one of the firsts to bring 5G flagship — Realme X50 Pro back in 2020. Sheth says Narzo series will be the “democratiser for 5G.” The brand plans to introduce 5G technology to the budget segment and expand to other devices.

The upcoming Narzo series is being marked with minimal Realme branding and the retail box also has a new style with Narzo marketing all over. There’s minimal to no notable mention of Realme. This led to a curiosity of whether Realme would spin-off Narzo as an independent entity like Realme did with parent company OPPO back in 2018. Clarifying this, Sheth said the company is embracing a new branding and logo for the Narzo series “to better cater to the young players. Narzo is a part of realme and is not a sub-brand. It will continue to be a part of realme.”

The top executive has also said Realme doesn’t have any plans to bring features that will be exclusive to Narzo series. The key differentiators according to the executive are gaming-centric processors, large batteries, and super-fast charging technology at affordable prices.