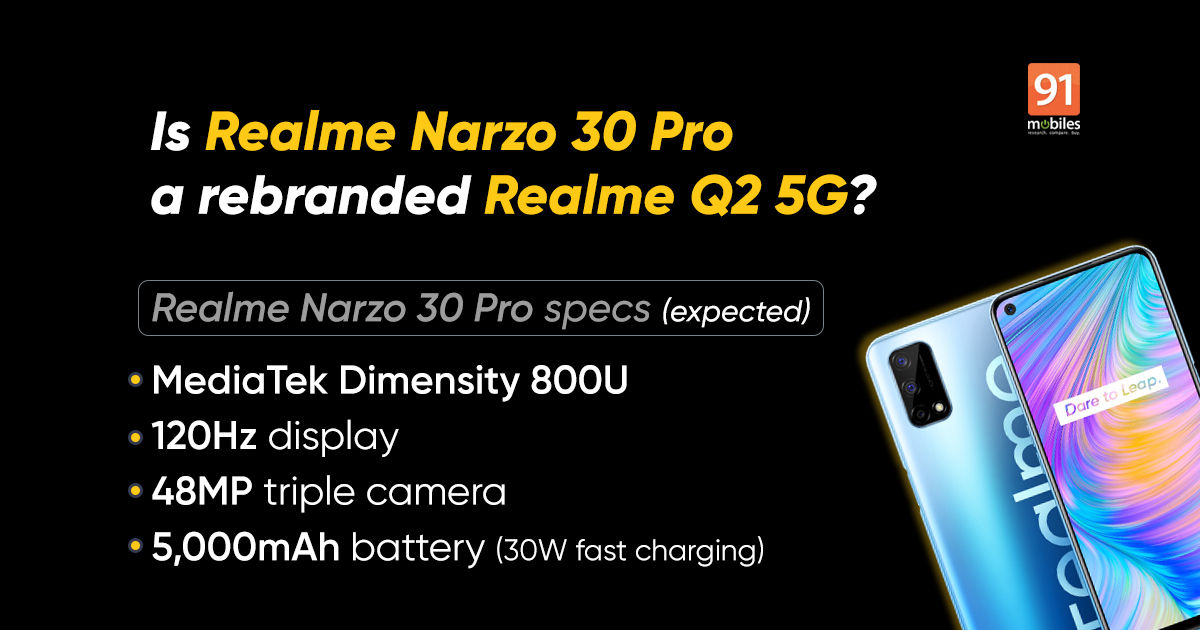 Realme Narzo 30 Pro 5G price in India will be revealed on February 24th and it is all set to become the cheapest 5G phone in India yet. Realme India CEO Madhav Sheth had already teased that the phone will be cheaper than the Realme X7 5G, which is priced at Rs 19,999. Ahead of the launch event, Realme Narzo 30 Pro 5G specifications were leaked by tipster Mukul Sharma. He revealed that the phone will come with the MediaTek Dimensity 800U SoC (which has been confirmed on Flipkart), 30W fast charging support, 48MP triple cameras, and more. In fact, the Realme Narzo 30 Pro 5G specs look identical to the Realme Q2 5G that was launched in China in October 2020.

To recall the Realme Q2 5G specifications and design, the smartphone comes with a 6.5-inch FHD+ LCD display with a 120Hz refresh rate and 180Hz touch sampling rate. The smartphone is powered by the MediaTek Dimensity 800U chipset paired with up to 6GB RAM and 128GB internal storage. Realme Q2 is equipped with a triple-camera system that comprises a 48MP primary camera, an 8MP wide-angle lens, and a 2MP macro lens.

The phone packs a 5,000mAh battery and supports 30W fast charging. As for the design, the Realme Q2 5G sports a corner punch-hole cutout on the front and a matt finish rear panel with the Realme branding across. The device comes in Silver and Blue colour options in China.

The Realme Narzo 30 Pro 5G is already confirmed to come with the MediaTek Dimensity 800U chipset. The same processor has been used on the Realme X7 in India and Realme Q2, Realme Q2 Pro, and Realme V15 in China. Flipkart has now also confirmed that the phone comes with a 120Hz FHD+ display. Tipster Mukul Sharma reveals that the smartphone will come with a 5,000mAh battery with 30W fast charging support, 48MP triple cameras, Dolby Atmos, and Hi-Res Audio.

These Narzo 30 Pro specifications are identical to the Realme Q2 5G’s specs, suggesting the two phones are similar. However, the design of the Narzo 30 Pro 5G seems to be slightly different. The teasers so far show a phone with a matt finish rear panel without the large Realme branding. Other than that, the phone looks similar to the Realme Q2 5G.