Home Comparisons Realme Narzo 30A vs POCO M3 vs Redmi 9 Power: benchmarks and... 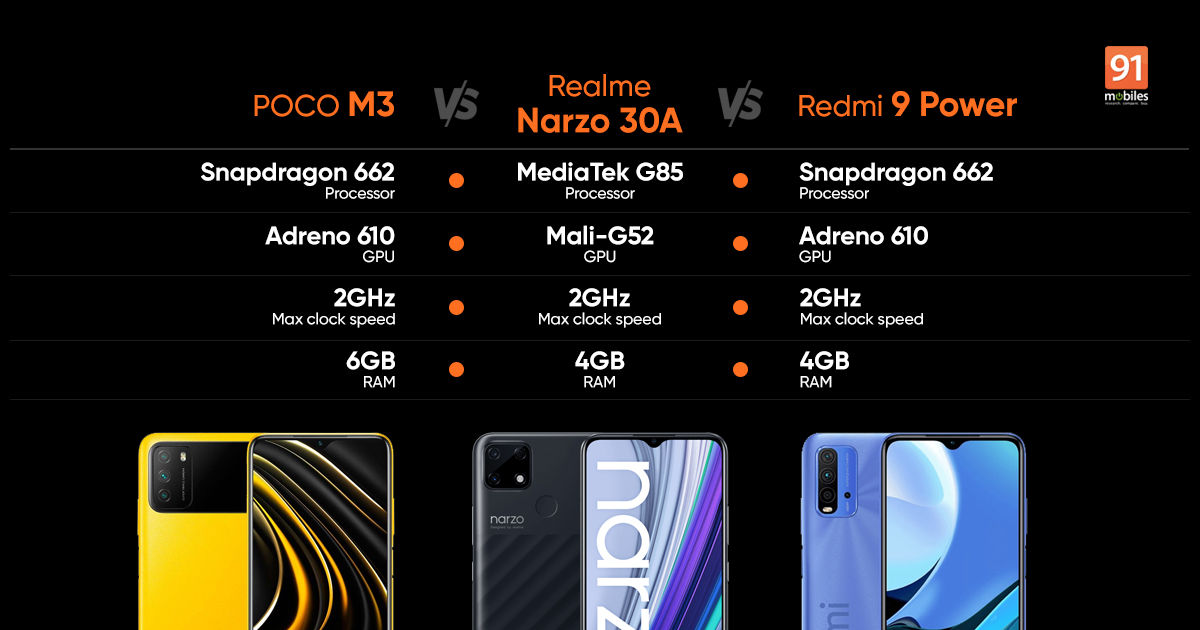 Realme has just announced two new entries into its Narzo lineup of smartphones which focuses on the affordable segment. The Narzo 30A comes with a starting price tag of Rs 8,999 while the more expensive Narzo 30 Pro is priced starting Rs 16,999. In this piece, I shall focus on the former of the two phones, specifically looking at how the Narzo 30A competes with its nearest rivals. It seems quite obvious to put a Redmi phone in contention so I have gone with the Redmi 9 Power (review) which is selling for Rs 10,499. Also included is the POCO M3 (review), another prime budget phone contender that’s priced similarly, with a price tag of Rs 10,999. When it comes to performance, both the M3 and 9 Power are packed with Qualcomm’s Snapdragon 662 chipset while the Narzo 30A uses MediaTek’s Helio G85. Also, there is a slight disparity in RAM with the Narzo 30A and Redmi 9 Power offering 4GB RAM while the POCO M3 gets 6GB RAM, as far as their base variants are concerned. 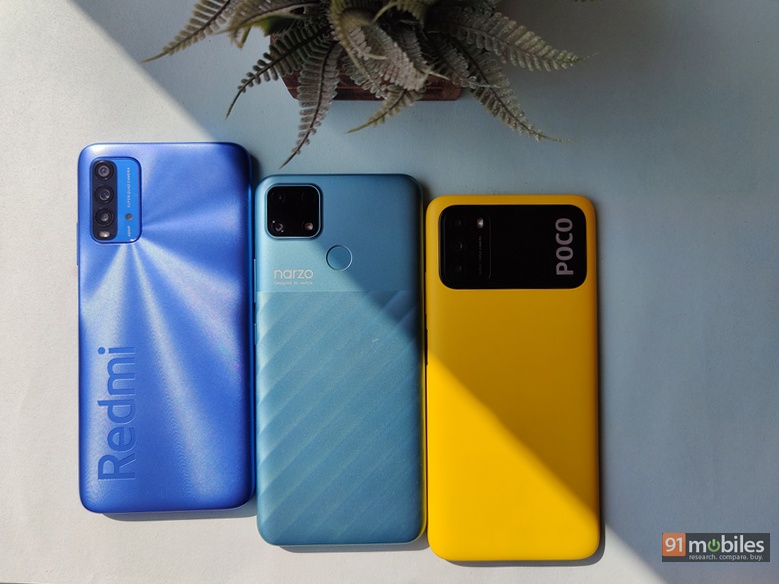 Talking a bit about the chipset, you get 11nm manufacturing process on the Snapdragon 662, which seems marginally better than the 12nm process that is used for the Helio G85. Apart from that, the 662 also has the advantage of using four performance Cortex A75 CPUs, while the G85 just has two A75 cores with the remaining six being efficiency Cortex A55 cores. However, the G85 packs in a better Mali-G52 GPU that has a 1GHz clock speed as compared to the Adreno 610 that clocks at 300MHz (or about 30 percent slower). Both these factors will play a significant role in the benchmarking tests that will run on the three devices.

While there is no sure-shot metric of the real-world day-to-day performance of smartphones, running benchmarks is a convenient way to get an idea. With several synthetic tests and benchmarks littered across the Play Store, for this comparison, I shall be using Geekbench 5, GFXBench, 3DMark, and Antutu which happen to be the most popular ones. Every test will stress the CPU or GPU performance and sometimes both. 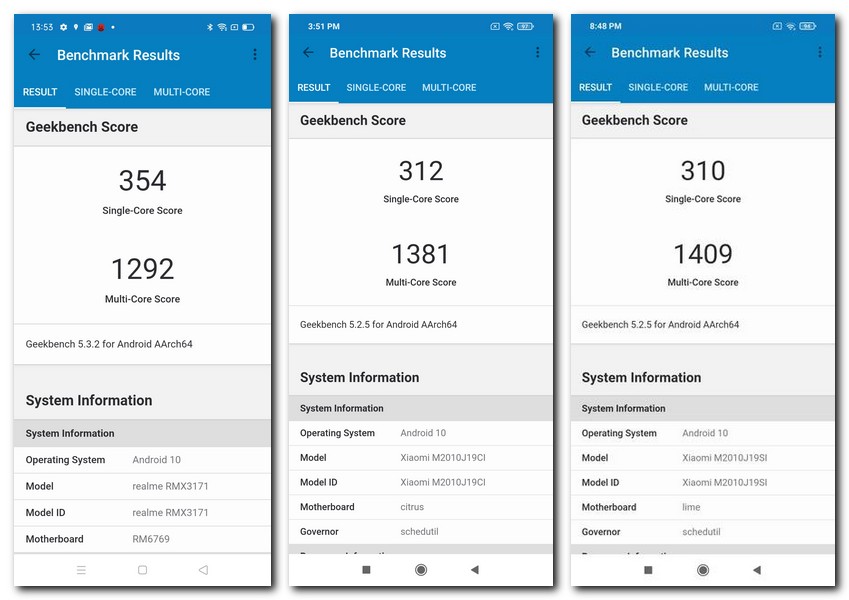 If you need to dedicatedly gauge the CPU performance of any smartphone, Geekbench 5 is perhaps your best bet. You get two sets of tests for multi-core and single-core performance. For the Realme Narzo 30A, the scores were 354 and 1,292 respectively while on the Redmi 9 Power you have scores of 310 and 1,409. Something similar is seen with the POCO M3, which got scores of 312 and 1,381. As expected, the multi-core performance on both the POCO M3 and Redmi 9 Power is superior to the Narzo 30A, but not by much. In comparison, the single-core performance looks marginally better on the Narzo 30A’s G85. The negligible difference in the scores of both the multi-core and single-core tests indicates that there will be parity in the processing capabilities of all three devices. 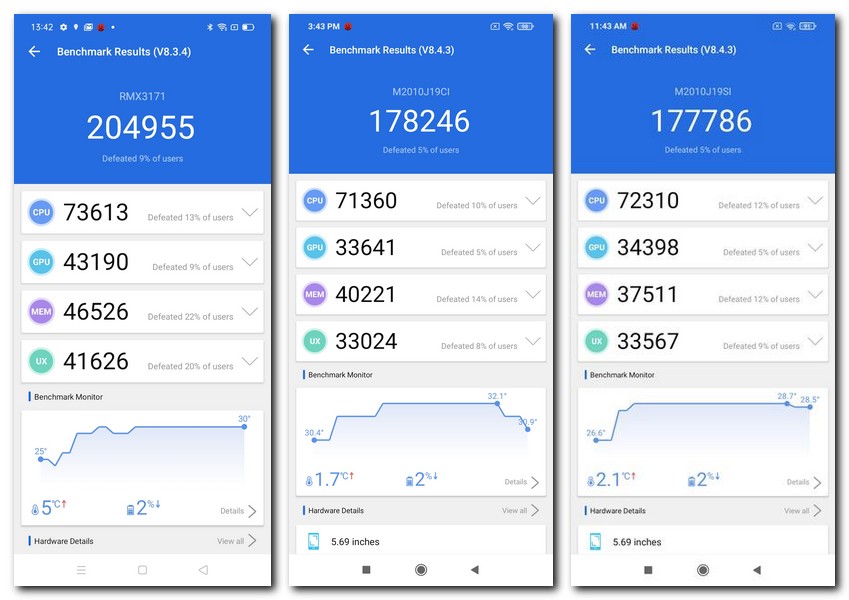 To have a more holistic approach to a device’s SoC, Antutu pushes the smartphone through several tests which strain the CPU, GPU, AI capabilities, memory speeds, and more. Based on this you get an overall score that will give you a pretty good idea of how well the device can perform in terms of processing and graphics capabilities. The Realme Narzo 30A’s overall score tallies up at 204,955 which puts it ahead of both the POCO M3’s 178,246 and Redmi 9 Power’s 177,786. A breakdown of the score shows us that the Narzo 30A benefits greatly from its GPU score of 43,418 which is nearly 25 percent higher than the other two. CPU scores are largely the same on all three phones, as expected. The Narzo 30A also pushes past the competition in both the memory and UX scores as well. 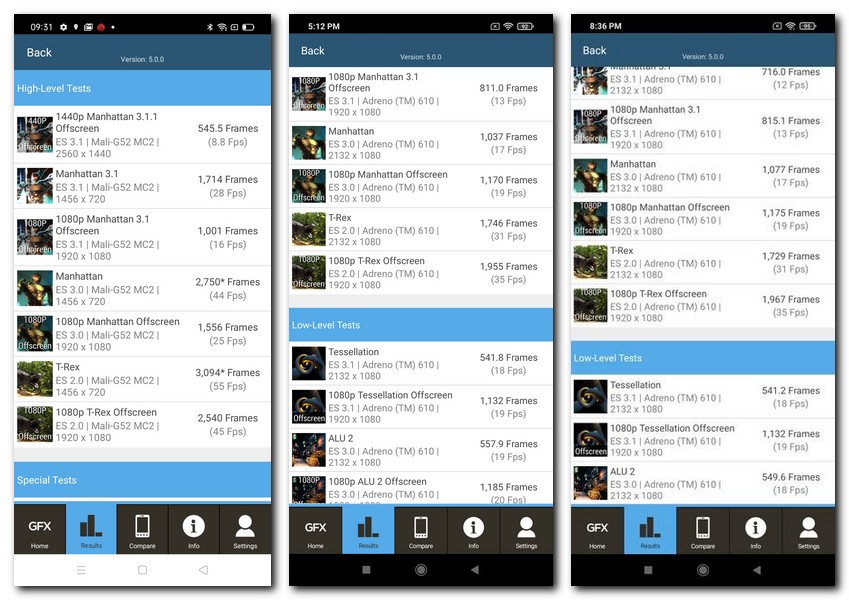 Both these benchmarks are basically stress tests for how well the chipset handles graphical load, and it does seem that this would favour the Narzo 30A given its GPU’s higher clock speeds. On GFXbench the score is provided by assessing how many frames on a test sequence can the phone push in a given time period. The Narzo 30A and its Mali-G52 GPU manage 44 and 55fps respectively on Manhattan and T-Rex tests. On both the Redmi 9 Power and POCO M3, the scores are much lower, logging 17 and 31fps respectively for Manhattan and T-Rez. It is becoming increasingly clear that the MediaTek G85 is the SoC to beat in terms of graphics handling, at least in the budget segment. Nevertheless, I had to get a second opinion, although my hopes of a turnaround were quite low. 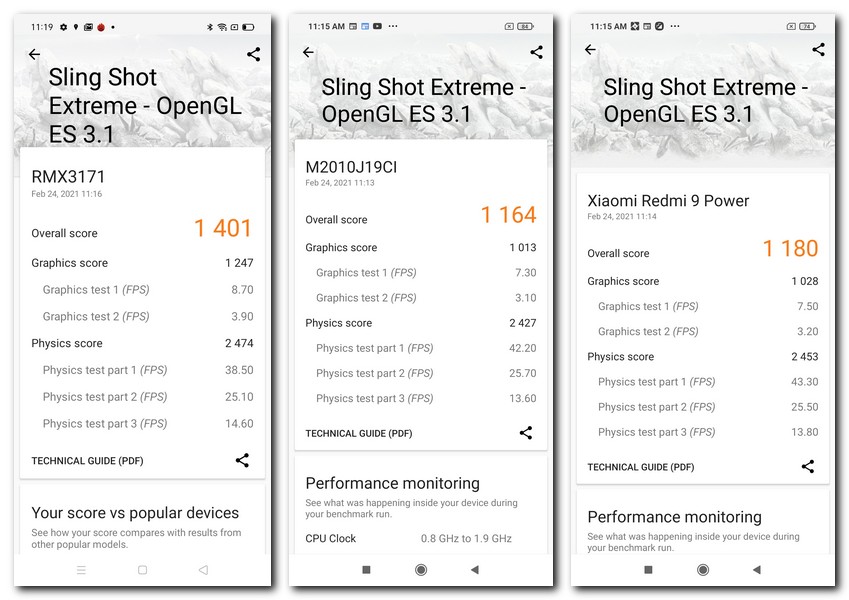 3DMark also puts the GPU through the wringer and Slingshot Extreme is one pf the most graphics-intensive tests out there. As the results came in, the gap did close between the three phones but the Narzo 30A still topped the chart. With scores of 1,180 and 1,164 respectively, the Redmi 9 Power and POCO M3 fall about 15 percent below the 30A’s score of 1,401. Again we do notice that while the graphics score is considerably higher on the Narzo 30A, the Physics score, which gauges CPU capability, is the same across all three devices.

The Narzo 30A has dominated most of the tests that involve any kind of graphics activity and fared nearly the same during CPU tasks. It also appears that the extra 2GB RAM on the POCO M3 has not been as effective as I first thought it would be, with scores remaining nearly identical to the 4GB Redmi 9 Power.

Budget phones will not be my first choice for any heavy-duty mobile gaming unless monetary constraints are put in place. Anything like an Angry Birds or Subway Surfer will run without any kind of problem since it doesn’t put stress on the GPU. However, titles that have to render a virtual world in real-time, will test the graphical expertise of the chipset well. As such, it seems the ban on PUBG Mobile has left us with Call of Duty Mobile (CoDM) as the next best option. If the benchmarking tests are anything to go by, then the Narzo 30A should have easy sailing in the gaming tests as well.

A good measure of how CoDM can run on a smartphone is by checking what graphics settings it supports, mainly in terms of the Graphics Quality (GQ) and Frame Rate (FR) options permissible. In the case of the Realme phones, there has been a disparity in recent times between the GQ and FR options available and what the in-game experience offers. I have had a similar experience on the Narzo 20 and the Realme X7 earlier. For the Narzo 30A, I got a maximum of Medium GQ and High FR, both of which are options present on much lower-grade chipsets. However, when playing the game, I got a smooth 45fps maintained constantly with textures, shadows, and details consistent with Very High GQ. The POCO M3 and Redmi 9 Power can both run the game at Very High GQ and with High FR. 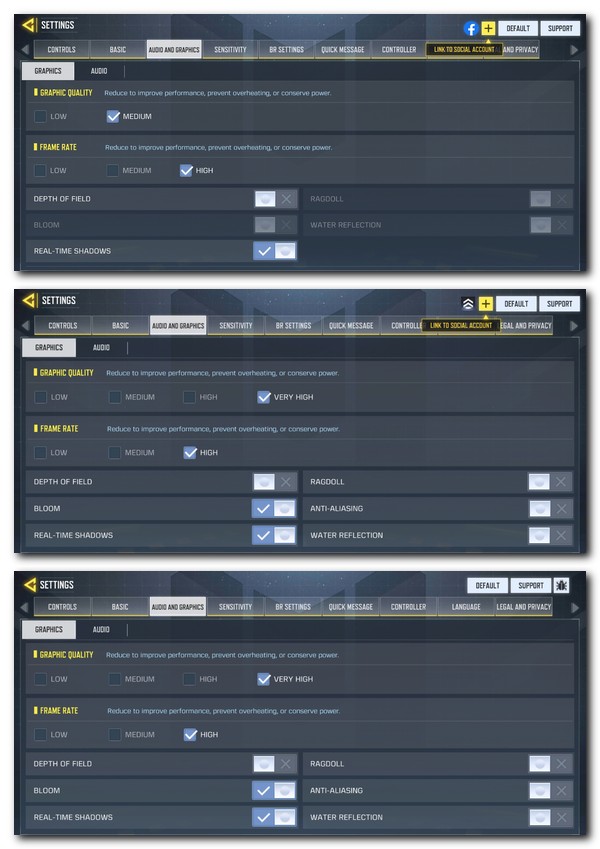 A 30-minute gaming session shows the extent of the rise in temperature, as well as the battery drain. Fortunately for us, all three phones happen to have the exact same 6,000mAh battery capacity. Starting the gaming session with all phones charged at 100 percent, the Narzo 30A dropped about 11 percent while the temperature gained was 12 degrees after 30 minutes. The Redmi 9 Power dropped 14 percent battery and also gained 15 degrees, while the POCO M3 lost 10 percent battery but the temperature gain was 14 degrees. It does become increasingly clear that the Narzo 30A is the best choice for gaming on a budget among the three contenders.

The Realme Narzo 30A is a winner by a very sizeable margin as far as GPU-related tasks are concerned and that is quite evident from the various benchmarking and gaming tests. Normal day-to-day processing tasks do show a slightly lower score for the Narzo 30A on benchmarks, but in real-world usage, there will be no difference. The Narzo 30A and Redmi 9 Power come with 4GB RAM in their starting variants while the POCO M3 offers 6GB. This should help the M3 keep more apps running in the background, but that’s about it. If you are looking for a good overall performance experience, the Narzo 30A seems to be the ideal option.