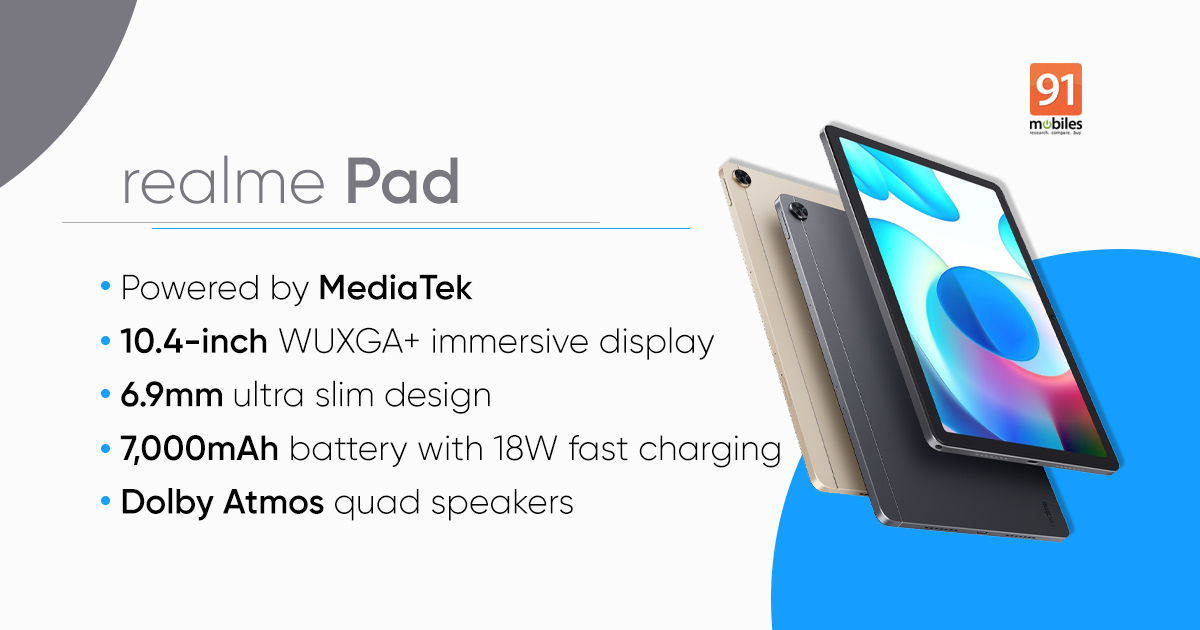 The realme Pad heralds a new era for the company’s journey in India. This new tablet looks like an excellent device for anyone wanting a large screen estate for satisfying their work or entertainment needs. Along with a huge display, it also brings powerful internals that is spearheaded by the MediaTek Helio G80 chipset. The gaming-focused SoC has proven its brawn time and again on successful devices, and here it is once again, powering a tablet experience that’s hard to pass up. Here’s an overview of all things that make the realme Pad a great choice.

A tablet’s display needs to be good for it to be successful, and the realme Pad has got it right with the 10.4-inch panel that’s adorning its front surface. It grabs a WUXGA+ resolution of 2000 x 1200, meaning it sits between FHD and 2K resolution. The display is crisp and beautiful and perfect for streaming your favourite movies, playing games, and reading books. Thanks to the slim bezels, you will get an immersive experience that is hard to beat in this price range. The tablet also looks good thanks to its premium colour finish and boxy industrial design. We also love the ultra-slim design of this tablet. Coming at just 6.9mm, the tablet weighs only 440g, allowing you to hold it for a long time without tiring your hands.

The performance unit at the heart of the realme Pad gives it more than enough power to render heavy apps, animations, and games without any hiccups. The MediaTek Helio G80 hosts two ARM Cortex-A75 cores clocked at 2GHz and six ARM Cortex-A55 cores clocked at 1.8GHz. The performance of this octa-core cluster is boosted by the fact that it’s interlinked and paired with a large L3 cache. The MediaTek Helio G80 chip makes the realme Pad a great choice for gamers. Its Mali-G52 MC2 GPU can deliver crisp visuals and stable frame rates while playing games. This kind of hardware makes the realme Pad an ideal companion for those who desire quality performance from their devices.

The realme Pad’s incorporation of the MediaTek Helio G80 SoC also means it comes equipped with the MediaTek HyperEngine Game technology. It has an intelligent resource management engine that facilitates sustained performance and longer gameplay with dynamic management of CPU, GPU, and memory. And it does in accordance to active measurements of power, thermal, and gameplay factors, leading to truly optimised performance. The technology also includes connectivity enhancements that predict Wi-Fi and LTE concurrency triggers in just 13 milliseconds. Moreover, it also allows you to defer calls while gaming without dropping the data connection.

Underneath the attractive shell of this tablet is a 7,100mAh battery that also supports 18W fast charging. That’s a lot of power, and it means that the tablet will be good to keep going an entire day on a single charge. It can last up to 12 hours of continuous video playback and offers 65 days standby time. What cannot be ignored is the contribution of the MediaTek chipset to this tablet’s battery life. It reduces power consumption via various optimisations and efficient hardware.

realme Pad comes with several features and enhancements that make it a perfect device for making video calls and watching content. The 8MP camera with a 105° field of view at the front is supported by a dual-mic system that comes with a noise cancellation feature. This setup helps in delivering a clear video and voice experience when making video conferences. We also love the Dolby Atmos quad speakers that come with the Adaptive Surround Sound feature, thus letting you watch content in stereo no matter how you hold it.