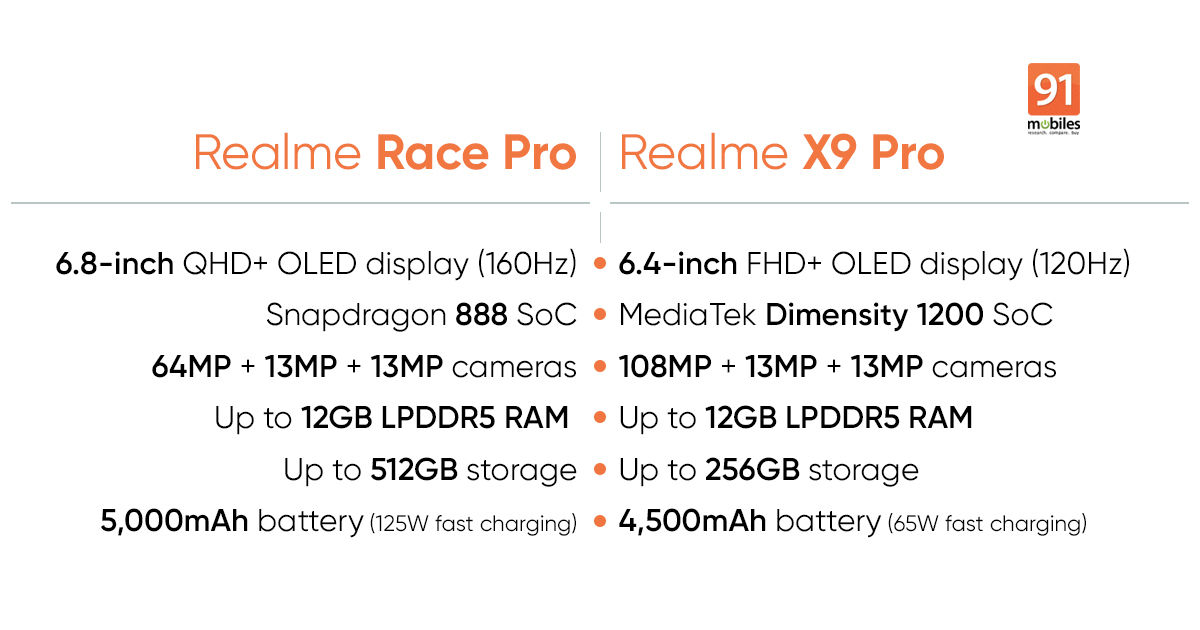 Starting with the Realme Race Pro specifications, it is tipped to sport a 6.8-inch Quad HD+ OLED display with 3,200 X 1,440 pixels resolution, 160Hz refresh rate, and 20:9 aspect ratio. It is powered by the Qualcomm Snapdragon 888 SoC paired with Adreno 660 GPU, up to 12GB LPDDR5 RAM, and 128GB/ 256GB/ 5126GB storage options. A 5,000mAh battery with 125W fast-charging support will fuel the flagship. Moving to cameras, the Realme Race Pro has triple-cameras at the back with a 64MP primary sensor and a couple of 13MP lenses. The phone boots Android 11-based Realme UI 2.0 custom skin.

As for the Realme X9 Pro specifications, it is claimed to include a 6.4-inch FHD+ OLED display with 2,400 X 1,080 pixels resolution, 20:9 aspect ratio, and 120Hz refresh rate. The smartphone will be reportedly powered by the MediaTek Dimensity 1200 SoC paired with up to 12GB RAM and 128GB/ 256GB storage options. The phone runs on Android 11 OS with Realme UI 2.0 custom skin on top. Moving to cameras, the Realme X9 Pro has a large 108MP primary camera and two 13MP sensors. The phone packs a 4,500mAh battery with 65W fast-charging support.

Since these are early Realme Race Pro and X9 Pro specifications, there’s always a possibility of minor last-minute changes. With the specifications of the two phones out in the open, it’s only a matter of time before their respective prices too leak out, so stay tuned.