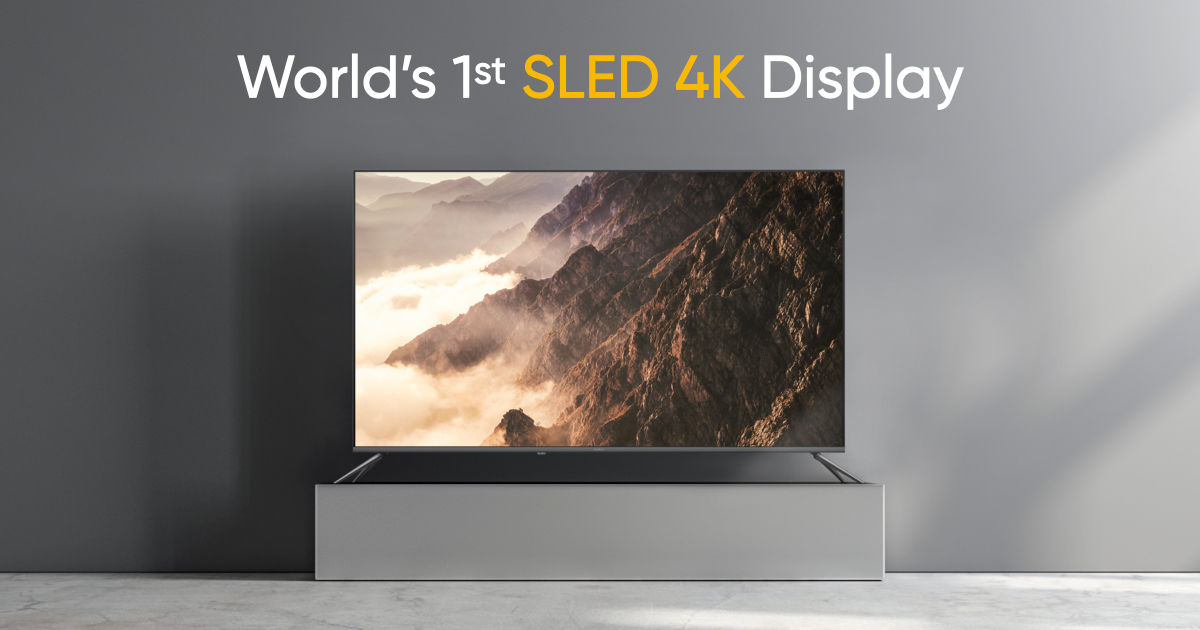 Realme smart TV SLED 4K has been launched in India alongside a host of new products, including the Realme 7i, Buds Air Pro, and others. This is Realme’s flagship smart TV that comes with a 55-inch screen. Notably, it is the world’s first TV to use a SLED screen technology that the company has co-developed with John Rooymans, chief scientist of SPD Technology (Spectral Power Distribution). The Realme smart TV SLED 4K comes with a bezel-less metal body design, 94.6 percent screen-to-body ratio, and Android TV 9.0 platform, among other things.

Realme smart TV SLED 4K 55-inch price in India is set at Rs 42,999 but it will be available at a special price of Rs 39,999 during the first sale. Pre-booking will start on October 16th at midnight and the TV will be available through Flipkart, Realme.com as well as offline retail stores soon. The company promises free installation and TV Wall Mount as well.

Realme’s flagship 4K TV sports a 55-inch SLED display with 9.5mm thin bezels, 300 nits brightness, and 94.6 screen-to-body ratio. The TV comes with a premium metal frame and stands. The SLED display aims to offer stunning visuals and uses a white backlight made up of RGB LEDs to deliver a wider color gamut. The display also supports the Chroma Boost picture engine to enhance colours and the TV packs 24W quad stereo speakers with Dolby Atmos support, which are bigger than the ones used on the 32-inch and 43-inch models. The TV has support for Chromecast built-in, HDR, and HDR10+. The remote control has shortcuts for Netflix, YouTube, Prime Video, and Google Assistant button for hands-free voice control.

Realme is providing metal stands and wall-mount within the box and is also offering free installation as well. The TV is powered by a quad-core MediaTek chipset and runs on Android 9.0 platforms with support for over 5000+ apps, including popular OTT apps like Disney+ Hotstar, Zee5, Netflix, among others. Connectivity features include 2.4GHz and 5GHz Wi-Fi, Bluetooth 5.0, HDMI ports (including ARC), and USB ports.

Realme has also announced a standalone 100W soundbar that will be sold separately. The soundbar is equipped with 60W full-range speakers and a 40W Subwoofer with Bluetooth 5.0 support.