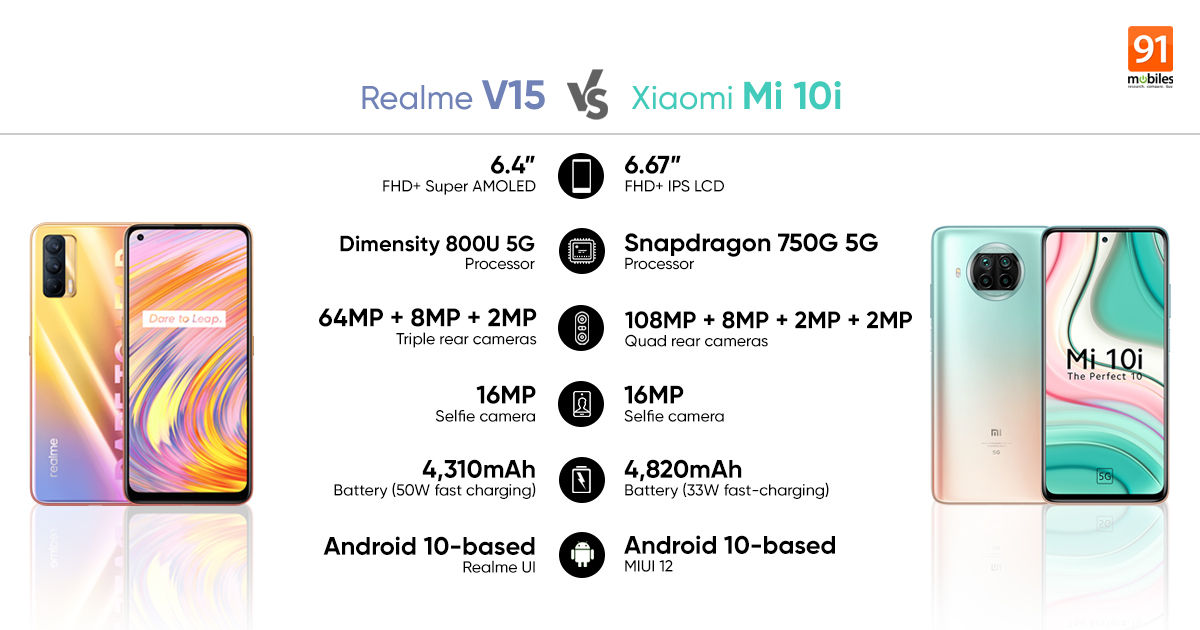 The Realme V15 5G launched in China earlier this week, sporting a triple camera setup, a Super AMOLED display, and other mid-range features. The phone has already been certified by Indian BIS, which means that the Realme V15 India launch is on the horizon. This is a mid-range smartphone that uses MediaTek’s Dimensity chipset to provide good performance and 5G connectivity. The device also touts super-fast 50W fast-charge technology that can refill the battery in no time. When it launches in India, Realme V15 will bring tough competition to Xiaomi’s recently launched Mi 10i smartphone. Both smartphones should be in a similar price bracket, so we thought it’d be a great idea to compare the two. Let’s find out how the Realme V15 price, specifications, and design fare against the Xiaomi Mi 10i 5G.

Realme V15 vs Xiaomi Mi 10i price in India

In terms of design, both devices have back panels that can turn heads. The smartphones feature punch-hole display and offer thin bezels that give it a premium look. The cutout for the front camera is placed on the left corner of the Realme phone. On the Xiaomi Mi 10i, you get a central punch-hole cutout. The Realme V15 uses a rectangular shaped rear camera module, whereas the Mi 10i goes for the circular look. If you want a flashier phone with a reflective back panel, then we’d suggest the Realme V15. The Xiaomi Mi 10i has a dual-tone matte finish back panel that looks a little more classier.

Coming to the specifications of these devices, you can expect good performance from both. The Realme V15 specifications include MediaTek’s octa-core Dimensity 800U chipset with 5G. This is paired with up to 8GB RAM and 128GB of internal storage. The phone gets a 6.4-inch Super AMOLED display that offers 600nits brightness and 180Hz touch sampling rate. There’s no 90/120Hz refresh rate here, which is where the Xiaomi Mi 10i shines thanks to its 6.67-inch FHD+ LCD panel that offers HDR10+ support and AdaptiveSync 30 to 120Hz variable refresh rate. The Mi 10i also offers up to 8GB RAM and 128GB storage.

Cameras are another area where the Xiaomi Mi 10i offers more, at least in numbers. The phone features a 108MP + 8MP + 2MP + 2MP quad-rear camera setup and a 16MP selfie sensor. Meanwhile, the Realme V15 gets a triple rear camera setup that consists of a main 64MP sensor, an 8MP wide-angle lens, and a 2MP macro camera, while a 16MP lens does duty for selfies. In terms of batteries, the Mi 10i houses a 4,820mAh battery with 33W fast charging, whereas the Realme V15 has a smaller 4,310mAh battery, but with super-fast 50W charging support.

In conclusion, the Xiaomi Mi 10i 5G offers more features when compared to the Realme V15, but at a slightly higher price tag. Of course, this depends on the Realme V15 India pricing being lower than the Mi 10i. Overall, both smartphones offer good features, with the Realme V15 using an in-display fingerprint scanner over Mi 10i’s side-mounted fingerprint sensor. Both devices also come with powerful cameras and fast charging batteries, but you do get a higher refresh rate screen on the Xiaomi phone. If the better screen, higher resolution rear camera and a Snapdragon chipset is more important, then the Mi 10i 5G is what you should get. If not, the Realme V15 is an excellent 5G mid-range phone on paper.