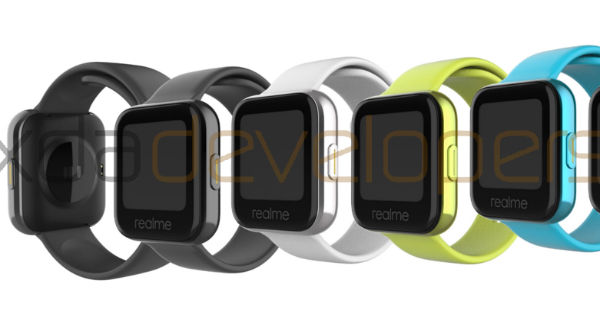 Realme Watch is expected to be the brand’s first-ever smartwatch, and it is expected to launch in India soon after the lockdown ends. Realme has forayed into the wearable segment with the Realme Buds Air truly wireless earbuds and the Realme Band fitness tracker. The brans has already teased the upcoming Realme Watch in an ‘Ask Madhav’ Q&A video on YouTube. Now, the Realme Watch design has been leaked courtesy a render on XDA-Developers. The smartwatch has a square-shaped body and silicone straps that will come in at least four colour options. The report also provides screenshots of the Realme Watch UI features and watch faces.

As per the render, the Realme smartwatch has a square display with rounded corners and thick bezels on all corners. The Realme branding is present on the bottom bezel and there is a single button on the right spine which can be used to lock and unlock the device and for other functions. The charging pins are visible at the back, which appears to be hard polycarbonate back cover plate. It is likely to use a magnetic charger. The Realme smartwatch is said to flaunt a 1.4-inch TFT LCD touchscreen display with 320 X 320 pixels resolution. It will reportedly house a 160mAh battery to deliver a seven-day battery life (with 24-hour heart rate monitoring).