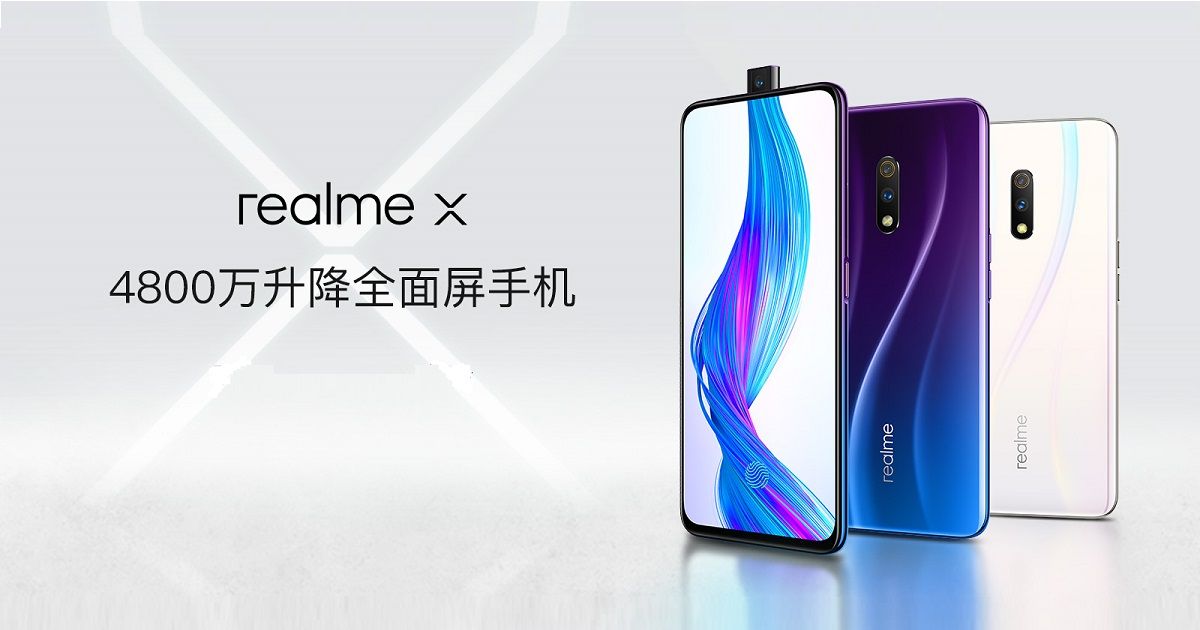 After a barrage of leaks and rumours, Realme has announced its first smartphones in China, namely the Realme X and Realme X Lite. Sticking to the brand’s affordable roots, the former offers some great features for the price, including a bezel- and notch-less display, AMOLED panel, in-display fingerprint sensor, pop-up selfie camera, dual rear cameras with a 48-megapixel main sensor, Qualcomm’s Snapdragon 700 series chipset, and a premium-looking design with gradient finish. As for the Realme X Lite smartphone, it is the rebranded version of Realme 3 Pro (review) for the Chinese market.

Both Realme X and X Lite smartphones will be available for sale in the country starting May 20th. There is no information about the India availability of the Realme X smartphone as of now, though the company has said it will be coming to the Indian market.

As for the specifications, the Realme X ships with a 6.5-inch AMOLED display that bears full-HD+ (1,080 x 2,340p) resolution, 91.2 percent screen-to-body ratio, and Corning Gorilla Glass 5 protection on top. The panel also houses a sixth-generation optical scanner for biometric unlock and there is no cut-out on the display whatsoever. The front camera is hidden and pops up from the middle of the top edge when required. At its heart lies the Snapdragon 710 chipset paired with HyperBoost 2.0, 6GB/ 8GB of RAM and 64GB/ 128GB in-built storage, which is user expandable via microSD card.

For photography, the Realme X sports a 48-megapixel Sony IMX 586 primary sensor (f/1.7) and a 5-megapixel secondary depth unit for portrait shots at the back. The pop-up selfie camera features a 16-megapixel IMX471 shooter with f/2.0 aperture lens. The cameras are backed by AI to detect 16 types of scenes and features such as HDR and slow-mo video recording at 960fps. The phone comes preloaded with Android 9.0 Pie-based ColorOS 6.0 to take care of the software side of things. A 3,765mAh battery with OPPO’s VOOC 3.0 fast charge support fuels the Realme X smartphone. The handset’s speakers are fine-tuned Dolby Atmos.

The Realme X Lite, on the other hand, packs a 6.3-inch full-HD+ waterdrop notch display and a whopping 4,045mAh battery with VOOC fast charging support. The handset is powered by Qualcomm Snapdragon 710 chipset paired with HyperBoost 2.0 technology to boost its performance. The phonemaker ships the handset in three configurations: 4GB + 64GB, 6GB + 128GB, and 6GB + 128GB. In optics, the phone rocks a 16-megapixel + 5-megapixel sensors on the rear and 25-megapixel shooter on the front for selfies and video calling. The Realme X boots ColorOS 6.0 atop the Android 9 Pie OS out of the box. A rear-mounted fingerprint sensor rounds up the specs sheet of the handset.