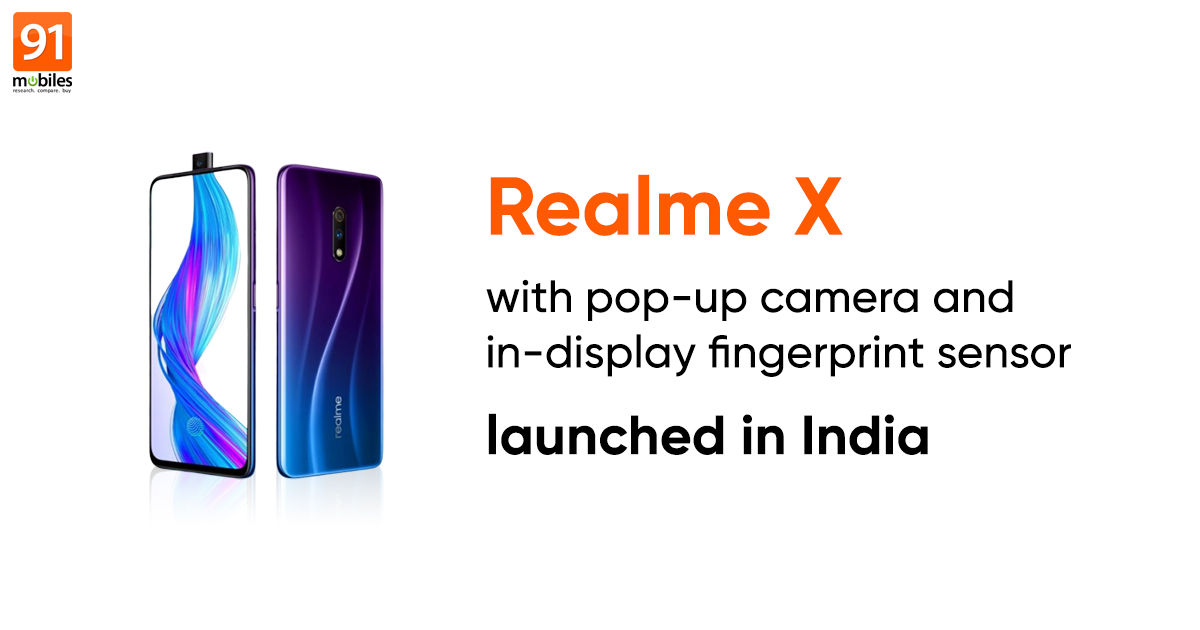 Realme X has been launched in India, ending the months-long wait of fans. Apart from the standard model, the company also unveiled the Spider-Man: Far From Home gift box as well as the Realme X Onion and Garlic editions of the smartphone in the country. The handset is the brand’s first model with a pop-up selfie camera, full-screen display, and 48MP primary rear camera. To recall, the company had already opened up the pre-orders of the handset in India, but only offered 2,000 units of the standard model and 300 units of the Spider-Man edition in the early sale. And, of course, the launch event saw the company announcing the Realme X price in India and availability details. At the same event, the Realme 3i budget smartphones was launched as well.

The Realme X price in India has been set at Rs 16,999 for the base variant that has 4GB of RAM and 128GB of storage. The other option comes with 8GB RAM and 128GB storage, priced at Rs 19,999. The handset comes in Polar White and Space Blue colour variants. The Realme X first sale is scheduled for 8pm on July 18th as part of the Hate to Wait sale on Flipkart, while the first official sale will be on July 17th at 12pm on Flipkart and Realme.com. The handset will be available via offline stores starting August, the company said. The Spider-Man: Far From Home gift box has been priced at Rs 20,999, while the Onion and Garlic Master Editions each cost Rs 19,999.

The Realme X comes with a 6.53-inch bezel-less display with full HD+ resolution and a screen-to-body ratio of 91.2 percent. The smartphone is powered by a Qualcomm Snapdragon 710 processor, aided by up to 8GB of RAM and 128GB of storage. Software-wise, you get ColorOS 6.0, which is based on Android Pie. For security, the handset has been equipped with an under-display fingerprint scanner.

Talking about cameras, the Realme X specifications include a 48MP Sony IMX586 primary snapper at the rear, aided by a 5MP secondary shooter. For selfies, there’s a 16MP camera that comes out of the top in the middle whenever required. The connectivity options include 4G LTE, dual-SIM slots, Wi-Fi, Bluetooth 5.0, and A-GPS. A 3,765mAh battery with fast charging support keeps the whole package alive.

The Spider-Man: Far From Home edition model comes with 8GB RAM, 128GB storage, Polar White colour, and custom theme based on the Marvel superhero. It will come in a special box, which includes a Spider-Man-themed case. As for the Onion and Garlic editions, the two variants have designs inspired by onions and garlic, respectively. The designs have been created in partnership with Japanese designer Naoto Fukasawa. These also come in 8GB + 128GB configuration.