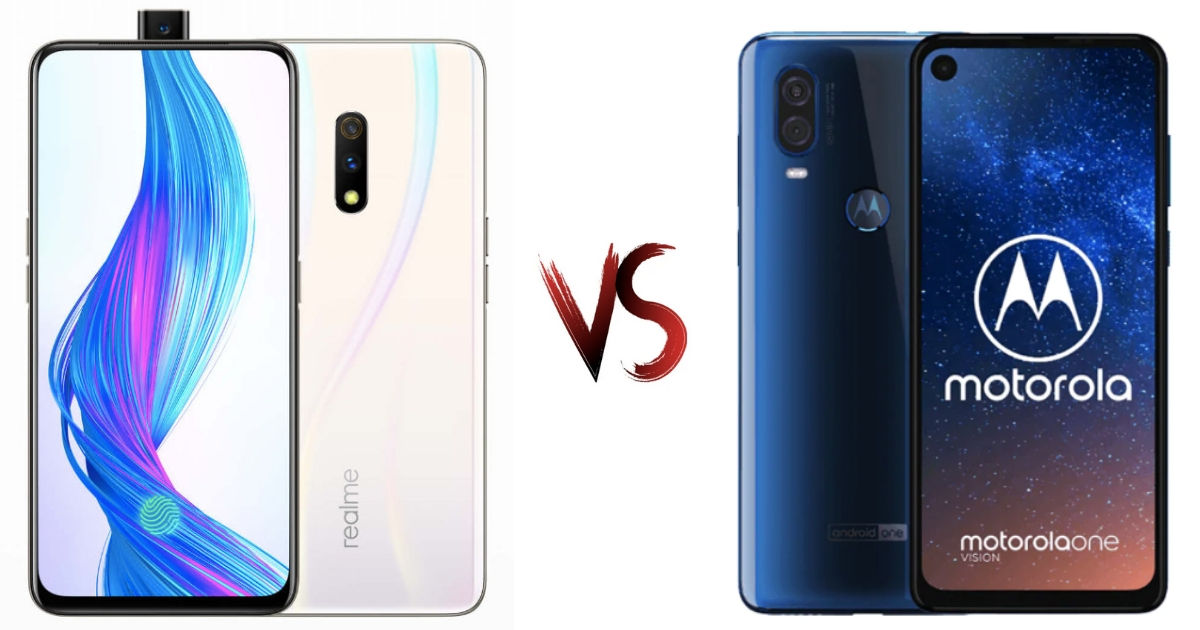 Realme’s latest mid-range smartphone, the Realme X, features a Snapdragon 710 chipset, a pop-up selfie camera, and a 48-megapixel rear facing camera. On paper, the Realme X is a really good budget smartphone that offers features normally found on more expensive devices. And it has been confirmed to launch in India soon. It may, however, face competition from the newly-unveiled Motorola One Vision, which was spotted on the BIS website recently and, thus, likely to launch in India soon as well. In this post, we are going to be comparing the Realme X specifications and price with those of Motorola One Vision smartphone to help you decide which model is worth waiting for.

Now, let’s talk design and specifications. As mentioned earlier, the specifications of both these phones are quite similar. The same cannot be said for the design. The Realme X features an all-screen design with no notch and slim bezels and offers 91.2 percent screen-to-body ratio. It comes with an in-display fingerprint scanner as well. Realme has opted for a pop-up selfie camera to get the full screen design on the front. On the other hand, the Motorola One Vision has a punch-hole display with the camera hole on the top left corner. There’s a fingerprint scanner placed at the back of the device.

The Realme X comes with a 6.5-inch AMOLED display with full-HD+ resolution and Gorilla Glass 5 protection. Compared to this, the Motorola One Vision features a 6.3-inch FHD+ LCD display. The Motorola device has a slightly thicker chin compared to its competitor.

Coming to hardware, we shall start with the Motorola One Vision, which is powered by an Exynos 9609 chipset and gets up to 4GB RAM and 128GB of storage. Compared to that, the Realme X gets the Snapdragon 710 processor and up to 8GB RAM and 128GB storage. The Realme X offers more for less money. Both phones do offer a microSD card slot, allowing for storage expansion.

In the camera department, the Realme X features a 16-megapixel pop-up camera up front. At the back, there’s a primary 48-megapixel Sony IMX586 sensor, which is paired with a 5-megapixel depth sensor. The cameras offer features such as 960 fps slow motion video recording and HDR with AI scene detection. Motorola’s One Vision also gets a similar camera setup at the back, with a 48-megapixel camera that’s coupled with a 5-megapixel depth sensor. For selfies, the Motorola phone gets a higher resolution 25-megapixel camera.

Coming to the software and battery, the Realme X features a 3,765mAh cell that supports VOOC 3.0 fast charging. It runs ColorOS 6.0, which is based on Android 9.0 Pie. The phone also features Dolby Atmos software enhancements to improve the audio experience on the speakers. The Motorola handset is an Android One device and runs stock Android 9.0 Pie software. It features a 3,500mAh battery, which gets Motorola’s TurboCharge support for fast charging.

Those looking for a phone without a notch of any sorts, that also doesn’t cost a lot, should definitely look at the Realme X. It offers a better processor, more RAM, slightly bigger battery, and a pop-up selfie camera. However, if you prefer the Motorola brand over Realme, then the One Vision offers pretty much the same hardware. In terms of pricing, the former is the clear winner as it offers more for less. However, we will have to wait for an India launch to see how much they actually end up costing the buyer.