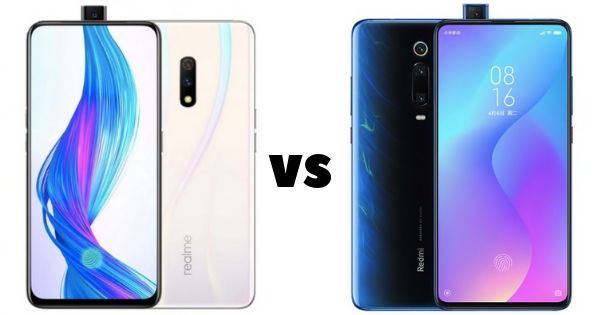 The Realme X India launch date has finally been revealed officially – Realme says it will launch its first pop-up camera phone in the country on July 15th. Apart from the pop-up selfie camera module, the new Realme X is the first handset from the brand to feature an in-display fingerprint sensor. It is a mid-range smartphone and aims to compete with the likes of the Redmi K20. Both these phones are similarly priced as well. Therefore, in this post, we are going to take a look at the differences in Realme X price and specifications with those of Redmi K20. Let’s get started!

The Realme X price starts at RMB 1,499 for the base variant with 4GB RAM And 64GB storage in China. If you want the 6GB RAM variant, that will cost you RMB 1,599. The top of the line 8GB RAM and 128GB storage variant is priced at RMB 1,799. The phone is available in Steam White and Punk Blue colour options, but there are special editions called the Realme X Onion Master and Realme X Garlic Master, which are priced at RMB 1,899.

On the other hand, the Redmi K20 price in China is higher than that of the Realme device. It starts at RMB 1,999 for the variant with 6GB RAM and 64GB storage. For the option with 8GB RAM and 128GB storage, you will have to pay RMB 2,099. However, you are getting more for the price. Let’s take a look at the differences between these phones in terms of hardware and design.

The Realme X specs are similar to  Redmi K20 specs, but there are a few differences, especially in the camera department. Both the phones have similar design, but can be distinguished by the back panel. The Redmi K20 features a full glass body, whereas the Realme X features a plastic panel at the back. They both look gorgeous in their respective colours, but we think the design of the Redmi K20 is a little more premium thanks to the glass. Both the phones feature a pop-up selfie camera and full-screen bezel-less displays.

The display of the Realme smartphone is slightly bigger at 6.53-inches, compared to the 6.39-inch panel on the Redmi K20. Both phones use AMOLED panels with full HD+ resolution and include an in-display fingerprint scanner. When it comes to hardware, the Redmi K20 specifications are slightly better than the Realme X specifications. For example, the Redmi K20 is powered by the Snapdragon 730 chipset, while the Realme device uses the Snapdragon 710 processor. Therefore, the performance of the Redmi device should be better in gaming and multi-tasking.

Now, let’s get the batteries and software. The Redmi K20 has a larger 4,000mAh unit, compared to the Realme’s 3,765mAh cell. However, the Realme phone supports 20W fast charging, whereas the Redmi only supports up to 18W. Both phones come with a 3.5mm headphone jack, Bluetooth 5.0, USB Type-C port, and dual-SIM support. They also run Android 9.0 Pie out of the box, with their respective custom UIs on top.

If you like using an ultra-wide camera and want slightly better performance when it comes to gaming and battery life, then go for the Redmi K20. It is a little more expensive than the Realme X, but you do get what you pay for.