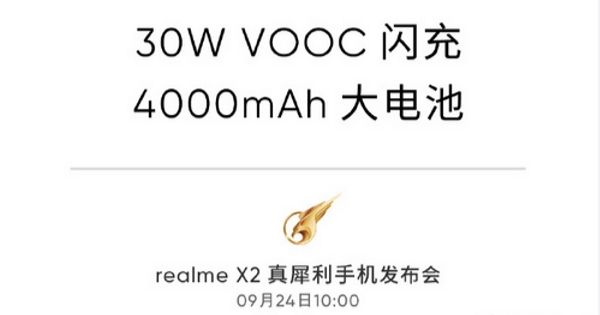 Realme X2 will come with a 4,000mAh battery, the company has confirmed. The device will support 30W VOOC Flash Charge 4.0, which is said to provide 67 percent charge in just 30 minutes. Over the past few weeks, the Chinese manufacturer has been sharing teasers of the upcoming mid-range smartphone and has confirmed a few specifications. For example, the Realme X2 will feature a 64-megapixel rear camera, along with a bunch of other sensors. The phone is going to be powered by the Snapdragon 730G chipset and will have a 32-megapixel selfie camera.

Realme recently unveiled the Realme XT in India, which is the Indian variant of the Realme X2, but it doesn’t feature the Snapdragon 730G SoC. The XT comes with a Snapdragon 712 chipset, which is sad since the China variant is getting a much powerful processor. The Realme X2 will be unveiled in China on September 24th. Now, the company did announce that it will launch a Realme XT with 730G chipset in December, but Indian buyers will feel the sting as China is getting the upgrade next week.

The company posted a new teaser on Weibo revealing that the Realme X2 will support 30W VOOC Flash Charge 4.0. This is another blow to the Realme XT customers, who are only receiving 20W VOOC Flash Charge 3.0 support. According to Realme, the new 30W fast charging tech will charge the 4,000mAh battery from 0 to 67 percent in about 30 minutes. Apart from those two changes, the Realme X2 is pretty much the same as the XT.

It will have a 6.4-inch AMOLED display with a waterdrop notch that will house a 32-megapixel selfie camera. The Realme XT comes with a 16-megapixel selfie unit. On the back, the X2 will feature a quad-camera setup with a primary 64-megapixel Samsung GW1 Bright sensor. This should be accompanied with an 8-megapixel ultra-wide sensor, a 2-megapixel depth sensor, and another 2-megapixel macro sensor. We should know more about the phone in the next couple of days when it is officially launched in China.