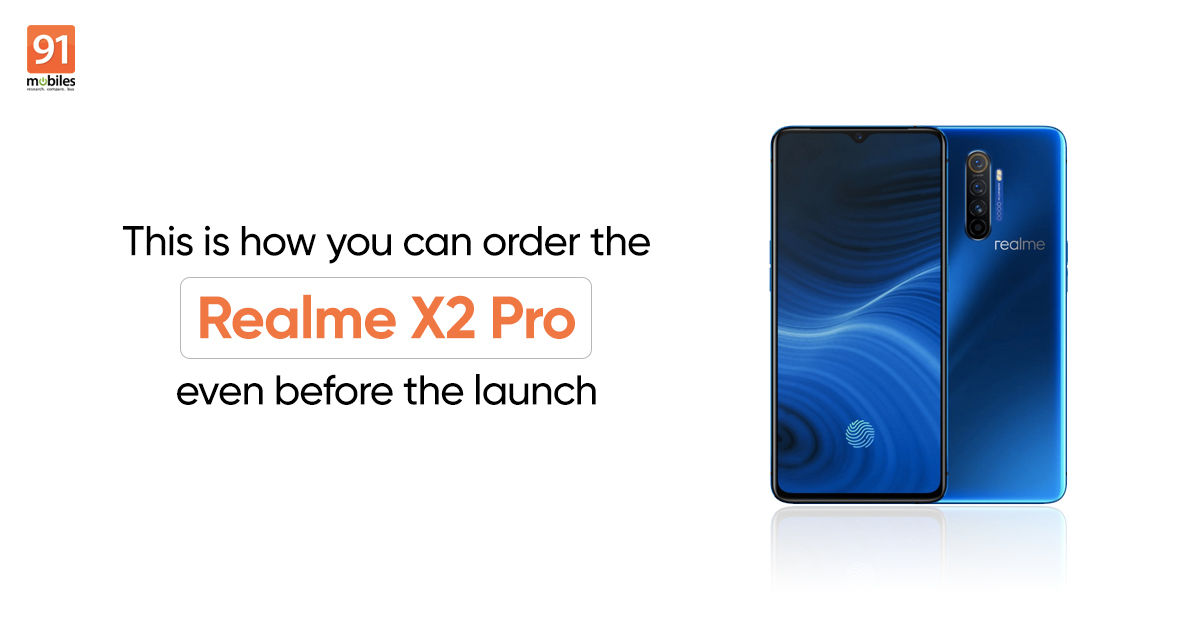 “The Realme X2 Pro can be pre-booked in advance via Realme’s website, with Rs 1,000 down payment”

Update: Realme India CEO Madhav Sheth has tweeted that the cap of 855 customers has been removed. Now, anyone who places a blind order till 11:59pm on Tuesday, November 19th will be able to get the Realme X2 Pro, with no limit to the number of pre-orders.

Received an amazing response to the blind order sale!

So we are no more limiting the orders. Now you can blind order anytime till tomorrow midnight and be among the first to get #realmeX2Pro.https://t.co/Yox1E8twJ5 pic.twitter.com/OvygoApve5

Ahead of the Realme X2 Pro launch in India, the handset’s ‘Blind Order’ sale is live on the company’s website. The sale – which begins today, i.e. November 18th, at 12:30 pm onwards – allows buyers to pre-book the upcoming flagship offering in advance. All they have to do is pay Rs 1,000 while booking the Realme X2 Pro in the ‘Blind Order’ sale. The rest of the amount can be paid between November 20th-21st, post which the handset will start shipping. Realme says that it’ll only start dispatching the Realme X2 Pro from November 20th after the complete payment has been made. It’s worth mentioning that the sale will be live only for the first 855 customers across the country.

The Realme X2 Pro, meanwhile, is slated to break cover in India on November 20th, alongside the Realme 5s. The handset is the first-ever flagship offering from the brand, with octa-core Snapdragon 855 Plus mobile platform ticking at its core. It’s designed to take on Xiaomi Redmi K20 Pro, OnePlus 7/ 7T series, and other affordable offerings in the category.

The Realme X2 Pro also boasts of a 6.5-inch full-HD+ (1,080 x 2,400 pixels) Super AMOLED Fluid display that bears 90Hz refresh rate and 20:9 aspect ratio. The panel has a waterdrop notch, which houses a 16-megapixel Sony IMX471 selfie camera, atop and in-display fingerprint scanner for security. The rear panel of the phone is home to a quad-camera setup, with 64-megapixel Samsung GW1 primary sensor with an f/1.8 lens. This is paired with a 13-megapixel secondary sensor with an f/2.5 telephoto lens, 8-megapixel tertiary sensor with a 115-degree ultra-wide-angle lens that has an f/2.2 aperture, and a 2-megapixel depth sensor.

Software-wise, the handset boots ColorOS 6 with Android 9 Pie out of the box. It’s driven by 4,000mAh battery with 50W SuperVOOC Flash Charge technology for fast charging. Apart from this, the X2 Pro will be equipped with up to 12GB of RAM, up to 256GB UFS 3.0 storage, and connectivity options such as 4G LTE, Wi-Fi 802.11ac, Bluetooth v5.0, GPS/ A-GPS, NFC, USB Type-C, and 3.5mm headphone jack.

The Realme X2 Pro price in India is likely to be around Rs 27,000 for the base 6GB RAM variant. This could go up to Rs 33,000 for the phone’s 12GB RAM option. The handset is available in China with White and Blue colour options with a gradient finish on top. The same hues are likely to debut in India and be up for grabs on Realme’s e-store, Flipkart, offline stores after its official launch.