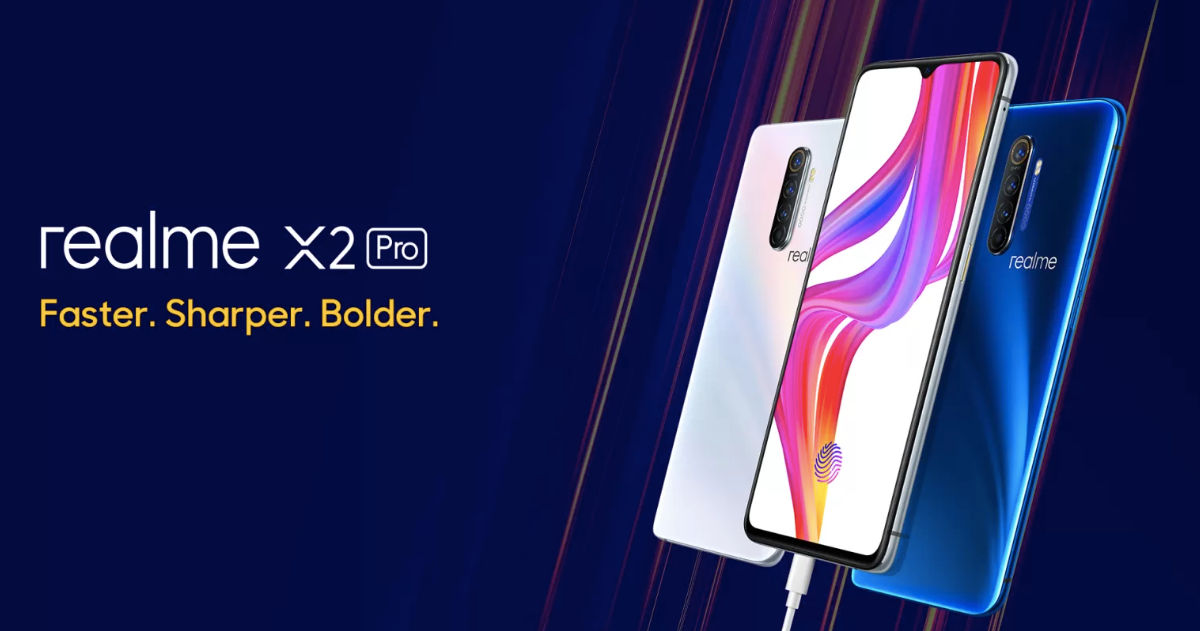 Realme’s first true flagship smartphone, the Realme X2 Pro, has been launched in India. The company took the wraps off the handset alongside the Realme 5s in the country. The new Realme X2 Pro, which was unveiled in China last month, has been designed to take on the likes of the Redmi K20 Pro and OnePlus 7T with its high-end specifications, which include the octa-core Qualcomm Snapdragon 855 Plus SoC, 90Hz Super AMOLED screen, up to 12GB of RAM, quad rear camera setup with 64-megapixel Samsung GW1 primary sensor. But the market-first that the Realme X2 Pro is bringing to the Indian market is the 50W SuperVOOC Flash Charge technology for fast-charging; the brand is bundling the 50W adapter in the box.

The Realme X2 Pro price in India has been set at Rs 29,999 for the base 8GB RAM and 128GB storage variant, while 12GB RAM and 256GB storage option cost Rs 33,999. The handset comes in a couple of colour options, Neptune Blue and Lunar White. The Realme X2 Pro sales begin on 12pm November 26th and end on 11:59pm on November 27th, but it will be invite-only. A small bunch of invites will be shared by Realme India CEO Madhav Sheth on his Twitter page. The invites will be available via Flipkart and Realme.com. As for the launch offer, the Realme X2 Pro will get Jio benefits worth Rs 11,500 and no-cost EMIs for up to 6 months.

Apart from the standard colour options, the Realme X2 Pro also comes in Master Edition variants in Brick Red and Concrete hues, featuring the signature of industrial designer Naoto Fukasawa on the back. The Master Editions will come with 12GB RAM and 256GB storage and are priced at Rs 34,999. These options will go on sale around Christmas.

Moving on to the features and specifications, Realme X2 Pro runs Android 9 Pie with ColorOS 6.1 on top out of the box. The handset features a 6.5-inch Super AMOLED screen with full-HD+ (1,080 x 2,400 pixels) resolution, 20:9 aspect ratio, 90Hz refresh rate, and 1000nits brightness. The screen also bears an in-display fingerprint scanner and a waterdrop notch up top that houses the selfie camera. Other key features of the display include HDR10+ support, DC Dimming, and TUV Rheinland certification for image quality, ambient light management, and EyeCare technology.

At the Realme X2 Pro’s core lies an octa-core Qualcomm Snapdragon 855 Plus SoC, coupled with up to 12GB of RAM. For gamers, the handset has a new feature called Photorealistic Enhancement in Game Space to “enhance the quality, texture, and colour of in-game graphics and to sharpen the edges of the objects.” Other gaming-centric features on the handset include dual-channel network acceleration, 4×4 MIMO, dual Wi-Fi speed-up, and anti-lock gaming antenna. These are in addition to HyperBoost 2.0 and Game Assistant that are already available for Realme phones.

As for the camera specifications and features, the Realme X2 Pro’s array of cameras is headlined by the 64-megapixel Samsung GW1 primary sensor with a 6-element, f/1.8 lens at the back. The camera setup also comprises a 13-megapixel telephoto lens with 20x hybrid zoom; 8-megapixel sensor with a 115-degree ultra-wide-angle lens; and a 2-megapixel depth sensor for portrait images. The camera can record 4K 60fps videos and 960fps slow-motion as well. The phone’s front camera features a 16-megapixel Sony IMX471 selfie sensor with an f/2.0 lens for selfies and video calling. Features such as Nightscape on both the front and rear cameras, Ultra Video Stabilization, HDR video recording, real-time video bokeh, 960fps super slo-mo video recording, and ultra-wide-angle videos.

The phonemaker ships the Realme X2 Pro with up to 256GB UFS 3.0 storage and 5,000mAh battery with 50W SuperVOOC fast-charging support, which is the highest in the country at the moment. The 50W SuperVOOC tech is claimed to charge the 5,000mAh battery from zero to 100 percent in 32 minutes. This is backed by Vapur Cooling tech with superconducting carbon fibre to reduce the temperature by up to 5 percent. Connectivity options on the phone include 4G LTE, Wi-Fi 802.11ac, Bluetooth v5.0, GPS/ A-GPS, NFC, USB Type-C, and 3.5mm headphone jack. Other features of the Realme X2 Pro include Dual Super Liner speakers with Dolby Atmos, a precise tactile engine motor, etc.