Realme X50 5G was the company’s first 5G phone, launched in January this year, and was followed by Realme X50 Pro 5G in February. The company had already promised to introduce five 5G phones before the end of this year. Now, in line with that commitment, the brand seems to be gearing to launch the third 5G smartphone as Realme on Weibo announced that a new 5G smartphone will be added to the family as early as tomorrow. While Realme hasn’t revealed much about the upcoming 5G phone, there is a possibility it might just reveal the phone’s name for now along with the launch date. The handset will be promoted by Chinese actress Yang Zi. 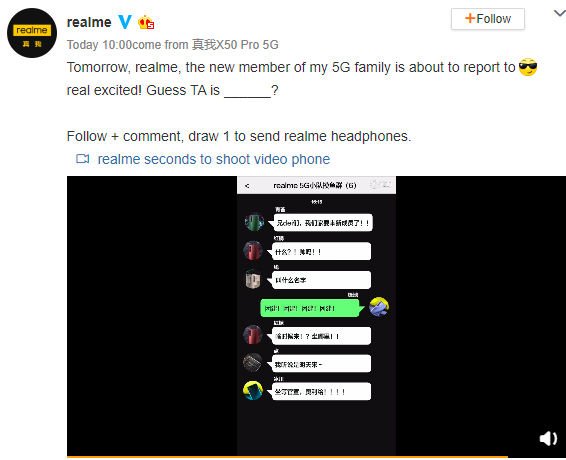 While speculations are rife that it could be the Realme X50 Youth Edition 5G, rumours hint that it could be the Realme X3 that recently passed through TENAA as well as China’s 3C certifications. Another Realme phone with model number RMX2052 has also received 3C approval, but it is yet to appear on TENAA. The listings of both the phones suggests they will ship with 30W fast-charging support. It could also be the Realme X60 5G that was tipped to be in the works recently. The Realme X50 Youth Edition is said to arrive with 48MP primary lens coupled with an 8-megapixel secondary sensor and a couple of 2MP lenses. At the front, it is said to feature an 8MP ultra-wide-angle lens and a 2MP depth sensor.