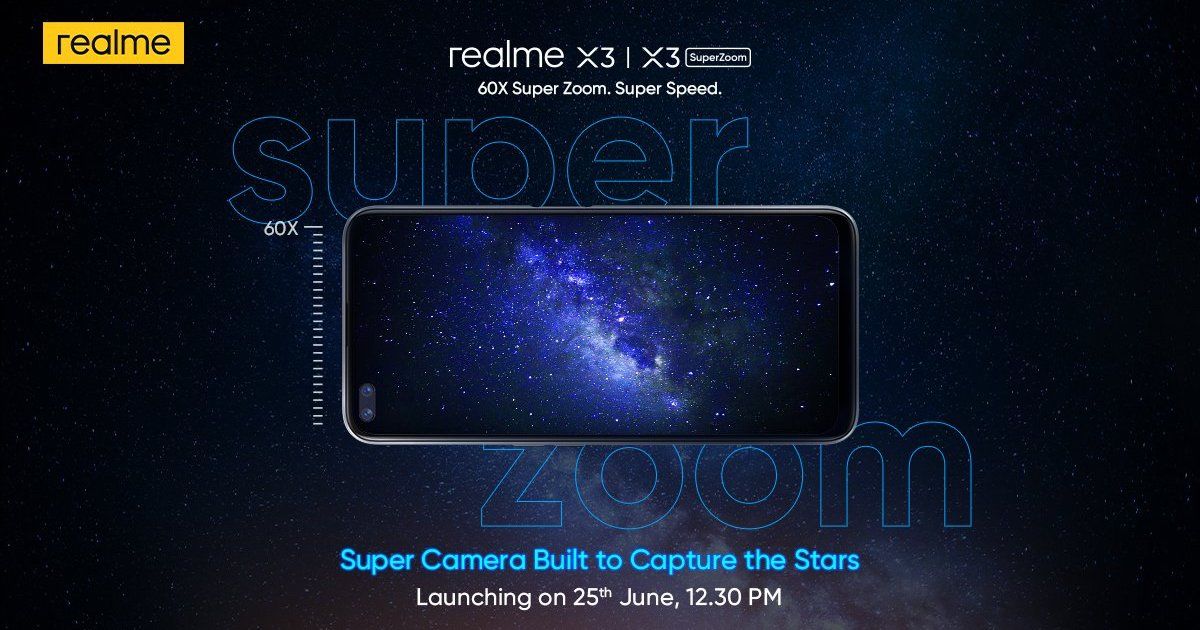 Realme X3 series India launch date has been revealed by the company. Both the Realme X3 SuperZoom and the vanilla Realme X3 flagship phones will launch in India on Thursday, June 25th through an online event at 12:30 PM IST. Realme X3 specifications are expected to be similar to the X3 SuperZoom – which has already been launched in Spain – but with some differences with regards to the camera setup. To recall, the Realme X3 SuperZoom is powered by Snapdragon 855+ SoC and sports a 120Hz display. Other highlights of the phone include 64MP quad rear cameras with up to 60x zoom, edge-to-edge punch-hole display, and 30W fast charging support.

#TheXIsHere with a super camera built to capture the stars & a starry mode available for the first time on a #realme smartphone with 4th generation of Super Nightscape!#60XSuperZoomSuperSpeed
Launching #realmeX3 & #realmeX3SuperZoom on 25th June, 12:30 PMhttps://t.co/v7Xkm8HALx pic.twitter.com/QfhHwgxyWT

Realme X3 series will be the successor to the company’s reasonably successful Realme X2 from last year. The handset is likely to sport a 6.6-inch Full HD+ LCD display with an elongated punch-hole cutout and 120Hz screen refresh rate. The handset could be powered by 2.9GHz Qualcomm Snapdragon 855+ SoC paired with up to 12GB RAM and 256GB internal storage. The Realme X3 series will boot Android 10-based One UI 2 out of the box.

In the camera department, the Realme X3 and X3 SuperZoom both could sport 64MP quad rear cameras, but only SuperZoom variant may come with up to 60x digital zoom. Up front, the phones may house a 32MP main camera and an 8MP wide-angle lens for selfies and video calling. The Realme X3 SuperZoom also supports Dolby Atmos and DTS sound.

The complete specifications of Realme X3 and Realme X3 SuperZoom are likely to be announced at the launch event, along with their prices in India.