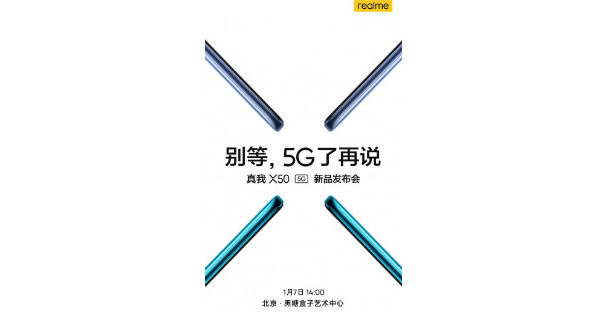 As per previously leaked specifications, Realme X50 5G would flaunt a 6.44-inch full HD+ S-AMOLED display with a 90Hz refresh rate and an impressive screen-to-body ratio. It is likely to run on ColorOS 7 but based on Android 9.0 Pie. However, the Android 10 update should be rolled out shortly. The device is expected to be available in three variants: 6GB + 128GB, 8GB + 128GB, and 8GB + 256GB storage. It is already known the Realme X50 5G will have dual-mode 5G connectivity.

As for the cameras, Realme X50 5G is expected to house a vertically-arranged quad-camera setup with 64MP Sony IMX686 primary sensor, an 8-megapixel ultrawide lens, a 2-megapixel macro lens, and a 2-megapixel depth sensor. For selfies, it is said to rock a 32MP sensor and an 8MP wide-angle lens in the pill-shaped punch-hole cutout. The handset is tipped to pack a 4,500mAh battery.

As for the Realme X50 Lite 5G (Youth Edition), it is said to pack a 6.55-inch IPS LCD display and will be powered by the MediaTek MT6885 and will have 5G connectivity as well. It is said to be available in two variants: 6GB + 64GB and 8GB + 128GB storage that might be further expandable. Realme X50 Lite will have a quad-camera setup at the back with a 16-megapixel primary lens, an 8-megapixel wide-angle lens, a 2-megapixel macro lens, and a 2-megapixel portrait lens. For selfies, it is said to rock a 32MP sensor. It packs a 5,000mAh battery with VOOC 4.0 Flash Charge support. We should learn more information in the coming few days.