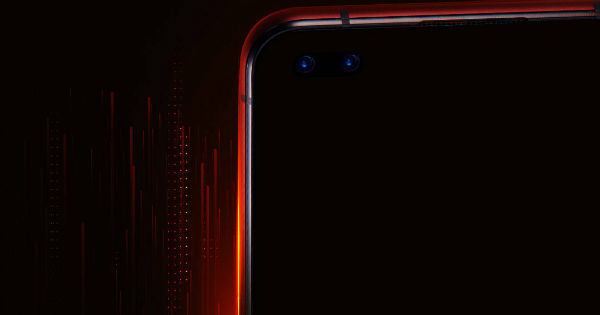 Realme X50 Pro will launch on February 24th in Madrid and India as well. The handset is already known to come with Snapdragon 865 SoC, dual-mode 5G connectivity, Android 10-based Realme UI and 65W SuperDart fast charging tech, among other things. On the camera front, the company has also confirmed a 64MP quad camera setup. A new teaser has now revealed that the Realme X50 Pro will have a 32MP selfie camera. The phone will offer a pill-shaped dual punch-hole cutout that will include a 32MP primary camera and a wide-angle secondary lens. The teaser poster shows the top frame in a red colour along with antenna lines.

Realme X50 Pro will rock a Super AMOLED display with 90Hz refresh rate, an in-display fingerprint sensor and Corning Gorilla Glass protection. It will be powered by the Qualcomm Snapdragon 865 SoC paired with up to 12GB LPDDR5 RAM and up to 256GB storage that could be further expandable. Notably, the Realme X50 Pro will pip the iQOO 3 as India’s first 5G smartphone. The handset will ship with Android 10-based Realme UI 1.0 custom skin. The Realme X50 Pro is confirmed to come with 65W SuperDart fast charging tech, but the battery capacity is a mystery for now.

The Realme X50 Pro will feature a 64MP Sony IMX686 sensor, accompanied by three other sensors at the back. A recent poster image confirmed 20x hybrid zoom, similar to the Realme X2 Pro. That’s all we know about the Realme X50 Pro flagship offering at the moment, but with the launch inching closer, we don’t have to wait for much longer. Stick around.