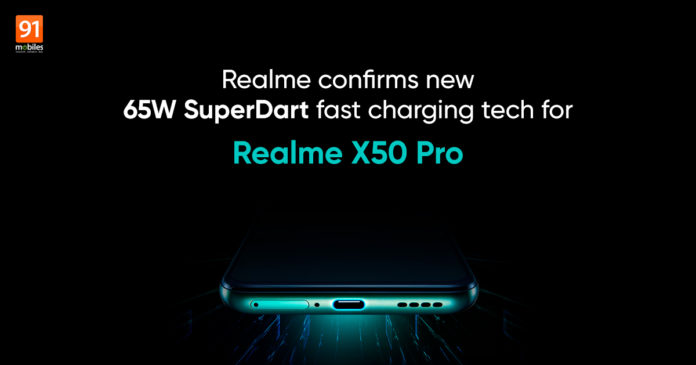 Realme X50 Pro 5G will be launching on February 24th with a new 65W SuperDart fast charging technology. While the company won’t be able to make its MWC debut now, it plans to telecast the launch from Madrid. Realme VP had recently revealed key Realme X50 Pro specifications, including the Snapdragon 865 SoC, 12GB RAM and 256GB internal storage, Android 10 with Realme UI 1.0 and NFC connectivity. Now, in a new teaser poster, Realme X50 Pro 65W Dart fast charging support has been confirmed. Realme India CEO, Madhav Sheth on Twitter claimed that with the new charging technology, there won’t be any heating while charging and will also offer enhanced battery life.

The Realme X50 Pro 5G will have a dual-punch hole display, similar to the Realme X50. It should come with 90Hz refresh rate and Corning Gorilla Glass layer on top. While it’s not confirmed, the handset could have an AMOLED panel with an in-display fingerprint sensor for security. Apart from 12GB RAM and 256GB storage, there could be other variants as well. In terms of optics, the Realme X50 Pro 5G could have a quad-camera setup with a 64MP Sony IMX686 Sensor, an ultra-wide-angle lens, a telephoto lens and a depth unit.

Realme X50 Pro 5G could support wireless charging since the company now has a wireless charging pad and the smartphone pack a beefy battery. However, details regarding the front-camera optics, display size, and other features are scarce at the moment, but since the launch is not too far away, we don’t have to wait much longer. Realme X50 Pro could launch in India after its global announcement, as hinted by CEO, Madhav Sheth.