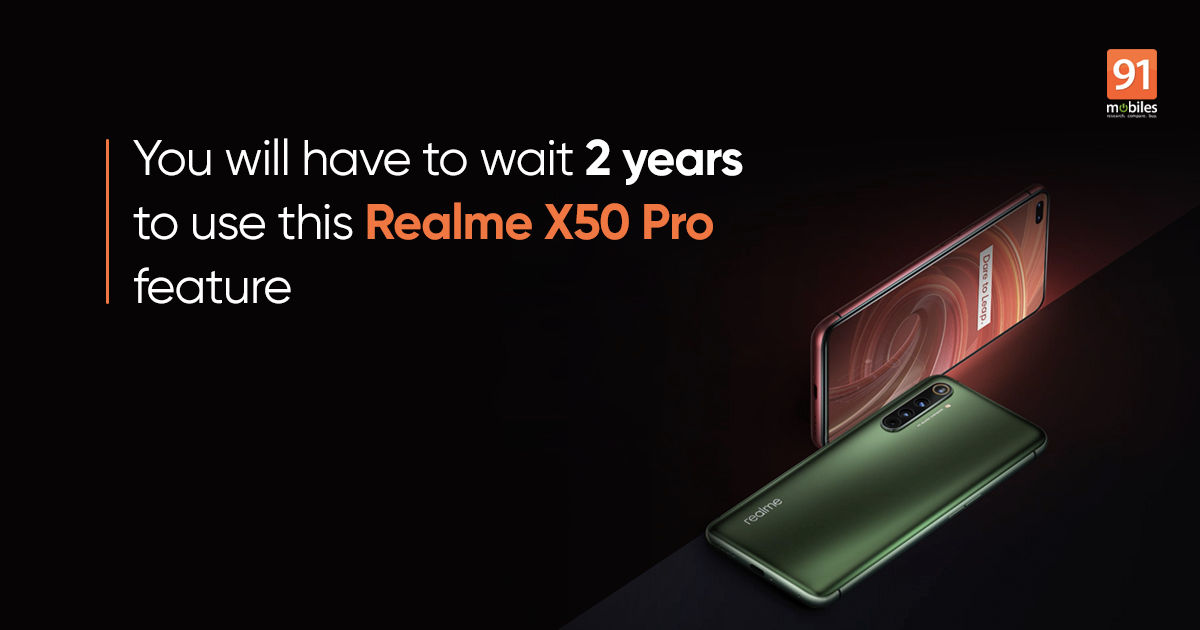 “Realme X50 Pro comes with top-of-the-line specs including Snapdragon 865 chipset and 65W fast charging support, all at an affordable price”

Realme launched its flagship X50 Pro smartphone on Monday and created a strong buzz in the entire industry, thanks to the handset’s remarkable features at an affordable price point. Although Realme X50 Pro has a loaded spec sheet, there is one feature in particular that you won’t be able to use and appreciate till at least next year. You might have guessed it already but in case you haven’t, we are talking about 5G support. While the Realme X50 Pro comes with support for 5G, till the time commercial rollout of 5G in the country is not carried out successfully, you will not be able to enjoy this feature. If we go by an Economic Times report from late last year, this wait could extend to as long as 2022.

In the said report, Economic Times cites Swedish gear maker Ericsson as saying “5G subscriptions are expected to become available in India only in 2022.” Notably, earlier this rollout was expected to start later this year itself. As per the report, the primary reasons why telecom operators will not be able to commercially roll out the next-generation wireless technology this year include “exorbitant base prices, insufficient spectrum, and unavailability of newer bands.” This effectively means that Realme X50 Pro users will have the functionality available in their phones when 5G is eventually made available for the general public, but till then they will have to suffice with 4G LTE speeds.

As you might imagine, there are plenty of 5G smartphones set to launch this year in India. Starting with the iQOO 3 5G, which launched earlier today, the handset has been launched with a price tag of Rs 44,990. Upcoming phones, such as the ones from OnePlus 8 series, Samsung Galaxy Note series, and iPhone 12 series, are all expected to support 5G connectivity. However, we will have to wait and see if the brands will choose to launch a 4G-only variant of their phones in India till the time 5G is not commercially rolled out here as that will help keep costs down. We have already seen this happen with Samsung Galaxy S20 Ultra as the brand launched only the 4G variant of the phone in the country. Apart from IQOO 3 5G, we will have to wait for confirmation from brands to figure out the phones that will come with 5G support in India.

Which telecom companies will deploy 5G in India?

While this may appear as a basic question, the answer is not so basic. Major telecom operators in India were recently fined heavily by the Department of Telecom (DoT) and to make the matters worse, Vodafone-Idea and Bharti Airtel have been posting quarterly losses in revenue due to competitive pricing too. The only profitable telecom company in India, Reliance Jio, is expected to be the flagbearer for 5G in India. And although Mukesh Ambani-led company has the financial prowess to make the transition, the eventual decision might be driven by the return on investment. If the early adopter advantage, which itself might be debatable in a developing nation like India where service cost is a huge factor, does make financial sense for Reliance Jio, we might see the company pulling the commercial 5G rollout to an earlier time frame.