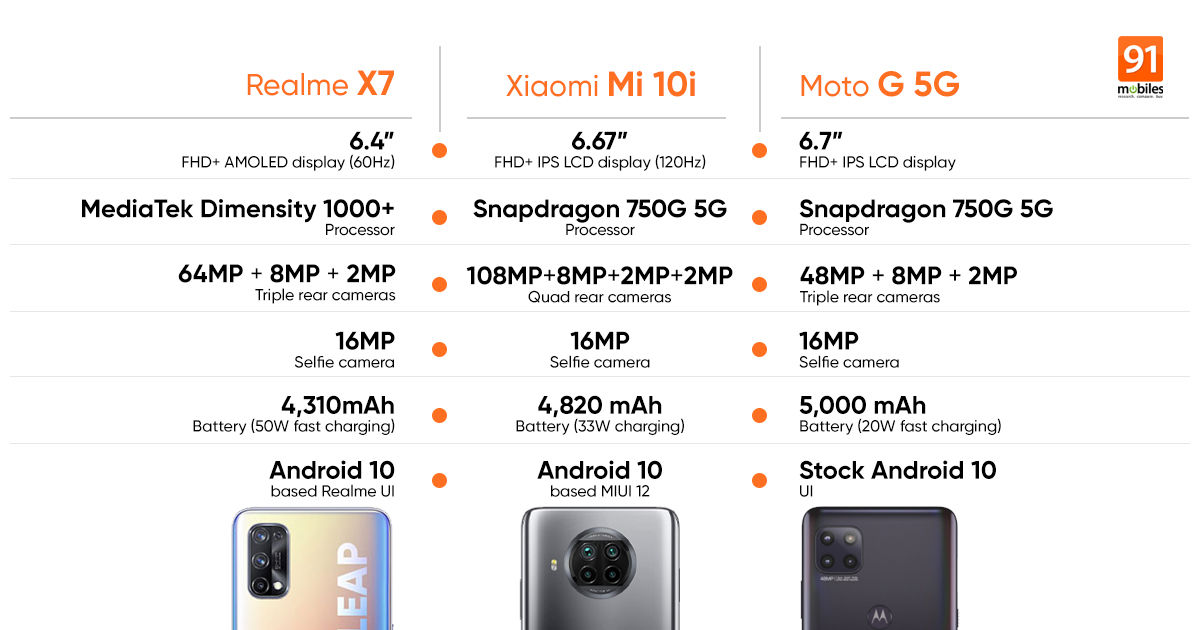 The Realme X7 is the most affordable 5G-ready smartphone in India right now. Here’s how it compares against the similarly-priced Xiaomi Mi 10i and Moto G 5G.

Realme X7 is the latest 5G phone to launch in India, and the most affordable one at that! It unseats the Mi 10i and Moto G 5G as the cheapest 5G-capable smartphone you can buy in India today thanks to a Rs 2,000 price advantage it has over the competition. But that’s the only noteworthy difference between Realme X7 and its rivals by Xiaomi and Motorola. Wondering what else the most affordable 5G phone in the market brings to the table to push the competition to the edge? Well, let’s take a look at the Realme X7 specifications, price in India, and features and compare them with those of Mi 10i and Moto G 5G to find out which smartphone comes out on top in this race.

As we mentioned above, the Realme X7 price in India puts it at an advantage over the rivals as it costs only Rs 19,999 for the base 6GB RAM + 128GB storage variant. The phone’s 8GB + 128GB variant is priced at Rs 21,999. Both variants will go on sale in India starting February 12th at 12pm via Flipkart and Realme.com.

The base variant of Mi 10i, priced in India at Rs 20,999, gets you 6GB of RAM but only 64GB of internal storage. That’s half of what the Realme handset offers despite the higher price tag. If you want the 6GB + 128GB configuration on the Xiaomi handset, you will have to shell out Rs 21,999. However, both these variants are out of stock on Mi.com and Amazon.in. In fact, the only Mi 10i variant available for purchase in India at the time of writing is the 8GB + 128GB option, priced at Rs 23,999. That’s a pretty high price considering the Realme model is Rs 4,000 cheaper.

Realme has also sweetened the pot a little with its ‘Realme Upgrade’ program that lets you pay 70 percent of the Realme X7 retail price upfront and the remaining amount a year later (should you choose to keep the smartphone, that is). This effectively drives down the Realme X7 price in India for the first year to just Rs 13,999!

Realme X7 vs Mi 10i vs Moto G 5G specifications

Of the three, only the Realme X7 comes with an AMOLED screen. However, its 6.4-inch FHD+ panel is marginally smaller than that of the other two devices. The Moto G 5G has the largest screen of the lot: an FHD+ 6.7-inch IPS LCD HDR10-ready panel. However, the Mi 10i is the only device of the lot that features a 6.6-inch FHD+ panel clocked at 120Hz. Both the Mi 10i and Realme X7 screens come with unique advantages and disadvantages, and it all boils down to a matter of choice. Although a 120Hz screen looks good on paper, its novelty dies out after a few weeks of use. At the very least, the Realme X7’s AMOLED panel can translate to marginal battery efficiency. That said, the Mi 10i is still the better choice here because it is the only smartphone of the three that comes with a layer of Corning Gorilla Glass 5.

Our Mi 10i review determined that the smartphone is capable of capturing stunning images. Furthermore, it is the only device of the three that can shoot slow-motion videos at 960fps. Hence, the Xiaomi Mi 10i is the better device here.

The 5,000mAh battery of Moto G 5G supports fast charging at 20W. The Xiaomi Mi 10i reduces the overall capacity to 4,800mAh but increases the charging speed to 33W. Lastly, the Realme X7 features a 4,310mAh battery that can be charged at an impressive 50W. It is hard to crown a winner here, as the Realme X7 trades raw capacity for charging speed, while the Moto G 5G does the opposite. The Mi 10i sits in the sweet spot that strikes a balance between the two. It is also the only device of the three that comes with an IR blaster, a little-used feature that only Xiaomi seems to care about.