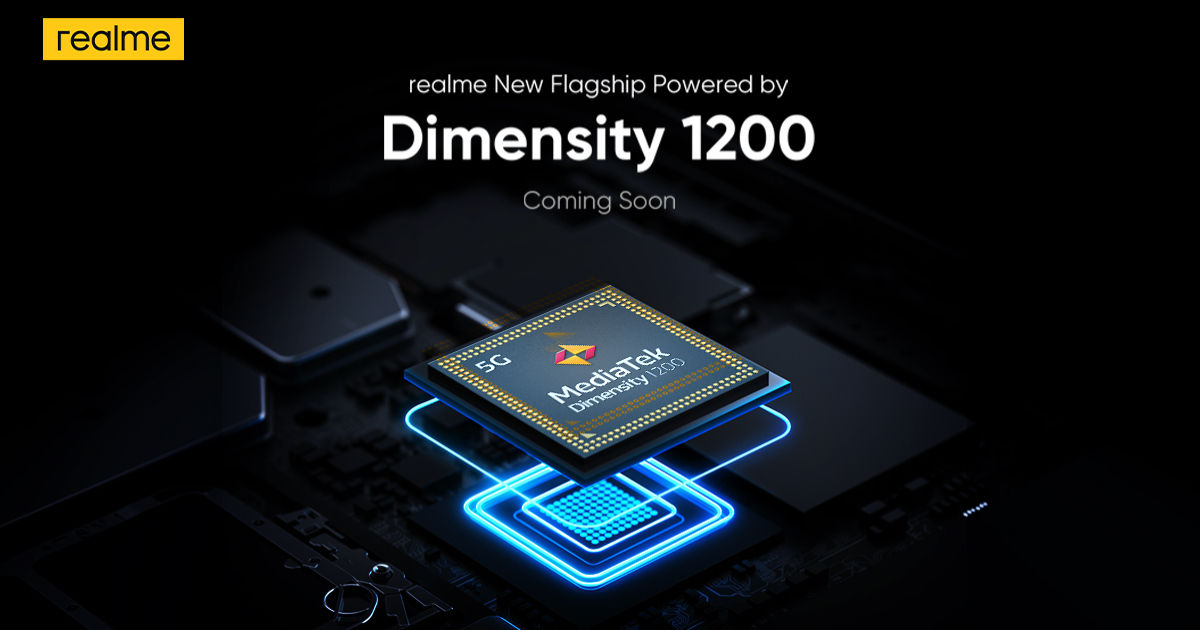 Realme has announced that it will be among the first brands to launch a flagship phone with the all-new MediaTek Dimensity 1200 chipset. The company’s India CEO Madhav Sheth tweeted the same along with the hashtag #XisTheFuture, which suggests the Dimensity 1200-powered phone will be the upcoming Realme X-series device. However, other details of the handset are kept under wraps, for now. Separately, GSMArena citing internal sources claims the upcoming device will be called Realme X9 and not the Realme X7 as previously thought. The rear portion of the phone is visible, where we can see the Realme logo, ‘Dare To Leap’ tagline, and a gradient colour finish. The USB Type-C port, speaker grille, and microphone are at the bottom. Interestingly, the 3.5mm audio jack is missing.

Another step towards becoming a #Leaderof5G!@MediaTekIndia is launching its new Dimensity Flagship 5G Smartphone chip and #realme would be one of the first to release a smartphone featuring it.

Not much else is known about the Realme X9 specifications at the moment, but the phone is expected to succeed the Realme X7 series. To recall, the Realme X7 flaunts a 6.4-inch FHD+ Super AMOLED display with a 60Hz refresh rate, punch-hole design, and slim bezels. It is powered by the MediaTek Dimensity 800U SoC paired with up to 8GB RAM and 128GB storage. The phone runs on Android 10 OS with RealmeUI custom skin overlaid on top. Connectivity features include 5G, 4G LTE, dual-band Wi-Fi, Bluetooth, GPS, and USB Type-C port. The device packs a 4,300mAh battery and supports 65W fast-charging. There is a 32MP snapper on the front and an in-display fingerprint sensor for security.

The Realme X7 Pro specifications are similar to Realme X7, albeit with few upgrades. The phone has a large 6.55-inch Super AMOLED display with a 120Hz refresh rate and punch-hole cutout for the selfie camera. It is powered by the MediaTek Dimensity 1000+ SoC coupled with up to 8GB RAM and 256GB storage. The phone runs on Android 10 OS with Realme UI custom skin on top. Moving to optics, the Realme X7 Pro’s quad-camera setup includes a 64MP primary camera, an 8MP wide-angle lens, a 2MP macro lens, and a 2MP black and white lens. There is a 32MP snapper on the front and an in-display fingerprint sensor for security. The phone packs a 4,500mAh battery with 65W fast charging support. Both the phones come with 5G, 4G LTE, dual-band Wi-Fi, Bluetooth 5.0, GPS, and USB Type-C port.