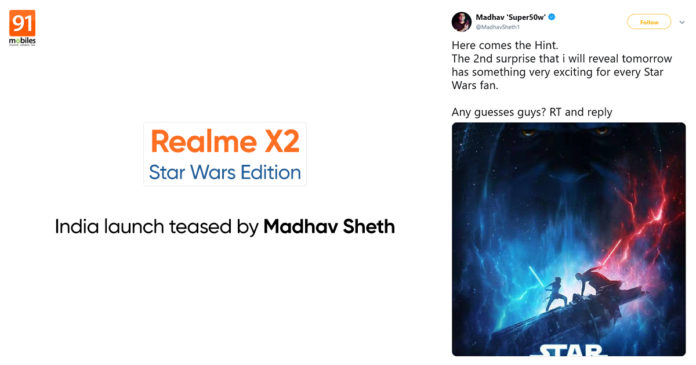 Here comes the Hint.
The 2nd surprise that i will reveal tomorrow has something very exciting for every Star Wars fan.

Realme XT 730G will look similar to the Realme XT that launched in India a few months ago. The biggest difference is the processor. While the Realme XT comes with a Snapdragon 712 SoC, the Realme XT 730G will feature a faster Qualcomm Snapdragon 730G SoC, coupled with up to 8GB memory and 256GB native storage. While MySmartPrice reports that the device may come with 4GB RAM, the same seems slightly unlikely since special edition devices are typically reserved for the top variants. However, on the flipside, it is also possible that Realme markets multiple variants of the Realme XT 730G under the Star Wars moniker, in a bid to push its sales even further in the mid-range category.

Other Realme XT 730G specifications include a quad-rear camera module with 64-megapixel primary image sensor, a 32-megapixel single camera front imaging module placed in a waterdrop notch on the display. The display itself is 6.4 inches in size, with full HD+ resolution. The entire setup runs on a 4,000mAh battery, with 30W VOOC fast charging support. Adding the Star Wars tag to the device will seemingly include a Light Saber speckle towards the bottom of the phone’s rear, the Star Wars branding, the pink-purple gradient paintjob, and possibly, special interface elements.

While Realme has grown at rapid pace since introducing itself last year, it is still some distance away in terms of market share from prime rival, Xiaomi. Special edition smartphones such as the Realme X2 or Realme XT 730G Star Wars Edition are likely aimed at improving this share by adding relatability among young buyers.