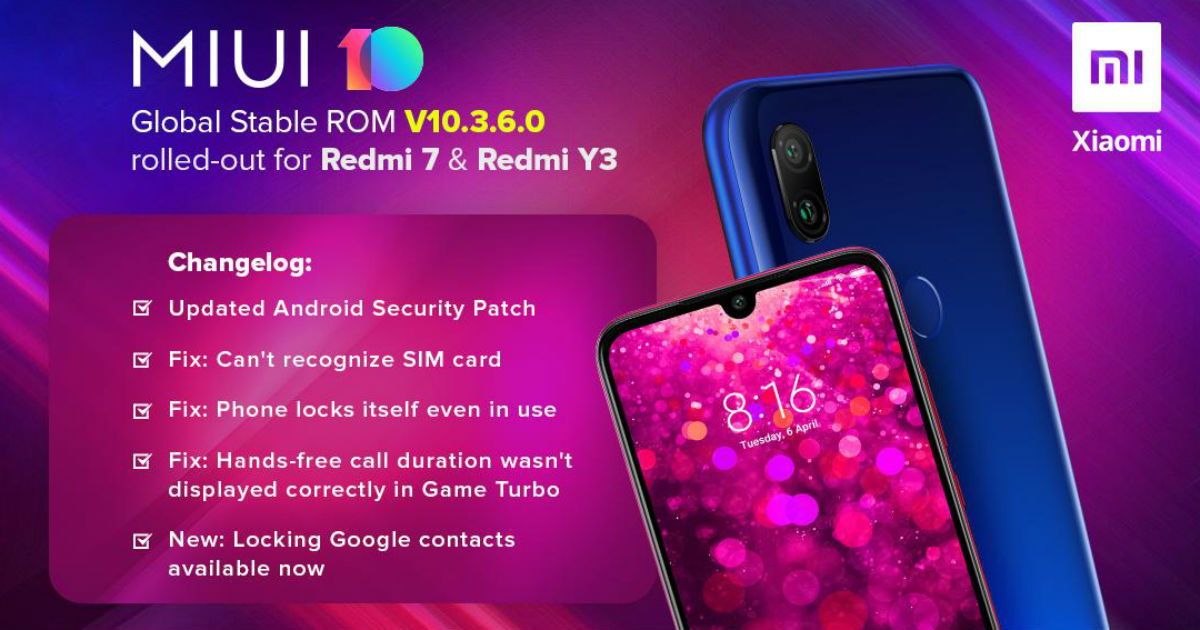 “The changelog for the update includes critical SIM connectivity and phone call fixes, along with the latest security patch”

Xiaomi has announced the release of its latest MIUI stable build v10.3.6.0 for its Redmi 7 (review) and Redmi Y3 (review) devices. Announced via the official Twitter handle, the MIUI 10 stable build brings with itself the latest Android security patch issued by Google, alongside a standard array of patches and fixes. The new global standard ROM continues Xiaomi’s escalated efforts to push more frequent updates to all of its devices, even as it prepares for the rollout of its upcoming ROM, MIUI 11.

The update changelog, shared by Xiaomi on its MIUI India handle on Twitter, includes the “updated Android security patch” without mentioning the month of the updated. Furthermore, the update comes with a fix for an issue where the Redmi 7 and Redmi Y3 could not recognise compatible SIM cards due to a firmware issue, leaving users in the dry without connectivity at hand. The ROM update also patches an issue where the respective smartphones would lock the screen in the middle of usage, creating unnecessary disturbances in usage.

Mi fans, here’s an update for #32MPSuperSelfie & #UltimateAllRounder. Yes, you read it right.

Finally, the third patch fixes the call duration time stamp in the middle of the Game Turbo mode in the UI. In terms of new features, the MIUI v10.3.6.0 update comes with the ability to lock access to Google Contacts, which helps add a tertiary layer of security over and above the biometric locking of the phone’s software. The Redmi 7 and Redmi Y3 were launched at the same time, and are powered by the same octa-core Snapdragon 632 processor. Both the devices feature the waterdrop notch design, similar camera layout, fingerprint sensor placement and branding, essentially making them twin devices with similar specifications.