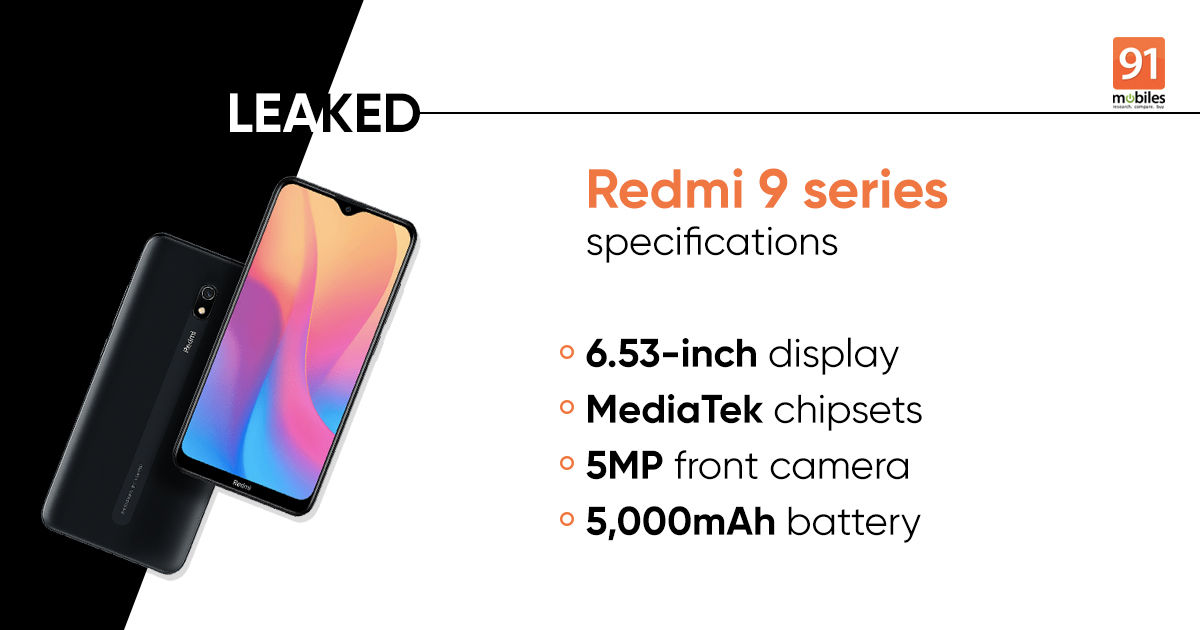 Redmi 9 is widely expected to bet the next budget smartphone from Xiaomi. The handset was recently spotted on the BIS certification, which suggested its imminent launch in India. Now, tipster Sudhanshu Ambhore has revealed the Redmi 9 specifications and price. We are also told that the Redmi 9 will be accompanied by the Redmi 9C and Redmi 9A. The Redmi 9A is likely to be the most affordable phone in the lineup. Here’s what the tipster has revealed regarding the Redmi 9 series specs and prices.

Coming to the specifications, all three Redmi 9-series phones will reportedly feature a 6.53-inch IPS LCD display. While the Redmi 9 is said to come with a full-HD+ (1,080 x 2,400p) resolution, the Redmi 9C and Redmi 9A are likely to support HD+ (720 x 1,600p) resolutions. The handsets will pack a 5,000mAh battery, but there is no mention of fast charging support. Additionally, all three Redmi 9 phones will feature a rear-mounted fingerprint scanner, accelerometer, gyroscope, light sensor, proximity sensor, USB Type-C port, 3.5mm audio jack and infrared blaster.

Under the hood, the Redmi 9A will allegedly be powered by entry-level Helio A25 SoC paired with 3GB of RAM and 32GB storage onboard. The Redmi 9C could rock Helio G35 aided by 3GB of RAM and 64GB storage, whereas the top-end Redmi 9 will reportedly house Helio G70 SoC with 4GB of RAM and 64GB storage. All models are likely to feature dual nano-SIM slot and a dedicated slot for microSD card to further expand the storage up to 512GB. The Redmi 9C is tipped to come in two variants: one with NFC and the other without NFC.

The Redmi 9-series phones’ camera setup is also different from one another. The entry-level Redmi 9A is tipped to sport a single 13MP rear camera setup, while Redmi 9C NFC edition may feature 13MP + 2MP dual camera setup at the back. The non-NFC version of the phone could sport an additional 2MP shooter. The Redmi 9, in contrast, will allegedly rock quad rear cameras with 13MP primary sensor, 8MP secondary sensor, 8MP third sensor, and finally, a 2MP fourth sensor. As for the selfie camera, the Redmi 9 series is said to feature a 5MP sensor on the front.